This figure from EPI shows the fanning out of real hourly wages, indexed to 100 in 1973, over the last few decades. Clearly, the top continuously pulls away from the pack, as can be seen by the lines for the 90th and 95th wage percentiles.

But the slide also shows ways in which the shape of inequality, at least regarding wages, has changed over these years. 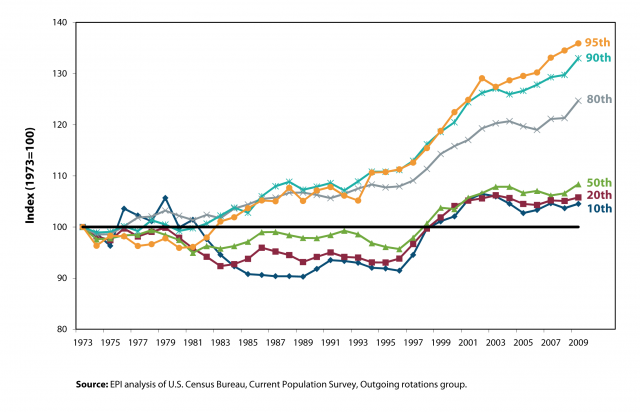 There was little wage inequality in the 1970s, but in the 1980s, the bottom was falling, the middle flat, and the top rising -- a basic fanning out of the wage distribution.

The latter 1990s were once again different. The high end continued to rise but low and middle real wages grew together, and at a pretty decent clip. The cause of the nice bump was the full employment conditions that prevailed for a few years back then, and as I've stressed, that dynamic leads to broad-based growth which pushes back against rising inequality.

Middle and low-wages flattened in the much weaker job market of the 2000s, while the top just kept on ticking.

One other point on this -- a hypothesis, really, and one that needs work but is likely important. I pointed out above that faster growth and especially lower unemployment was inequality-reducing, but I believe there's a feedback loop here. Full unemployment delivers more broad-based gains, and this feeds back into longer, more durable, and just plain better recoveries.

I'd go further -- still in hypothesis mode, but I'll bet I'm right. High levels of inequality depress longer-term growth by depressing more broad-based consumption -- you end with a lot going on at Walmart and Nordstrom without enough going in the middle -- and dampening investment both in human and physical capital.

There's a bit of research on this point, and it's a least mildly supportive of the above contentions, but more to come on this, I assure you. If I'm right, it's an important and underappreciated downside of high inequality.