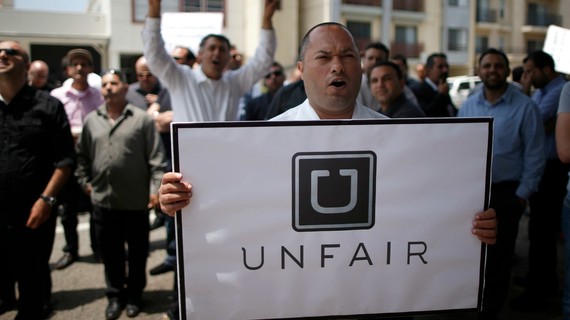 Fifty billion dollars is a lot of money. It's more than the gross domestic product of Costa Rica. It's nearly twice as much as the NASA program building rockets to go to Mars. And it is more than 16 times the amount it took to decode the human genome.

You can do a lot with that kind of money, but one thing you can't do, evidently, is run a company called Uber while also treating customers and drivers fairly.

The $50-billion company that upended the for-hire car industry is receiving appropriate scrutiny for its impact on local economies, jobs, the environment and civil liberties. And it's not alone. Other businesses operating in the so-called "sharing economy" are also proving to create as many problems as they solve.

To be fair, I am a frequent Uber user, my home has sometimes been listed on Airbnb and I've had groceries delivered by Instacart. But as I use these services, I find myself thinking about who is sharing in the newfound success of these companies--and more importantly, who isn't. The balance between capitalism and social wellbeing is an ever-moving target, and today, that target is moving a lot faster.

Sharing but Not Caring

In general, sharing economy companies explain their business as providing a platform for peer-to-peer consumerism, creating a network of would-be entrepreneurs. The unspoken implication is that as a facilitator of commerce, the company holds minimal responsibility for the impact of that commercial activity. Thus, by design, sharing economy models minimize company risk by passing it on to customers, workers and communities.

The United States has numerous laws on the books crafted to protect workers and consumers--and none of them were written with the sharing economy in mind. In September, the House Committee on Energy and Commerce Subcommittee on Commerce, Manufacturing, and Trade held a hearing on the sharing economy. Co-Director for the Center for Economic and Policy Research Dean Baker said in his testimony:

"The country has built up an extensive regulatory structure over many decades to protect workers, consumers, and property owners. The sharing economy will require the modernization of this regulatory structure...Many of these regulations serve important public purposes. If the sharing economy is used as a way to circumvent them, then it will impose substantial costs on society." (emphasis added)

As the biggest and richest company on the block, Uber has drawn more criticism than some other sharing economy companies--and it should. Consider the business model. Uber shifts economic risk and cost by classifying all of its drivers as independent contractors. This has liberated Uber from higher labor force costs, more robust insurance policies and the day-to-day expenses of providing a driving service.

And it has also taken them to court. In September this year, California Uber drivers brought a class action lawsuit against the company, arguing that they are employees (not just contractors) and are therefore entitled to reimbursable costs.

There are other problems: Uber is reducing the number of for-hire vehicles that can serve people with disabilities in San Francisco; with 30,000 vehicles on the streets of New York City, it is contributing to traffic congestion and cascading social, economic and environmental costs; and in Chicago, Uber cars ignore the mandates for location reporting, camera systems and other consumer protections that have been written for the city's taxi industry. These are all real problems that yield real harm.

But it's not just Uber running amuck in the legal and ethical gray areas the sharing economy creates. The peer-to-peer rental company Airbnb connects homeowners who rent personal properties from one another the way they might book a hotel room. This is achieved through an online exchange where AirBnB users present a profile for themselves, as well as their property. Sounds great.

Harvard Business School revealed that African American Airbnb hosts (identified through their profile photo) charged 12 percent less than non-black hosts, which was a function of a marketplace where users were willing to pay more to stay in a home owned by non-blacks. This example of implicit racism seeping into the marketplace has been seen previously in other cases online. A 2011 study from scholars at Yale and Harvard found that on eBay, baseball cards held by a dark-skinned hand in the photo sold for 20 percent less than cards held by a hand with lighter pigment.

Rallying the Community to Action

The growth that sharing economy companies enjoy is derived in large part from the word-of-mouth buzz its customers create. Yet, these patrons do not receive in-kind advocacy for the challenges in their community. Consumers are promoting these businesses; why aren't these businesses promoting community wellbeing?

There is a definite irony here. Workers, consumers and the communities in which these companies operate are fundamental components of the sharing economy. Failing to address their needs and concerns means a company is inadvertently hurting the very people who keep it in business. A company that ignores its social and environmental impact in lieu of a rigid for-profit perspective will be challenged to cultivate positive brand awareness, grow their volume and frequency of customers, and compete in an increasingly crowded marketplace.

And this is where communities have an opportunity to demand a better standard from sharing economy companies. Consumer sentiment is more powerful in the aggregate, and with the advent of the Internet and resulting digital globalization, communities can act as an entity. No longer do disparate citizens languish unconnected and silent. They can express their views, relay anecdotes and rally support for a given concern. Uber and its ilk need to hear the message that power exists on both sides of the commercial equation, and it's up to us, the purchasing public, to ensure they do.

There are no easy solutions here, but nothing worthwhile is ever easy. Citizens need to leverage the power of social media and digital communication to voice their concerns and demand a response. Companies need to look closely at their earnings and competitors and realize that profit and community consideration are not mutually exclusive; in fact, they are mutually dependent. And the public and private sectors need to embrace formalized partnerships to ensure there is a systematic effort to address community harm arising from the sharing economy.

When revenue is measured in billions of dollars, including community needs in business plans should not be a hard sell. After all, smaller businesses and startups have done far more while earning far less. Contributing to the community's needs is not a matter of size or money; it's a matter of will. The more sharing economy companies take steps to weigh and address community needs in their business strategies and operations, the more sense it makes for them, their workers, and their customers.

And that's something worth sharing.