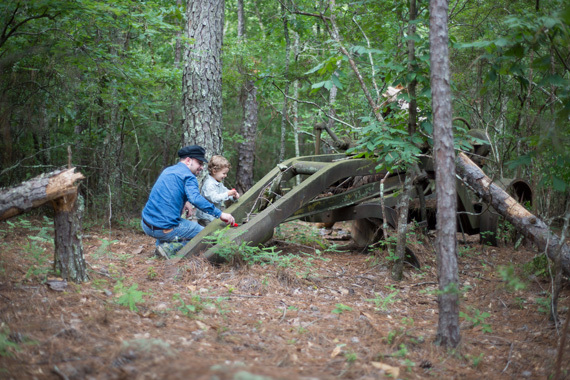 Joel Tauber, Attempting To Restore Happyville (photo, 2013) from the art installation and movie, The Sharing Project.

I've been struggling for the last couple of years to understand the concept of sharing and how to teach it to our young son Zeke. We have a lot of questions. Why should we share? When should we share? How much should we share? Are we acting consistently? If sharing is a value that we should all embrace, then why is there so much poverty in our very rich country?

As we've been wrestling with these questions, I've been talking to experts in philosophy, evolutionary biology, psychology, history, anthropology, economics, politics, and education.

A conversation with the anthropologist David Graeber is one of the many that continues to resonate. He described how the Nuer in South Sudan share food and other necessities freely with members of their camp, but they never share their cattle with each other. Indeed, they will literally defend their cattle with their lives.

I was thinking about the Nuer and my conversation with David when Zeke invited his friend, Zev, over for a play-date. At the time, Zeke's prized possession was his guitar. Zev wanted to play with it, and Zeke, quite reasonably, refused. I asked Zeke to share his guitar, even though I had made it clear to both Zeke and Zev that I was not willing to share the camera that I was using to film them. Indeed, I would not even let them touch the camera, fearing that they might damage it. Zeke, probably sensing my inconsistency, clung to his guitar as if his life depended on it. Zev grabbed it too, and they spun around the room. Eventually, Zeke relented. Zeke and Zev took turns playing the guitar, and they both seemed happy. It was beautiful, but I was left feeling like a hypocrite. Why should Zeke share his most special possession when I was not willing to do the same thing?

I want to be a good man, an ethical and generous person, but I also want to make sure that our family is comfortable. I want my wife Alison and our sons Zeke and Ozzie to have easy and happy lives. How do I balance those two quite different desires?

This is not an easy question, especially if Darwin's theory of multi-level selection is correct, as Alex Rosenberg and others now believe. Group selection encourages us to share and behave altruistically, so that we will be part of stronger groups; while individual selection encourages us to behave selfishly, so that we can advance within those groups. We are fundamentally conflicted on a genetic level. We have impulses to both share and to not share.

I feel this conflict in myself, and I sense it in Zeke as well. Zeke loves his tools. They're part of his identity, as a "worker man." When Ozzie started crawling and messing with his stuff, Zeke responded by hiding his tools in secret compartments to safeguard them. A big part of him clearly does not want to share his special tools. They are too intertwined with his identity. But, Zeke also loves building things with Ozzie, and he is often willing to share even his most special tools with him so they can complete their projects.

Christian Miller talked to me about how philosophy may not be able to tell us precisely how much we should share. There are too many ethical theories, and they all may be flawed in some way. At the same time, all of the models - or at least the dominant ones adopted by Western Civilization - suggest that we aren't sharing or giving enough.

The notion that we aren't sharing enough may be the root of the anger driving all of the protests in North Carolina right now. I went to one of the protests with my camera recently, and I talked to Zeke about it afterwards. It proved to be a very confusing conversation, especially because of all of our previous conversations about sharing. How am I supposed to teach Zeke to share when I also have to explain to him that we slashed unemployment and healthcare benefits precisely at a time when there are so many people who are suffering?

There were moments in our history when we had a far more expansive view of what should be shared by everyone as part of the public domain.

I was thinking about how far we've moved from that perspective, when I stumbled upon the forgotten Socialist Jewish commune of Happyville. As a Jewish guy who recently moved from the Big City to the Carolinas, I immediately felt a lot of kinship with the 50 Russian Jews who left New York to start a Socialist commune in South Carolina between 1905 and 1908. And, it seemed quite clear to me that the Happyville pioneers could teach Zeke and I a lot about sharing. While it's too late to speak to the Happyville settlers, perhaps some of what they discovered about sharing is buried in the traces of their utopian community.

Zeke and I have been exploring the 2200 acre site of Happyville, determined to uncover those mysteries. I'm not sure how much we should be sharing or if we're capable of living like the Happyville settlers, but I'm saddened that we're so distant from the forgotten utopian past that it represents. It may be absurd to try to restore Happyville, or even the dream of Happyville, but Zeke and I are trying to do so anyway. Zeke selected his most special tools, and he offered to share them with me. Now, we're busy in Happyville, working away: probing and digging, prying and tweaking.

Joel Tauber is an artist and filmmaker who is developing the video art program at Wake Forest University. His current undertaking - The Sharing Project - will be presented as both a sculptural video installation and a feature film. http://thesharingproject.net

Artist and filmmaker, "The Sharing Project"; Orchestrator of the video art program at Wake Forest University