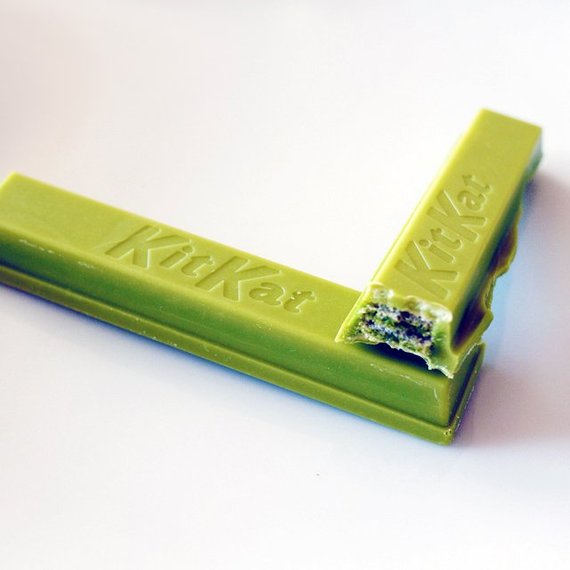 Before leaving on a recent trip to Japan, friends and family kept asking me the same question: "Will you bring me back a Green Tea Kit Kat?" They could have asked for anything -- beautiful paper, handmade ceramics, cutting-edge electronics -- but all they wanted was candy. Easy enough, I thought. Break me off a piece of that.

Head to any convenience store in Japan and you'll understand just how devoted Japanese culture is to the sugar arts. Aisles of candy overflow with sweet treats in every flavor. Chocolate is popular, but so are red bean, coconut, sweet potato, wasabi, and of course, green tea flavors. And Kit Kat is leading the way on the crazy-flavor front, with varieties like rum raisin, Shinshu apple, red pepper, and strawberry cheesecake.

As I delved deeper into the world of Japanese Kit Kats, a strange rumor kept surfacing. Locals kept telling me that there are actually two formulations of Green Tea Kit Kats -- the standard flavor that you'll find all over Japan, and a less bitter version that they sell only at Japan's airports, a difference meant to appeal to foreign taste buds.

Intrigued, I bought candy bars from both city convenience stores and the airport. And when I arrived home, I recruited everyone who had asked for Green Tea Kit Kats to test the theory. The verdict wasn't definitive—some thought the two Kit Kats tasted different, others forgot that they were part of an important task force and just answered "Yum," when asked to describe the variances.

By this time, I had run out of Kit Kats to test, and I still didn't know if Kit Kat truly had different versions of a single flavor. So I decided to go straight to the source.

Related: Made in Japan: Crazy Souvenirs from Tokyo

You know how in movies there's a pivotal scene in which the main character gets a new piece of vital information and says something like, "This is bigger than you or me." That's pretty much how I felt when I learned that the rumors are true, but incomplete. The truth, according to Nestle Japan, is that there are actually three different recipes. Mind blown.

There's the Green Tea Kit Kats you'll find in supermarkets, drug stores, and convenience stores. It's sweeter and more bitter than the version you'll find at airports. And then there's the Kit Kat gift series, available in the Kansai region of Japan, which features a Green Tea Kit Kat created in collaboration with a Japanese tea manufacturer.

Have you heard the rumor? Have you tasted the difference?

Read the original story: The Shocking Secret of the Green Tea Kit Kat by Christine Sarkis, who is a regular contributor to SmarterTravel.