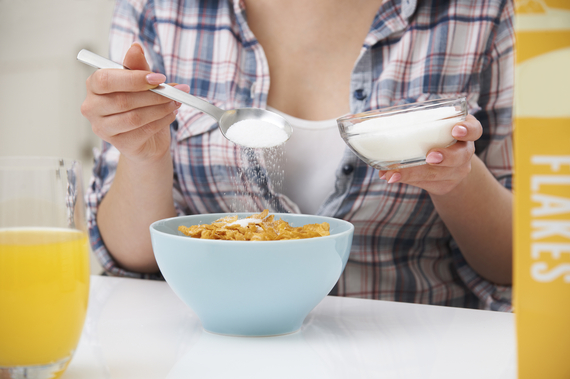 If I offered you a million dollars, could you hold your breath underwater for 15 minutes?

Unless you're an amphibian or a superhero (Fish Woman, anybody?), the answer will be "No." The brain's innate drive for oxygen would override any "willpower" to win the prize.

Unnervingly, if you're currently living on a steady diet of sugar-enhanced foods, your brain is similarly re-wired, demanding that next "hit." Your willpower has as much of a chance at resistance as the ability to keep your body underwater.

We know sugar is not a healthy substance -- but it was this stunning example by my colleague Dr. Mark Hyman about its impact on our brain that really drove home the message. You see, I'm a reformed sugar addict. During residency, a long ER shift was the cue for a few bags of Skittles. A studying session led to Swedish Fish. But I realized that these sugar hits always led to a crash -- and then a craving for even more -- which made it clear to me that it was time to make a change.

Your Brain on Sugar

Sugar acts within the brain's "Reward Center" mechanism (it's like the brain's equivalent of the elementary school Gold Star chart, or if you're like me and in a home with a toddler right now, the "Potty Chart"). Upon eating sugar, your brain releases Dopamine, our favorite "feel good" hormone, the same one that's triggered by other pleasure mechanisms like sex, exercise, and, on the bad side of the spectrum, drugs like cocaine or meth.

Through the same mechanisms as drug addiction, frequent sugar intake means that the brain eventually gets accustomed to that high and become less sensitive to sugar. So to get the same rush, your brain requires more and more sugar over time.

Here's how it works: You eat a sugary food, your blood sugar levels spike, and your body releases Dopamine (yay!) and insulin (which triggers your body to store the sugar as fat). Then comes the "crash": your sugar level plummets and you feel tired, hungry, and reach for the next sugary treat. It's purely chemistry, my dear, and these physical urges completely override your willpower and desire to eat healthfully.

So are you doomed to be a victim to brain chemistry? Hardly. Just as excess sugar rewired your brain in the first place, cutting back can reverse the dependence, just as I did. But this is harder than it sounds, largely because:

(1) It's everywhere: Added sugar is included -- sometimes as the second or third ingredient -- in over 70% of packaged foods. Think everything from breakfast cereals to BBQ sauce to salad dressings and so-called "healthy snacks" like granola bars or even those "heart approved" refined-carb breakfast cereals. The FDA just acknowledged the confusion behind these labels this week and is looking at redefining them, but until then, it's fair game for sugar-ladened snacks to boast the "healthy" designation.

(2) It's sneaky: Sugar exists in many forms, making it easy for the food industry to hide it in ingredient lists, listed with other names in foods you might not even think of as "sugary."

Look, we all know the white stuff is going to sneak in somewhere, sometime, into our own and our kids' diets. You don't need to become a biochemist to cut back, and you can still even have a sugary treat once in a while. But if you're tired of this sugary chemistry experiment going on in your brain, follow these 3 steps to at least minimize the majority of added sugar.

As tricky as this seems, sugar is almost never called just "sugar" on ingredient lists, so you have to be smart about spotting where it hides.

There are at least 61 different names for sugar on food labels. I may be a science nerd at times, but even I don't expect you to memorize them. Here are a few tricks: avoid anything ending in "-ose" like sucrose or maltrose. Look out for the buzzwords of "syrup," "nectar," "cane" and "sweetener." And be mindful that even natural sugars, like agave or honey, still contribute to your daily sugar limit. If sugar (or any of these terms) is in the top 5 ingredients, it's a treat, and not a nutritious food.

Drinking sugar-sweetened beverages? News flash -- your brain doesn't even recognize these calories as food, leading to a high and crash that will end with you eating even more. Public enemy #1 is soda -- with up to 46 grams in a single 12-oz can, one drinks can put you over the sugar limit for the entire day (24 grams per day for women and 36 for men, per the AHA). Multiple studies have suggested the link between increased soda consumption and obesity in the U.S.

But it's not just soda -- watch the "healthy juice" too: many juices and seemingly healthy drinks contain added sugar. For the most part, unless you're talking a fresh-pressed, unsweetened juice, you're better off eating a whole piece of fruit. And to settle the whole fruit-is-sugar debate, while fruit does have sugar in the form of fructose, it's nothing in comparison to added sugars and doesn't cause the same blood-spiking mechanisms. There's no need to limit fruit if you're focusing on cutting back added sugar.

You don't have to completely cut out everything sweet; I don't like my coffee black or my yogurt plain. But it's a lot easier to control the amount of sugar you're adding if you do it yourself. Add a half-packet to coffee instead of letting the barista talk you into a fancy sweetened frappe. Buy plain Greek yogurt and add berries and honey; I guarantee it will have less sugar than the fruit-flavored, sugar-laden packaged kind. As it often does, it comes down to a simple truth: it's a lot easier to know what's going on in your body if you control what you put into it.

Want to learn more about the effects of sugar and why it drives you to be hungry? Listen to my podcast interview with Dr. Mark Hyman here, and subscribe to Sharecare Radio here.

What are your tricks to cut out sugar? Or your biggest pitfalls? Tweet me @DrDarria and let me know!