My oldest is 5 years old, so that means I haven't celebrated New Year's Eve in any significant way for six, pregnant, breastfeeding, infant, toddler, kid years. But this New Year's Eve, I was lacking all of these things because the kids left for their father's at 4 PM not to return for another day. I started the evening with a long overdue shower.

I've been in a bad place for a while, maybe two months in all. Divorce mediation was in October. Most of November was trial prep, and there was a TON of exhausting, tedious prep accompanied by ginormous checks that needed writing. My attorney wheeled all 7 of the 3 inch binders to court on a small dolly and I now join the millions of American's in credit card debt. Then, there was a three-day trial in December. (Did I mention that only 5 percent of divorces make it to trial? Because that's a statistic that I'm sitting on the wrong side of). Then, I spent 6 days without my babies before Christmas and then celebrated (RE: cried, wallowed, white-knuckled through) my first Christmas as a divorcee. And finally, there will be one last day of trial in January because hell hath no fury like a financial expert who's asked to part from money.

But it was New Year's Eve. The night when we get to wash away all that dirty mess of the past and celebrate the possibilities that come with a shiny New Year. I love it. I've always loved New Years. I love that for ONCE I get to be okay with the idea of change. That it's perfectly okay and encouraged! to party into the wee hours of the morning sipping champagne and acting like a fool all in the name of letting go and embracing the possibility of a brighter tomorrow. At least for one, boozy night we can clink glasses and agree that change is good! even if we all go back to clinging to our pasts and the familiar routines the very next day. It's liberating and I love it so.

So while I was taking this shower, I thought about these things. Then, I thought about the last time I celebrated New Year's Eve in a significant way. It was 2008. We were in Costa Rica. We were supposed to attend a party on the rooftop of our small hotel but the utilities system of this Costa Rican beach town was taxed too heavy for the second night in a row, and because there was no electricity, there was no party. My husband and I sat on a darkened rooftop, alone, overlooking a darkened town and listened to the revelers in far off places. We watched the fireworks and all we had to eat was one apple. I thought about that trip. One of our many trips to tropical places. I thought about the night before New Year's when we had dinner in town, and when the lights went out, we went to the beach and stood by strangers at a bon fire. Drunk, I ran into the ocean with a skirt on holding it up above the waves. I still swear a crab bit my toe in the dark. I thought about what a good time we had together.

Until that moment I hadn't allowed myself to think about anything good we had. I've had so many feelings toward my ex in the past few years, and love was way far down on the list, but standing in this warm shower on New Year's Eve I allowed myself to feel this emotion. Before I even knew what I'd done I looked up and I said out loud, "Holy shit. I used to love him," as if this idea was the most foreign thought I'd ever come up with in my whole life. The very next moment I felt my entire body exhale. It was as if every cell let go of whatever it was holding onto and whooshed down the drain. It was visceral, and real and I'd never felt anything like it in my life.

After my body released, I nearly fell over right there from that tidal wave of grief. It came at me from every direction, all at once. I put my hand against the wall to steady myself from the sudden piercing pain I felt of allowing myself to feel my broken heart. I cried for two days, and went unshowered for two days, afraid of the ghost which found me in there. 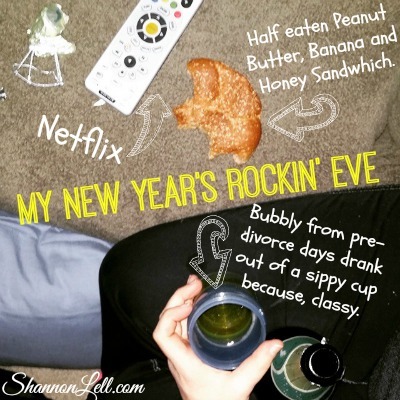 I didn't go out on New Year's. After that shower, I stayed in. I ate a peanut butter, banana and honey sandwich at midnight with a bottle of bubbly I found in the downstairs closet left over from the days when we were together. I watched Netflix. I let off a white Chinese lantern I'd saved from the Fourth of July. And I did it alone. It was painful, and beautiful and cathartic and it made me ache all over. I had finally let the sadness in, and it cleansed and suffocated me all at the same time. Because I did love him.

What came as more of a shock, was after this moment, I started to believe not only that I could forgive him, but that I already had forgiven him. Along with the gut-twisting, rush of sadness, there came a deep vessel overflowing with forgiveness.

Forgiveness for him being a flawed, imperfect man, because that's all he is -- that's all we all are. Forgiveness for all the wrong he'd done and all the apologies he never gave, and never would. Forgiveness for all the anger and accusations he tossed so lightly in my direction over the course of a year. Forgiveness for his lack of respect, for not loving me or not being capable of vulnerability or handling mine with care. I even felt like I'd forgiven his parents for abandoning me in this city where I moved to be near them, where they were my only family for eight years. I felt I'd forgiven them for saying and writing horrible things about me to the professionals thinking they are defending their son without a thought toward what they were doing to their grandchildren's mother. Forgiven all of them for not ever seeing me, really seeing me after all these years.

All of this happened because I allowed myself to let go of the anger and feel the sadness that comes when we hone in on the Painful Truth with a capital P and T. And the Painful Truth of this matter is... I loved him, and he broke my heart and it is the saddest story of my life.

And even though much of what he's done is not okay, and never will be okay... I'm going to be okay. The past is gone, today is a brand new shiny day and even if it's not great... it's still going to be okay.

((Raises martini glass)) To possibilities. If only for a little while, I will embrace change like an old, kind lover; letting go of the past, appreciating what I have right in front of me and looking forward to a bright, bright tomorrow. Cheers.