How a diverse group of Chicagoans took down the bully, braggart racist, and what it means for our movement

The people of Chicago are reviving an old tradition. Young people here, particularly blacks and Latinos, have re-learned a lesson about how real change is made and they are teaching the rest of us:

We have power in the streets that we don't possess in the electoral arena. And using this approach, on last Friday night in the course of a few hours, several thousand Chicagoans did more to stop Trump bigotry than months of media blather and politicians' handwringing. 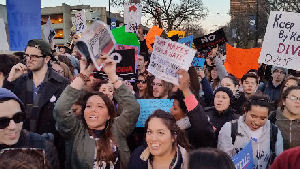 The protesters' boldness has roots in recent struggles against our infamously vicious, pro-1% mayor. Shutting down half of the city's mental health clinics, attacking teachers and public education while diverting funds to charter schools, giving millions of tax dollars to wealthy real estate developers while illegally harassing the homeless and starving public services, particularly the schools, of funding.

But it was the cover-up of a police dashcam video showing a cop murdering 18-year-old Laquan McDonald, while several others casually looked on, that caused the protests to reach a qualitatively higher level. Gone was any fealty to Chicago's notorious anti-protester laws, bad to begin with, but made much worse in the run-up to the 2012 NATO conference in the city. Other cities with similar laws, please take note.

For weeks, Chicagoans poured into the streets -- sans permits -- blocking the city's busiest streets during rush hour and shutting down Michigan Avenue's posh boutiques and high-end stores on the most profitable shopping days of the holiday season.

The militancy rid the city of a hated police superintendent; it gave the sitting mayor unprecedented low approval ratings; and it has forced the county's supinely pro-cop state's attorney into a fight for her political life.

So it is no accident that it was in Chicago that Donald Trump first got his just desserts. After taking on an authoritarian Democratic Party machine in Chicago, why not take on arch-bully and Republican thug, Donald Trump? And that's just what happened on Friday!

Chicago's response last Friday to Trump was not simply fresh and exciting. It also charts a far more effective path to getting real change than the quadrennial "choice" of picking the least worst next president.

Since Trump declared his candidacy, the media has provided tons of free publicity to his anti-immigrant, sexist, ablist and Islamophobic hate. And politicians in both parties have no principled response to his out-front bigotry -- their policies and statements often mimic his own, just without the bombast and ranting. 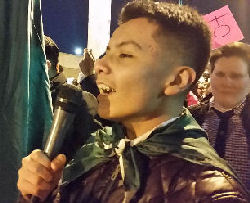 mocking title, "Deporter-in-Chief," by millions of angry Latino voters who supported him in 2008 and 2012. Or consider the baldly Islamophobic statements Hillary Clinton and her Republican opponents have routinely made over the past few months. Or consider Bernie Sanders' long and torturous equivocations when pointedly asked whether he thought Trump was a racist.

But the "street heat" made on Friday shouldn't stop with Chicago. It needs to be replicated elsewhere. If it is, it could herald the beginning of the end of Trump's presidential campaign.

Bullies lose face and their support melts away when they are successfully confronted by their victims. 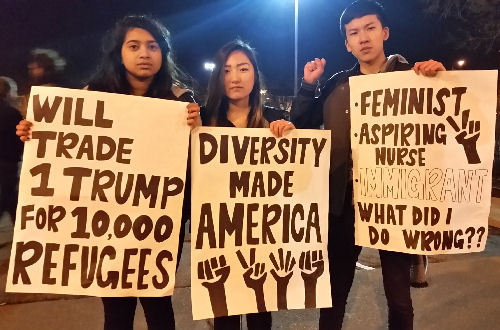 Many thanks to the Gay Liberation Network's Roger Fraser for his contributions to this article. Andy and Roger can be reached at LGBTliberation@aol.com