I once read an article about a wife who struggled as she watched her husband recover from a brain injury. It was a fantastic article where she imagined people being able to wear these beautiful signs around their neck explaining events that had happened in their lives or feelings they were having. Signs that explained what you could not tell about them by looking.

I walk with the understanding, walk with the belief that everyone has baggage, everyone has secrets, everyone has pain, everyone has been hurt. That doesn't mean that we have to walk around catching the tears of other people but smiling, being kind, not judging. Judgment as our primary reaction does not make anyone feel better. However, a smile, a kind word, a kind gesture, those make everyone have a better day.

I went shopping today. I was at Michael's looking for a few last-minute Halloween decorations. I walked past a mom with four boys who I guessed were under the age of 6. One in the cart, three walking, two of which had harnesses on so they could not run from mom. I'll admit I thought to myself, Now why is that necessary? Half a second later one of the boys was pulling against mom, in the opposite direction and then ended up falling onto the floor. It was certainly not a major tantrum -- I've seen my fair share of those as a teacher and a parent. He was simply letting her know, "I don't want to go that way." As a parent and teacher, I also knew that had he not had that harness, he would have been gone. As she told him calmly, "get up", several times and he remained on the floor, I turned to see a young man secretly filming what was happening. Filming. Filming a mom's struggle. Filming something I am sure he would later share on social media with a hastag of #badparenting or #dealwithyourkid. Well, Buddy, next time, I will have her wear a sign around her neck that tells you what I found out in my five minutes with her. Here is what it would say:

Have we really become so insensitive as a society that we should begin wearing those signs? What made that young man feel like her pain and her patience in the midst of his disobedience was a LACK of parenting? Such bad parenting that it was worth intruding on her life by filming her children without her consent?

As we talked, I really do not know if she was taking in what I was saying. The first things she said was, "I've tried everything. He is not going to listen." So, I asked if she had heard about Forced Choice. She had not, so I told her about getting your children to listen by empowering them with choices. She listened, she allowed me to talk to her children, and she just stood there. I felt as though she was in shock. Her boys were some of the most incredibly sweet boys. They answered my questions and told me what they were looking for that day and what they were going to make. One of the twins told me who his teacher was and the 6-year-old told me that he hates cleaning his room and I said, "Me too. I'm 31 and I still don't like doing it."

Validate children. Validate their feelings. Don't tell them lies to force them into submission, like, "Well I love cleaning my room and so should you." I don't want to lie like that. To anyone, let alone my kids. When they tell you they don't like carrots, acknowledge their feelings don't just force them to eat it. Tell them, "I'm so sorry you feel that way, but it is what mommy made for dinner tonight so you need to eat at least 3." If it continues, "I know you don't like them bud, but sometimes, we have to eat things because they're good for us. If you don't eat them during dinner, you will have them tonight for snack while your sister has cookies and milk." It may not work the first time or the second or third, but if you keep persistent with it, with following through, with allowing them to make the choice, you will see change. I have a 4-year-old, so I can attest to this. He had to have chicken and sweet potatoes and pork chops for snack quite a few nights. Now? Now, I just give him the choice of eating it during dinner or eating it for snack and because he knows I'm going to follow through, he chooses now. HE chooses. I don't. I don't force him into submission. You want to raise a child who knows how to make their own choices. Not children who get bullied or punished into doing what has been requested. You want your children to be able to say "no" as they enter into peer pressure and not be so used to succumbing to pressure that they give in without much thought.

Parenting is an unbelievably hard job. There are so many days that make you want to call your mom or dad and ask them "how in the world did you make it through this?" Then, just a few minutes later, one of your children does something wonderful or hilarious and you think to yourself, Ah, this is how. Now, don't get me wrong; parents make bad choices. Parents struggle. But when they come across your path, try to see the sign around their neck. Consider that they are more than that very moment, they are imperfect just like you and me and although they have been to that store without a scene 34 times, on the 35 time, they weren't so lucky. Your compassion in that moment will make all the difference in the world. Be someone's joy for the day. Love each other well. 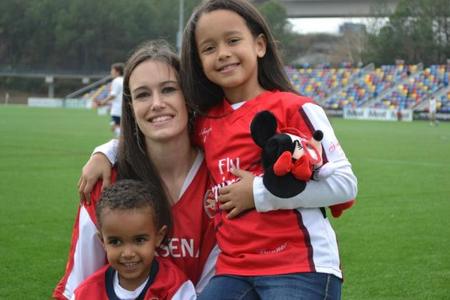