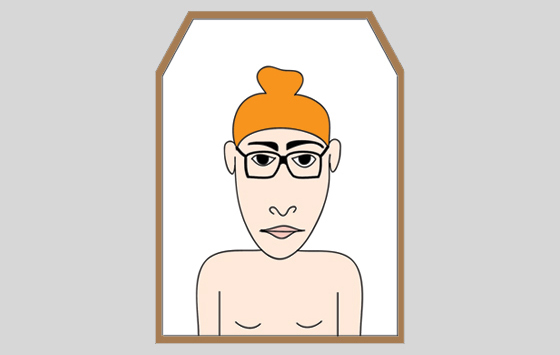 There is so much more to our lives than a single demographic label or a medical diagnosis or any other identity the world imposes on us.

Dr. Oliver Sacks was a kindred soul who opened a chest box full of stories hidden behind medical labels. He revealed secrets, made so called abnormalities appear with a life of their own. He humanized the vast potential of those stereotyped by their diagnosis.

In honor of his life I share a few of my secrets and a load of quirks in our visual perceptions.

I was born in a woman's hospital in Washington DC to a Woody Allen look alike in a turban and beard married to my mother ten years his junior. My birth certificate identifies me as the third child with the race column marked as Caucasian.

In my early childhood photos I look like a healthy kid with a cute smile on my face. All that appears to have changed somewhere around 1st grade. Photos past that point are without a smile.

One day while at school in first grade a teacher discovered my inability to read her chalked up words on the blackboard. On came the thick plastic framed glasses and the family treated it as a tragedy. Besides the medical challenges my future marriage prospects were on the line.

Thanks to puberty I grew up in inches, chest hair remained elusive but the hair on my head was almost down to my waist thanks to my parents religious tradition prescribing no hair cuts. One unwelcome change was the elongation of the face. Combine that with thick glasses, front teeth protruding forward due to years of thumb sucking and the entire world around me constantly reminding me how handsome my older brother was. It was true he was way more pleasing to the eyes. We both knew this. But for many this observation had to be vocalized at every social opportunity. I slowly learnt to look away from myself in the mirror thinking I could hide from my own image.

One thing I could not hide from was a hormonal mishap leading to small, tender growths right under my nipples. I never got a believable medical reason for this confusion but was glad to be under the skillful knife of a surgeon who took these growths out for good. On being taken out of surgery on a gurney some of the nurses confused me for a woman with my long hair spilled all over and near lack of any body hair.

On November 1st in 1984 my family was in a self-imposed curfew in our apartment in the Indian capital city of Delhi, following the assassination of Prime Minister Indira Gandhi by her two Sikh bodyguards with turbans and beards. Late morning through cracks in the curtain we saw policemen guiding a long endless mob of men armed with metal and wooden poles. Hours later we saw men returning in the opposite direction hands full of looted bounty. In the middle of it all my friends belonging to the Hindu ethnic majority were playing a game of cricket. The bizarre scene gave my father the comfort to venture out into the balcony in open view.

An empty handed man fiddling with his flip flops spotted us in our buns. It was enough for him to identify us as Sikhs. He cursed on our mother and magically a mob surrounded our apartment building. Amid the chaos my friends halted their game of cricket with the amazing presence of mind to talk the mob out of attacking us since we resided in a government owned building. The government sanctioning the carnage would not take it well at its property being the target.

When the dust settled after three days, thousands of Sikh men hunted down by their buns, beards and turbans were burnt alive on the streets of India.

The only response I could find to the carnage was to try my best to excel at school, leave home for college, far away from this madness. Colorful, smooth, fragrance filled catalogs from Carnegie Mellon, UCLA, MIT fed my day dreams. 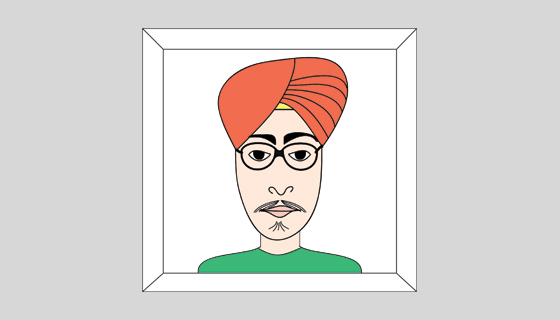 On a September morning in 1989 I arrived in Los Angeles. I was mesmerized by the wide highways, humongous grocery stores, no one walking on the streets and blondes. College was a year away so I filled out minimum wage job applications at Taco Bell, McDonalds, Burger King, 7-11. They all said we will call you but no one did.

I found the answer on the streets, any place I walked past fellow Americans. Some laughed in hush voices, others loudly, some called me names. 'Genie', 'clown', 'raghead' and others I have forgotten.

I left California for the flat lands of the Midwest to start college at Ohio Sate University. College was a nice break from street life. One of my roommates, a native Ohioan inspired by my trial and tribulations along with then popular beer ad slogan, 'Why ask why try bud dry' came up with my candidacy for floor president in the honors dorm. He whipped up a flier with a turban sketch and the slogan, 'Why ask why try the turban guy'. We put up fliers all over the floor.

I won the election.

I did not bask for too long in my electoral triumph. I transferred to UC Santa Barbara in sophomore year. I had reached the threshold for standing out. I wanted to be invisible, to live but not be noticed.

I took a trip to the barber with my long hair tied in a pony tail. With a single clip of the scissor I bid farewell to my twenty year old unshorn hair. For a while the trick worked. Just about all the eyes were off me.

It was not take long before strangers started coming up to me to start speaking in Spanish. I responded with a "Me no Espaniol." Some were disappointed in me not embracing my native tongue. One man swore he had seen me in Peru.

One of the biggest side effect of college life was falling in love with books for pleasure. I grew up in a house where only two books sat on its shelves, Lady Chatterley's Lover and Cheiro's Book of Palmistry. Somehow I missed the pleasure connection.

Now in college I fell in love with words of Asimov, Freud, Plato, Nietzsche, Abott, Sacks, Huxley and Buddhism. While at UC Berkeley for graduate school I engaged in Taoist meditation sessions along with listening to Sikh hymns playing 24 hours in the background while I stayed with my deeply religious brother.

Eventually I got addicted to this spiritual candy and fell in love with the Sikh way of life. I decided to grow back my hair, a long two-year process with me ending up with a big bun on top of my head ready to serve as anchor for the 7 feet long turban. I donned one for the first time in 10 years in August 2001. A month later the 9/11 attacks happened while I was working only 15 miles north of the city.

I worked from home for the next two weeks without stepping out of home. Once I stepped out all eyes were on me, middle fingers held high as salutations by fellow riders on highways. Shouts of 'Osama' and 'Taliban' were most common greetings from strangers.

I did not know how to respond until I spotted a cartoon weeks later by Mark Fiore titled 'Find the Terrorist.' This cartoonist had captured my predicament perfectly.

So I started creating turbanful cartoons. The more 'Osama', 'Taliban', 'Terrorist' cat calls I got, the more cartoon characters with turbans and beards I spitted out from my computer. The calls never ceased. Over time they have become synchronous with news coverage.

On my first trip to the New York City Comic Con in 2011 as an exhibitor, I sought a little comical assistance from a quintessential superhero. I created a poster with a turbaned and bearded Captain America ready to kick some intolerant ass.

A photographer trying to capture me as part of a photo-essay came over and in passing mentioned perhaps I should come back next year dressed as Captain America.

Never in a million years would I dream such a thought. How could I don this uniform in my turbaned, skinny, bespectacled presence. After the massacre of Sikh worshippers at the hands of a White supremacist in Milwaukee almost a year later followed by a repeat request from the same photographer I agreed reluctantly to don the uniform.

On a sunny day in June 2013 I stepped out into the streets of New York City as Captain America for a collective mind freak. From the Met to Central Park to subway ride to the high line I stepped into a parallel universe with strangers flocking to hug me, cops taking photos of me, an FDNY truck at my disposal, getting pulled into wedding parties. That first outing led to many more in New York, Los Angeles, Kansas and Mississippi. I have heard from strangers, acting service members, veterans, teachers literally espousing their love for me. 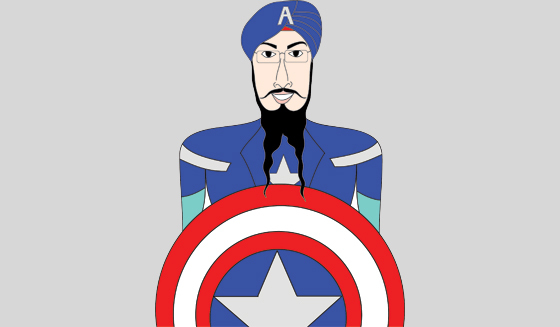 Besides the countless admirers only two young men called me a 'Terrorist' while in uniform. When I questioned were they really calling Captain America a terrorist, they apologized profusely.

So yes I am really Sikh, American at heart, technically Caucasian, brown complexioned, perhaps unsightly, donning occasionally as Captain America with the latent power to bust your mis-perceptions.