"Oh God, the heathen have come into your inheritance; they have profaned your holy temple." Psalm 79:1

"I helped create this," stated Reverend Ed King as we ate lunch at the Mayflower Cafe in Jackson, Mississippi. We were talking about what it was like to walk downtown the main street in Jackson, Mississippi t that leads up to the State Capitol. This street flanked on all sides by what used to be very powerful white mainline Protestant Christian churches -- First Presbyterian, First Baptist, Galloway United Methodist...

"Do you feel something? Do memories flood back?" I asked. Fifty years before this street was filled -- marches, sit-ins, police violence, torture... now silent and mostly deserted. As soon as white power structure was given a huge blow by the hard work and sacrifice of many... the main streets of Jackson were deserted. 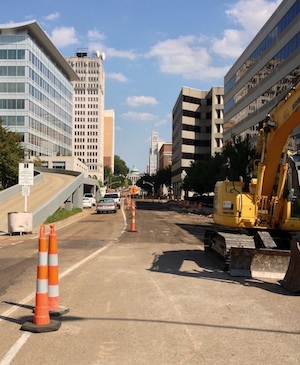 View of the Mississippi State Capital down North Congress Street in Jackson, 9/17/2013

As we ate our lunch that hot afternoon, construction crews were rehabilitating the road, trying to implement another attempt at revitalization. The Mayflower Cafe is one of only a handful of business actually open.

Reverend Ed King has been in Jackson, Mississippi since 1963 when he came to serve as a chaplain at Tougaloo College. He was the first white minister to take this position in an all black college. This minister of the Civil Rights Movement was instrumental in organizing a church protest campaign in which black and white students would attempt to enter the white powerful churches mentioned at the beginning of this post -- "to confront Christians where they are vulnerable -- their faith" to paraphrase Reverend King.

If the call of the church is to bring all humans to Christ, how can any church justify turning people away who have come to worship in peace?

United Methodists, Presbyterians, Baptists... Protestant Christians called the police... students were handcuffed and jailed when they attempted to kneel down to pray outside of the doors that shut them out of Christian fellowship.

Yes. This was a thing... and it was a thing less than fifty years ago. But now Jackson streets are quiet. "I helped create this," Reverend King says.

So what has been created? What do we make of the silent streets?

Well, on the one, hand my daughter and I can sit together without incident in downtown Jackson. Her brown skin against my white skin is not grounds for refusing us service -- or worse -- any longer. On the other hand, the cry of civil rights struggle is drowned out by the comforting seductions of a wishful post-racial mindset.

For the over the past decade my church, the United Methodist Church (UMC), has advertised
"Open Hearts. Open Minds. Open Doors."
Yet, if we are to purify the profaned temple -- the temple filled with those that not less than 50 years ago would choose to arrest rather than welcome people of color into its doors, we will need more than a nice slogan. As we stand now... 50 years later the UMC remains
93% white
, churches remain segregated and actual diversity (i.e. people of color and whites, not only worshiping, but leading churches together) elusive.

Oh God, the heathen have come into your inheritance; they have profaned your holy temple.

Like Reverend King the struggles and shouts for justice will need to well up in us on a regular basis. We need to teach ourselves and our children about the sacrifices, the lives lost... We need to repent of taking too much solace in the silence streets.

Ph.D. Candidate in Religious Studies at the University of Virginia