What could possibly be the silver lining of the presidential bid of a candidate whose comments and actions are degrading, undemocratic, bigoted and just plain cruel?

How could there be an upside to a campaign that makes one wonder whether it's safe for children to watch the evening news or even presidential debates?

Frankly, Donald Trump's candidacy is so offensive, so frightening and so unprecedented in the United States that it compels us to a much-needed collective focus on decency and civic engagement -- a renewal of civitas.

In my lifetime, I have seen plenty of elections in which the candidates attacked each other. But I have never seen a candidate for president undermine the bedrock principles of our constitutional democracy.

Donald Trump has incited his supporters to use violence against peaceful protesters. He has called for a ban on members of an entire religion from entering the United States. He has disparaged African-Americans, Mexicans and the disabled. He has said he would jail his political opponent and led his supporters in chants of "Lock her up."

When his campaign has faltered, he has raised the unfounded specter that the election could be rigged against him.

This election is not just about politics and policies, but about human decency.

Trump has denigrated women, boasted about repeatedly sexually assaulting women, and hurled vicious verbal attacks against women who report they were assaulted by him. First lady Michelle Obama spoke for many Americans when she gave a speech last week reminding voters that this election is not just about politics and policies, but about human decency.

If the election were held today, polls suggest Hillary Clinton would prevail. But regardless of the outcome, our country has a Nov. 9 problem. Trump has tapped into a populist anger that animates America and has used it to stoke hatred and divide the country. He has seized on the economic challenges confronting Americans, and instead of bringing the country together around solutions, he is sowing division.

America is changing demographically and economically. Deindustrialization, globalization, the technological revolution and the diminishment of the labor movement have left Americans feeling powerless. The loss of good jobs and good pensions, wage stagnation, and escalating child care and college costs have left people angry and anxious, and they are desperately looking for someone who can bring change. Trump says he is their champion, but his plans would be devastating for the very people he claims he will help.

People need to know the facts. The chief economist of Moody's Analytics, who has advised prominent Republicans, concluded that Trump's economic proposals would cost 3.5 million Americans their jobs and lead to a long recession. (The same economist estimated that Hillary Clinton's economic plan would create 10.4 million well-paying jobs.) Trump's proposals regarding taxes, child care and the economy advantage the wealthy over low- and middle-income Americans. And he would decimate America's public schools by voucherizing them.

The toxic rhetoric of the Trump campaign has filtered down to affect many children and schools. A middle school teacher in Dearborn, Mich., reports that Muslim students have stopped wearing anything that could identify them by their faith. A children's therapist in New Mexico says her daughters came home from school asking if it's ok for boys to grab them or try to kiss them, because boys at school are saying "Donald Trump does it." A survey conducted by the Southern Poverty Law Center found steep increases in anti-Muslim or anti-immigrant comments, and an alarming level of fear and anxiety among children of color--what many have called the "Trump Effect."

Once the election is over, we will need a collective effort to bind the wounds and address the divisions caused by this polarizing campaign. This will require a national effort, and our public schools can play a central role. Public education has been a bulwark for democracy, respect and diversity -- what the American Federation of Teachers calls "democracy in education, education for democracy." Our educators and students will be the first responders in this fight for our democracy, and we will need to give them the time and latitude to fulfill their vital civic function.

Children of all different races, religions, cultures and economic means attend public schools. Young people understand that words and actions have consequences, and that bigotry and bullying are unacceptable. Their teachers are well-schooled in helping students discern fact from fiction, demagoguery from democracy, and they are experienced in creating pathways toward aspiration and away from hate. We need to send young people into adulthood knowing their rights, responsibilities and power as citizens to be the drum majors of democracy. And that, indeed, would be our civitas moment. 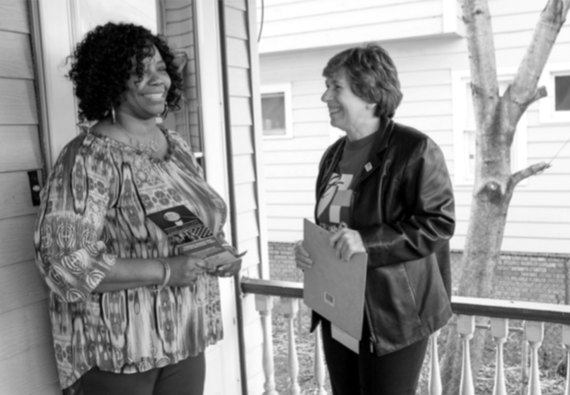 Randi Weingarten speaks to a voter while canvassing in Cleveland, Ohio