The single greatest mistake investors make is to extrapolate recent history out into the future. They take the financial returns of the past five days or five years or even 50 years and assume the next few days or years will look just the same without any consideration for the historical context or conditions that provided for those returns.

They forget that, while "history may rhyme, it doesn't repeat itself" (Twain). Or that, "the only thing that is constant is change" (Heraclitus). These two famous quotes apply to the financial markets as much as anything.

Ignoring these truths and instead simply extrapolating is why investors are suckered into pouring money into the stock market only after a run of great performance. They believe that the recent gains are about to repeat to their great benefit when they should be thinking about what conditions allowed for those gains to take place and analyzing whether they are still relevant or not.

This is also why they are suckered into selling only after a painful decline as they did at the lows made during the financial crisis. They believe that they are about to suffer another 50 percent decline on top of the one they just endured when they should really be reminding themselves that change is the only guarantee in life.

I believe this is one of the biggest problems with so-called "passive" investing. It is built upon the faulty premise that it is "impossible to forecast" the future returns of any asset class over any period of time so we should just own all of them all the time. My response to this is that while "ignorance may be bliss," it's not a valid investment strategy.

In his 1992 letter to Berkshire Hathaway shareholders, Warren Buffett wrote:

We've long felt that the only value of stock forecasters is to make fortune tellers look good. Even now, Charlie and I continue to believe that short-term market forecasts are poison and should be kept locked up in a safe place, away from children and also from grown-ups who behave in the market like children. However, it is clear that stocks cannot forever overperform their underlying businesses, as they have so dramatically done for some time, and that fact makes us quite confident of our forecast that the rewards from investing in stocks over the next decade will be significantly smaller than they were in the last.

Much can be learned from this short passage. First, short-term stock market forecasts are, indeed, nearly worthless -- essentially a guessing game. Second, long-term forecasts, on the other hand, can be made with "confidence." "How?" you ask.

It's actually very simple. Rather than fixate on recent history and extrapolate it into the future, you must abandon this natural tendency. And as I said earlier you also need to analyze the conditions that allowed for those returns to see whether they are still relevant to today's market.

In Buffett's example, he's referring to the wonderful returns equity investors experienced from 1982-1992. During that span investors roughly quadrupled their money. Over the coming decade they merely doubled their money so Buffett was right that the decade beginning in 1993 would fall far short of the return of the prior decade even it they were still very good.

But Buffett made another prescient forecast in November 1999 when he wrote:

Today, staring fixedly back at the road they just traveled, most investors have rosy expectations. A Paine Webber and Gallup Organization survey released in July shows that the least experienced investors-those who have invested for less than five years-expect annual returns over the next ten years of 22.6 percent. Even those who have invested for more than 20 years are expecting 12.9 percent. Now, I'd like to argue that we can't come even remotely close to that 12.9 percent... you need to remember that future returns are always affected by current valuations and give some thought to what you're getting for your money in the stock market right now.

You probably already know that stock market returns from 1999 to 2009 were not very kind to investors.

And Buffett tells us how he was so confident that this would be the case. He examined the conditions that allowed for returns to be so wonderful from 1982-1999 but were no longer present in 1999: wonderful valuations. Stocks were so cheap in 1982 that the coming decade was virtually guaranteed to be better than the decade that preceded it. (1972-1982 was another decade that was not fun for investors.) Then in 1999 valuations were so expensive that there was almost no possibility of decent returns going forward.

So let's take a look at Buffett's favorite valuation yardstick which he refers to on both of those prior writings. It tracks the total value of the stock market in relation to Gross National Product. 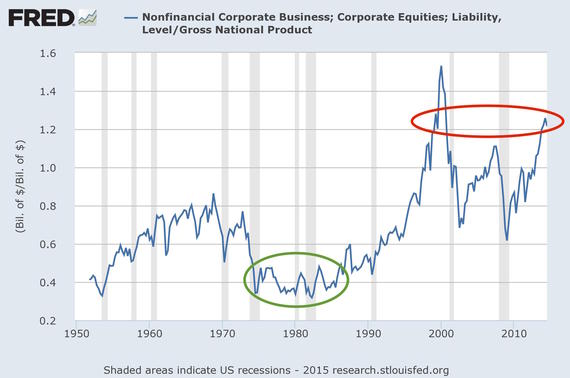 From the chart, it's plain to see that valuations were extremely attractive back in the early 1980's. This is why stocks performed so well over the next 20 years. However, I find it absolutely fascinating that stock market valuations today are essentially equivalent to valuations in November 1999 when he wrote that latter passage. Yeah, go back and read that last line again. It's a doozy and it's absolutely fact.

This is also why the past five years or even the past 50 years are totally irrelevant to equity investors in today's market. There is almost zero possibility today of achieving a return anywhere close to what those historical returns represent. So shun forecasts if you want. Plead ignorance if it makes you feel blissful. But at today's valuations you should at least be aware of the fact that it's exceedingly dangerous to fall into the trap of extrapolating without analyzing.