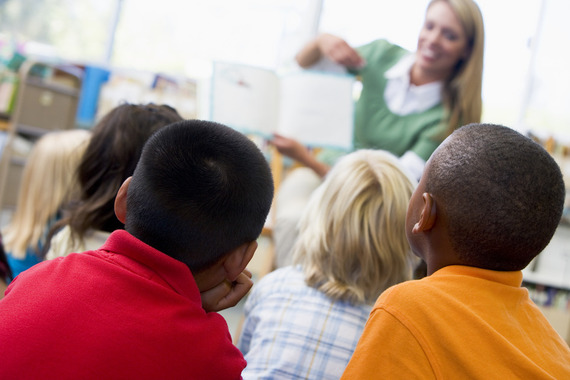 The conventional wisdom is we significantly underpay our teachers in the US. Unfortunately, this makes teaching one of the least sexy professions in our society even though it is one of the more important. One study out of Harvard University estimated that one talented kindergarten teacher could be worth as much as $320,000 when you factor in the actual value that such a teacher is producing for our society. That makes sense when you think about twenty-five students walking out of her class having learned the basics and ready for first grade each year. But spread out that example across the country's 15,000 school districts and you have a labor market that is stretched quite thin in many ways.

Myths and variations all around

Some states such as Arizona and
Hawaii are desperate for teachers
. Next year, Hawaii anticipates having over 1600 teacher vacancies and they have begun offering cash incentives for teachers whom they recruit to teach in paradise. That demonstrates one of the core problems with the teaching profession when it comes to compensation: there are so many levels of government involved in setting education policy that it makes it difficult to set a national standard for teachers with regard to pay. And we know that working conditions (and the nature of the work) tend to determine how much someone makes on the job. There is also great variation in teacher quality and a growing debate on how teachers should (or should not) be rewarded for their performance (more on this below).

In the meantime, there are some pervasive myths out there about teacher compensation that seem to go away upon closer inspection. Teachers are making an average national salary of $30,377 according to the National Association of Colleges and Employers (NACE). Other college graduates who enter fields that require similar training and responsibilities start somewhat higher such as software developers ($43,635), public accountants ($44,668), and registered nurses ($45,570). In addition to this low average starting salary, the Economic Policy Institute (EPI) reports that teachers' wages have fallen behind those of other similar workers since 1979 when looking at weekly and yearly earnings.

Cost of living is huge for teachers
. Districts are competing across municipal boundaries to recruit the best teachers, and they are using pay and benefits to do so. One frequently occurring dynamic is teachers starting off in lower-paying urban districts, gaining the requisite experience and training there, then moving on to higher-paying suburban districts with other better-working conditions (newer school buildings, external financial support from parents of means, etc.). Many teachers have demonstrated clearly that they will do what is best for their families while also serving students--a very rational choice.

Measuring and paying for good teaching

Meanwhile, this particular workforce model also creates a layer of management that encourages the best teachers to move out of the classroom and into administrative roles with considerably higher salaries and benefits, yet another interesting aspect of our education system. Though we have seen some changes in educator compensation through efforts such as "merit pay," results for students and teachers themselves have been very limited regarding their overall impact. Research from RAND in New York City showed that merit pay did not increase student achievement at any grade level and that teachers did not change their teaching behaviors even with the offer of such pay incentives.

Despite evidence that suggests merit pay does not improve teaching and learning in schools, the federal government has invested millions in supporting merit pay initiatives all around the country through the Race to the Top program under the Obama administration. The president's former Education Secretary, Arne Duncan, said performance pay for teachers was one of his "highest priorities." Some examples of performance pay efforts around the country are:
Advertisement

As a country, we still treat teachers like an industrial labor force in the way that we negotiate their contracts (down to the number of working hours per day and even the length of their daily lunch breaks!). It is an antiquated but still functional model. Because of this, teaching is one of a few professions left that
still benefit from robust pensions
. In most other fields, this is a rather significant and unusual job perk. Health benefits are also on the table in these negotiations and teachers are keen to take jobs in districts with generous benefits packages for their families.

The U.S. Department of Education has pushed districts to rethink the total compensation package that teachers receive. The feds have asked districts to consider compensation in the form of prepaid insurance premiums, rather than employee welfare entitlements; and encouraged districts to offer pensions as deferred compensation in the form of managed savings plans which have large monetary value especially late in a teacher's career. The Department of Education says that these are "powerful incentives that should be used to reward and motivate the most effective teachers in a manner that does not promote one-size fits all approach."

The issue of tenure

Tenure continues to be a sticky issue for teacher compensation. There have been recent and rather effective attempts to limit tenure for teachers as a way to reduce the burden of teacher compensation on districts (payroll often accounts for 70-80% of a district's total budget). Districts are beginning to tweak benefits packages and pensions at different years of tenure, as part of a bigger effort to revamp compensation programs. The goal is to strike a balance between employee and employer benefit contributions as a way to incentivize productivity throughout the career cycle of the typical teacher. While it is hard to quantify the impact of tenure when it comes to compensation, the mere security that tenure provides ends up being a very real financial incentive for many in the education field.

Still yet other districts are working to tie teacher compensation to
Advertisement
measures of performance such as professional development
, service to the district, as well as further certification and professional credentials. That is the case in Portland, ME where the Professional Learning Based Salary System (PBLSS) was implemented in 2007 among their 740 members. The system creates a set of five salary lanes in which teachers earn "salary contact hours" based on various professional development activities. Teachers can move across these lanes based on their professional education to increase their salary in a given year.

Just a few years before, in 2004, the teacher's union in Helena, MT adopted the Professional Compensation Alternative Plan (PCAC). This plan is based on the teachers' progression along a self-designed career development plan, professional service activities agreed upon with school administrators, and receipt of a positive evaluation (includes professional growth goals and "check-out" professional learning tasks previously agreed upon) written by an administrator.

The future of teacher pay

While there have not been extensive evaluations conducted of these performance pay programs tied to professional development, such approaches seem more amenable to teachers and their unions at this current moment. It should be noted that there is little precedent for performance-based pay internationally, especially when we look at countries with high-performing education systems. The United States is somewhat unique in its efforts to combine business thinking with government-run education.

In conclusion, the broader conversation about teacher pay focuses on the central question, "How do we value (through compensation) a role that is centrally important in our society?" Given the nature of teaching, it is a difficult thing to measure in dollars, but also important that we do just this so that teachers can enjoy a strong standard of living while teaching students. With that said, we should expect the competition and wide variation that we see in teacher pay to continue for a while given the various structures set up to determine how we pay our teachers for their work with our young people.