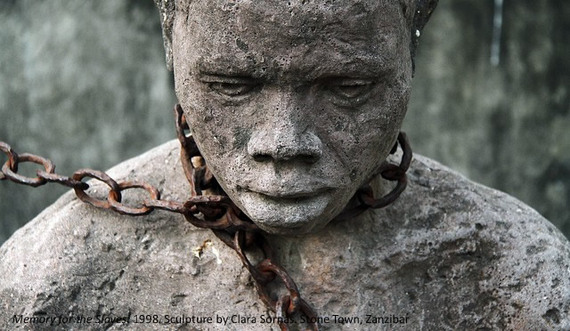 It's April, and we've already survived New Year's, President's, and Valentine's Days, Black and Women's History Months, Good Friday, and Easter Sunday. While I detest the commercial exploitation of holidays, and question the origins of many, I do appreciate the fact that these days and commemorative months remind us to pay attention...to love, heritage, giving, gratitude, and Jesus (even if December 25th isn't his real birthday).

Take Black History Month, for instance. One month is certainly insufficient to observe this multi-layered reality, but two months later and something of it has stayed with me. Black History Month 2016 swept me past my generation and my personal memories, past Obama, MLK, Rosa Parks and the great achievements of the 20th & 21st centuries and straight back to the dawn of the African American experience: Slavery. The idea of it has remained on my mind, owed largely to the harlem is...DOWNTOWN exhibit, which I worked tirelessly to open for weeks leading into February. And, owed in part to Hollywood-fueled dialogue, including #OscarsSoWhite amid a curious bump in slavery-themed dramas in recent years -- most currently, Nate Parker's runaway Sundance hit, Birth of A Nation -- which continue to push the conversation further, and remind us that there are tragic, triumphant, and unfathomable stories begging to be told, still. 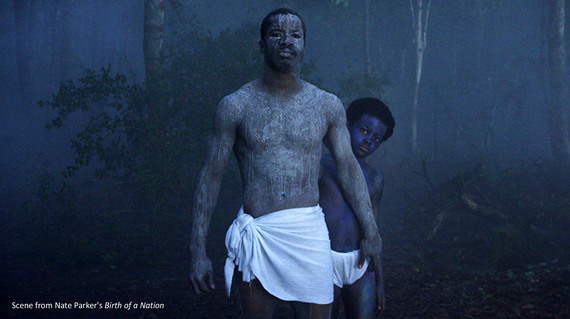 harlem is...DOWNTOWN, which remains open at Federal Hall National Memorial through April 15th, is framed around the theme of slavery, with emphasis on its Lower Manhattan presence. A map in the exhibition points out significant sites in New York City's early history: where slaves were housed and traded, offices and homes of abolitionists, black-owned and mixed race businesses, and schools and churches where blacks were welcome. This intimate connection with Federal Hall - the site of our nation's first capitol, now dwarfed by looming Financial District skyscrapers - has allowed me to envision these sparsely populated grounds in the 1600s, when the three-story building stood a stone's throw away from a bustling slave market, and enslaved Africans cleared roads and labored to build the structures that would cradle this city's wealth. Curating the exhibit involved the careful assembly of all its parts, including years of research and images garnered through Community Works' programs, text developed by several noted historians, and historically-themed works created by local artists and youth. The months-long immersion in this material kept slavery on my mind far more than usual, put me in touch with several obscure and seldom discussed facts and, yes, raised more than a few questions. 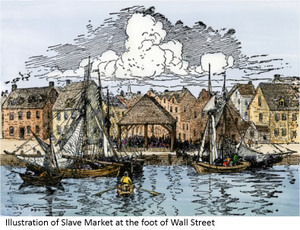 For instance, with New York being more widely regarded as a safe haven for freedom-seekers as the south warred and struggled to abolish slavery, I believe it is less commonly known that the city - via its Lower Manhattan ports - was the second largest slave trading center in the United States for more than two centuries. (Just a tiny tidbit revealed during this project, courtesy of historian Christopher Moore.) At the same time, a controversy erupted over a drawing we were forbidden to use, in association with the exhibit, because it linked a certain Wall Street bank with the practice of slavery - an unproud piece of that institution's history that shall remain under the rug from which it was almost swept.

Slavery has never been wholly taught in schools. Yet, it is more American than apple pie. The reality of it is intricately intertwined with the founding, settling, growth and economic well-being of the nation, the world even. It is perplexing that our country has managed to quell the conversation for this long. None of us will ever understand who we are until we can all face and foster an open dialogue about this monster - still in the room after four-hundred years and, clearly, not going anywhere anytime soon.

The Slavery Papers will be an on-going dialogue--with no real beginning and no end, in no specific order, and not aimed at any particular group. Just an admittedly unscholarly sharing of facts, discoveries, opinions and ideas, and possibly even unanswerable questions. If you have found your way here and you are a racist, indifferent, or uncomfortable with this conversation, I invite you to step outside of what you have learned and been taught for a moment, to transcend your fear of the unknown, and simply look at what is and what has been. This is a plain examination of the bricks and mortar of America and, in places, the larger world we live in. To be an American, whose family has been here for a few generations or more, is to understand that slavery has played some direct role in shaping who you are. And, to deny (or not know) any part of who you are is a blind commitment to not knowing yourself. I hope this will be a learning and healing exploration for us all.

In 1990, the female rap group Salt-n-Pepa released a song in response to growing concerns about sexual health, and the censorship of the topic in American mainstream media at that time: Let's Talk About Sex. They open the song in a three-way conversation, questioning whether it's okay to have this conversation and expressing concerns about what people will think. I am rapping the same tune, and with similar concerns, but asking that we talk about the other big bad S word: Slavery. 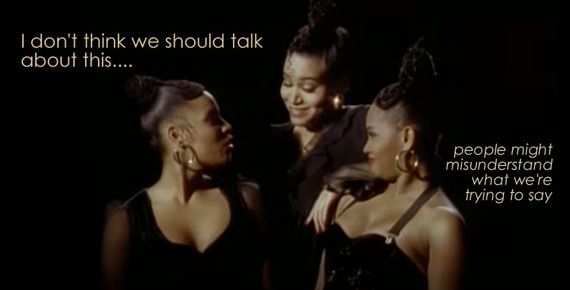