As a North Carolina graduate student, Bill Hogarth remembers fishermen proudly hanging giant marlin high on the wharf at Morehead City so people could admire and photograph the prized catch. But after the crowds lost interest, it was Hogarth's job to cut down the nearly half-ton behemoths and watch their lifeless bodies float out to sea.

Some 50 years ago, many people saw the ocean's bounty as limitless. But those images of wasted fish made a lasting impression on Hogarth, who eventually brought a conservation ethic to his role as the country's head of ocean fisheries under President George W. Bush.

"You could see the impact of the waste. I remember thinking that this couldn't last," recalled Hogarth, now 75 and director of the Florida Institute of Oceanography at the University of South Florida in St. Petersburg. I caught up with him recently when I went to Florida to oversee planning for The Pew Charitable Trusts' ocean conservation work in the Southeast. 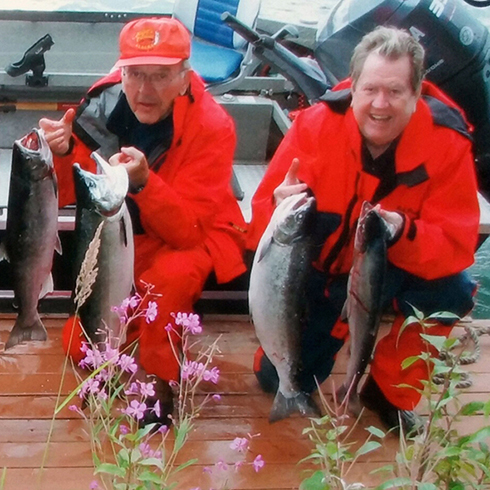 Service, shows off his catch after a 2007 fishing trip in Alaska with then-Senator Ted Stevens. The work

of Stevens, who died in 2010, strengthened conservation provisions of the federal fishery law, which is

named for him: the Magnuson-Stevens Fishery Conservation and Management Act.

Through my years of environmental conservation work, I've seen Hogarth stay true to his mission: helping ensure that the nation has abundant fish for the future. He led efforts in 2006 to make sure fishery managers had deadlines for making plans to end overfishing. He told me he believes his successful push for changes to the nation's primary fish law, the Magnuson-Stevens Fishery Conservation and Management Act, has put billions of dollars into the economy as dozens of depleted fish populations have recovered.

"I would hate to see Magnuson reopened to weaken the law," he said of current efforts to do that. "There's just not enough fish to go around. A lot of people see the ocean as a vast amount of water and think there is no way anyone could catch all those fish. We haven't done a good job of teaching conservation. People understand conservation rules on land. But when it comes to saltwater, it becomes a different mentality."

As a young man, Hogarth never dreamed of a career in fish management. He grew up in a Virginia town of 600 residents, raised by his mother and three older sisters after his father died. Young Bill intended to go to medical school. But after working as a scrub nurse and losing interest in his studies, he had a chance encounter with a professor who was studying fish. Like me, he found fish fascinating. 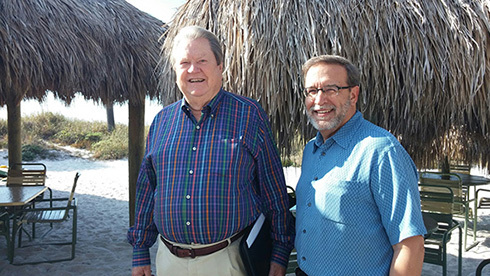 Hogarth meets with Lee Crockett, director of fish policy at The Pew Charitable Trusts, in

Hogarth went on to receive a doctorate in marine biology from North Carolina State University in Raleigh. Except for a brief stint as a grocery store owner, his career path in fish management was straight to the top. He worked 16 years for a North Carolina power company analyzing the impacts of nuclear plant discharges on the marine environment. He quit to head fisheries policy for the state for nine years, and then moved to the National Oceanic and Atmospheric Administration's Fisheries Service, where I got to know him. Humble yet outgoing, smart and straightforward, he had an ability to bring competing interests to the table--a talent that didn't go unnoticed. So in 2001 he was tapped by the U.S. secretary of commerce to lead the fisheries service.

"Most of my work had been in the Southeast and on local issues. I wondered if I had the right background. I questioned myself if I could do it and not fail. It was humbling. But I sort of felt I had a good team and I wasn't in it by myself," Hogarth told me. 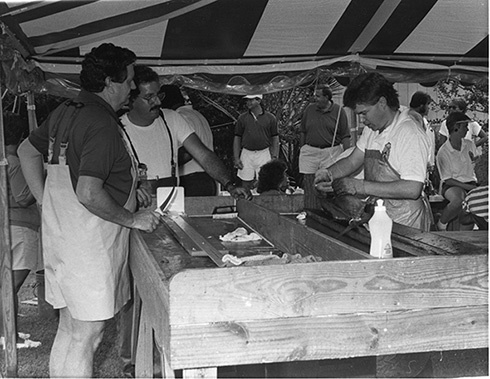 While serving as director of North Carolina's fish policy in the 1980s, Hogarth (left) spends a day

inspecting fish that are collected for study.

His doubts proved unwarranted. His seven years at the helm were marked by many achievements, including the 2006 renewal and overhaul of federal fish law, a dramatic improvement that dictates fishing rules affecting every saltwater angler and commercial fisherman today. It was a hard-fought battle: With Congress at an impasse in the waning days of its session, the renewal almost didn't happen, especially after Congress demanded certainty that the measure would end overfishing and that depleted fish populations would recover. So Hogarth and others devised a system for reducing fishing rates when species were in trouble. They understood that some economic hardship could follow when fishing restrictions would be needed.

"We were convinced we could get over the short-term pain for long-term gain," he said, crediting President Bush with backing what had to be done. "He was always very supportive. He was an avid sportsman and didn't question the conservation regulations. I never got any pushback."

Today, Hogarth agrees with me that tweaking rules under the existing law--rather than making larger changes to the law itself--can help resolve problems that remain, including getting a better handle on how to manage recreational fishing and how to deal with fish species that are recovering. He pointed to current struggles with the Gulf of Mexico red snapper, which is recovering from years of overfishing. Fish are getting larger, so quotas are met faster. Fishing seasons grow shorter even though the fish population is getting healthier--a conundrum that is hard for people to understand. Hogarth said educating the public and improving information about what fish, and how many, are being caught are challenges for the future.

"People believe we should have all the fish we want but don't realize we'll get back to where we were if we don't protect the spawners that can reproduce and replenish populations," he said.

Fish management today, Hogarth told me, is complicated by more fishing made easier with better technology--and environmental changes such as warming seas. But he describes one basic tenet that should guide all decisions: "You have to decide early in the game that fish are a public resource and everyone should enjoy the benefits."