I have a beautiful smile. My parents paid good money to an orthodontist in the early 1980s for my smile. (Thanks, George and Esther!) And I had the benefit of good dental care from a young age. "Be true to your teeth and they'll never be false to you", as the saying goes.

But my smile is not a public commodity. It is not something men can command from me, even though they try. "Smile, darling. You'd be so much prettier." I am not making that up. I have had that sentiment "offered" my way more times than I care to remember.

When I was in junior high, I was graded down for a cello solo by a male judge for not smiling. My cello teacher went nuclear on him. "You were supposed to be listening to her performance! Not grading her face!" I thought I had done well to remember the piece and to play

Hearing Hillary Clinton graded down for not smiling after election results came in this week made me all twitchy. Here is one of the great posts about the incident. Watch this short video to see the comments people made.

Why are these male pundits telling Hillary Clinton to shout less and smile more?

This post is only tangentially about politics. Vote for whoever you think will be the best president. But if the only comment is about Secretary of State Clinton's smile, then know you are participating in, and validating patriarchy, which rewards women for being pretty while ignoring what it is they have to say.

This past week, I was at my parents' house long enough to help them move some appliances and load up a car full of my childhood belongings. I even brought back a shelf's worth of trophies. (Before you start wondering, they were primarily for my participation in Junior Achievement.) 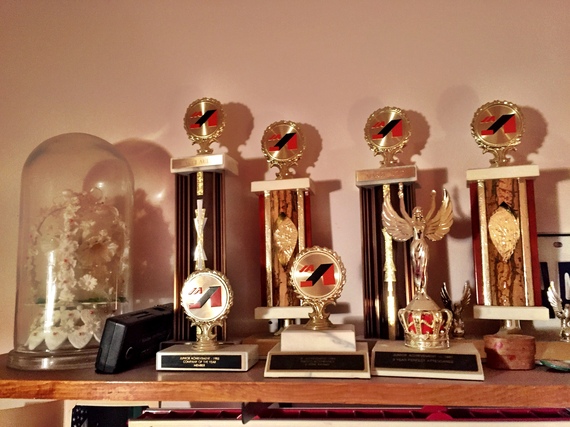 One trophy, though, which I left behind, was a plaque that said, "Smile Award". It was given to me, by a man who was an adult advisor in an organization of which I was a member, for being the girl with the best smile.

Seeing the other trophies and mementos of my youth brought back good memories. Seeing that one, however, gave me chills, because I realized just how much of my life the world has been telling me to smile, and has been rewarding me for when I followed instructions.

I pray we will some day (How about now? Is now too soon?) start rewarding young girls and grown women alike for their moxie, chutzpah, and brains instead of for the expression on their faces. If they want to smile while they are dismantling patriarchy and saving the world, more power to them. If they're too busy getting stuff done to remember to smile, that's just fine too.