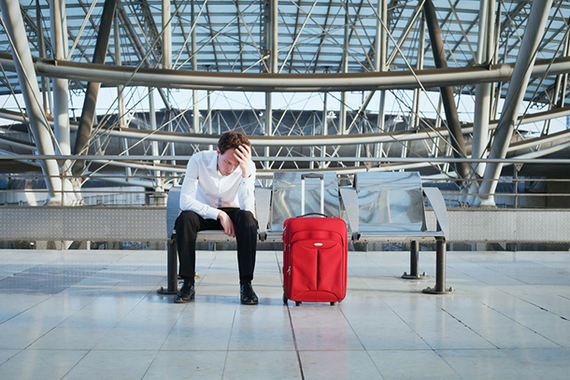 (Photo: Frustrated Businessman with Head in Hands via Shutterstock)

Fare bundling is the increasingly common airline practice of offering different levels of economy fares that provide different combinations of features at different prices. And like so many changes to the airline industry, bundling will help airlines more than consumers.

Most carriers charge for a laundry list of formerly free services, such as checked baggage, advance seat assignments, onboard snacks and beverages, pillows and blankets, ticket changes, early boarding and access to seats in rows with extra legroom or seats near the front of the plane. Now, airlines are reassembling some of these extras into tiers or bundles and giving the clusters brand names like Comfort Plus or Choice Essential. Some smaller airlines have been doing this for several years, but more recently, major U.S. carriers are catching onto the idea.

Brand variations typically involve varying frequent-flyer benefits as well as varying extras. Lines that base earnings on fare payments rather than miles automatically award minimal miles to travelers on the lowest fares. Airlines that base awards on miles typically award reduced miles to lowest-brand travelers. Air Canada, for example, awards only 25 percent of the miles flown within Canada to travelers on its least expensive Tango fare brand.

Southwest has been bundling its fare options for some time, with tiered fares offering different change fees, boarding options, onboard beverage inclusions, and frequent-flyer earnings. Several other airlines bundle in similar ways. Hawaiian and Virgin America bundle some extras with their options for increased-legroom seating. Here's an overview of the bundling practices of some major airlines.

Delta rolled out a new Basic Economy fare that is completely nonrefundable. Seats are assigned only at check-in, and even elite frequent flyers aren't eligible for the usual upgrade privileges with this fare bundle. Delta says that Basic Economy fares are available in "selected markets," which you can probably read as "where we compete with Frontier or Spirit."

American is the best example among the giant airlines, offering the most significantly differentiated options. On domestic routes, when you enter your origin and destination cities, the initial fare display posts three different nonrefundable economy-class bundles. For Chicago-to-Boston round-trips in mid-April, American displays the following options:

Beyond the initial display, one tab shows the same three brand names but with fully refundable fares, starting at $601 for Choice and adding the two higher levels with same features at slightly lower price increments. A second tab shows nonrefundable and flexible options for first class.

For now, American bundles only domestic fares. But there's no reason it couldn't brand international flights as well.

Lufthansa and Finnair are bundling fares for local European flights. Air Canada and WestJet have been bundling American for several years, with fare differences associated with changes and cancellations, frequent-flyer earnings, baggage charges, and such. Air Canada extends bundling to its long-haul international flights.

What's in It for the Airlines?

One word: more. Airlines bundle because it increases their total revenue. Yes, a branded fare can cost less than the base fare plus the other components if you bought them separately. But airlines are betting that passengers who wouldn't buy all the components separately will buy a branded bundle.

The main reason for buying priority boarding is early access to the always-overstuffed overhead bins. But if you check your bag, you don't need to worry about finding bin space, so priority boarding isn't worth $30-$80; if you buy early boarding, you can pass on the checked bag. The bundle looks good only if you have two big bags. American figures that more passengers will buy the bundle than would buy both one checked bag and early boarding separately.

When American first started bundling, the Choice option included not only the checked bag and early boarding but also no change fee, and it was priced at $68 rather than $80. But now, the reduced benefit is offset by the higher price. How's that for customer service?

Some bundles may look a bit better than others. But the big gain for the airlines is getting you to pay for something you normally would not buy as a separate option. That's especially attractive for those options that don't actually cost the airline anything. Charges for advance seat selection, early boarding, carry-on bags, and exit-row seating amount to pure profit.

On an old-time comedy program, the straight man asked the comedian what project he was working on, and he replied, "Something that I can make for a dime, sell for a dollar, and is habit-forming." Today's airlines make that comedian's project look small-time. Airlines routinely sell something that costs nothing for many dollars. What a business!

At one point, airlines employed bundling for another reason: The full range of options was only available to the public through the airlines' own websites. Recently, however, Expedia, which now controls a huge part of the OTA space, announced it would start selling branded airfare bundles from "selected" airlines. In this case you can read "selected" as meaning "any airline that will let us." And given Expedia's clout, that probably means most of them.

Other airlines will quickly adopt bundling as soon as they can develop fare buckets that will increase their total profits and they can program their information systems to handle the new fare systems. Apparently, the resource problem is the bigger barrier; developing the tiered fares is as easy as copying American or Air Canada.

It's hard to see how United will stay out of the bundling game for long. And Alaska is likely to follow, along with some of the smaller airlines.

More airfare branding is almost certainly in your future. So the approach is obvious: For any trip, determine the price of the fare brand that includes the features that are important to you, then price the fare and the extras you want separately and choose whichever total is least expensive. Make sure you account for whatever extras your frequent-flyer status or credit card might provide. You aren't likely to win the game this way, but at least you won't lose.

Read the original story: The Sneaky New Way Airlines Are Raising Fares by Ed Perkins, who is a regular contributor to SmarterTravel.