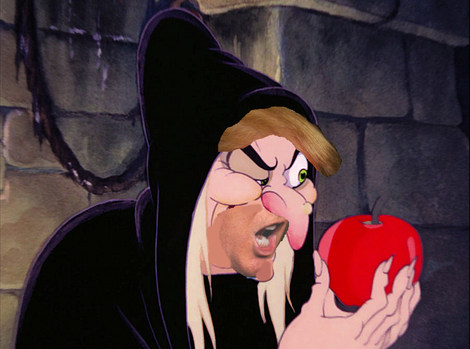 It is clear that the first presidential election in which a woman is a major party nominee has brought to the fore deep-seated issues of male insecurity and concerns about the decline of traditional gender roles. Such problems are exacerbated in periods of economic uncertainty, as they were during the Great Depression. Walt Disney's classic 1937 feature-length color animation, Snow White and Seven Dwarfs, speaks to us from that era in a way that can provide key insights into the 2016 Election.

The anxiety of many males in the Depression Era is echoed by a large portion of the male electorate in the 2016 election. Donald Trump represents the hope of working-class white men for a restoration of what they believe to be proper roles for men and women. Much of Trump's support comes from men who fit the description Franklin D. Roosevelt made of Depression victims in 1932: "the forgotten man at the bottom of the economic pyramid." They believe that Trump is remembering them. A Washington Post/ABC News poll taken just before the first presidential debate found that white men without a college degree favor Trump over Hillary Clinton by an astonishing 59 point margin (76 percent to 17 percent). That is about twice the margin (31 points) by which Mitt Romney won white, non-college-degree men over a black male opponent four years ago. The same poll found college-educated white women going for Clinton 57-32.

Mr. Trump shares with many of his white male supporters an obvious insecurity about his "manhood." The candidate's bragging before a national television audience about the size of his male organ and writing, "my fingers are long and beautiful, as, it has been well documented, are various other parts of my body," his love for such "strong man" leaders as Vladimir Putin, his decision to release his putative testosterone level as one of the few bits of information about his health that he would reveal to voters, and his braggadocio about groping women are just a few of the many indications that Trump suffers from an affliction that is not listed in the American Psychiatric Association's Diagnostic and Statistical Manual of Mental Disorders, but has caused more harm throughout human history than any other psychological disorder. I call it "Acute Masculine Insecurity Disorder" (AMID).

That malady was widespread among men during the economic cataclysm of the 1930s. The traditional male role of provider was undercut, leaving numerous men feeling emasculated. In many cases, women had jobs while their husbands were unemployed. That circumstance produced a tangible longing to reestablish the putative "natural" order of male authority and female dependence, which was reflected in the decade's popular culture. The song "Remember My Forgotten Man" from the movie Gold Diggers of 1933, captured this yearning perfectly. Joan Blondell makes a woman's call for a return of men to their traditional position: "I was happy then / He used to take care of me / Won't you bring him back again? / 'Cause ever since the world began / A woman's got to have a man."

Disney's characters Snow White and the Wicked Queen present the same message a bit more subtly. The movie is a thinly veiled warning about what happens when women get out of their "place" by obtaining power--and a demand for the restoration of male dominance and female subordination. The Wicked Queen is as much the personification of the evil that will supposedly result from a woman escaping male control and gaining power as is Agave in Euripides' The Bacchae (405 BCE). 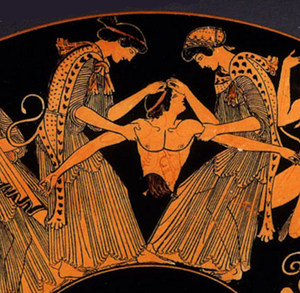 The message is that power causes women to go insane and become absolutely evil. The Disney cartoon also provides its vision of the ideal female: a totally naïve, beautiful young woman who embodies the characteristics of the nineteenth-century vision of "true womanhood" (domesticity, submissiveness, purity, and piety), is so gullible that she takes a poisoned apple from a con woman after she has been strongly warned ("Now, don't forget, my dear. The old queen's a sly one--full of witchcraft. So beware of strangers."), and lies comatose until revived and carried off to live "happily ever after" by a heroic man.

Grumpy gives voice to the Disney (and Trump-backer) view of women when he proclaims of Snow White: "She's a female! And all females is poison! They're full of wicked wiles!" Asked by a fellow dwarf what wicked wiles are, Grumpy answers, "I don't know, but I'm agin' 'em."

It is obvious that if the Disney-intended message of Snow White is applied to the current election, Hillary Clinton is the powerful woman full of wicked wiles blending mummy dust, the black of night, an old hag's cackle, a scream of fright, a blast of wind and a thunderbolt into her witch's brew. Trump never misses an opportunity to say as much, and it is plain that most of his male followers fully believe it and view the Democratic nominee as a witch--though they prefer to alter the word's first letter.

Trump as the Wicked Queen

But Disney's misogynist preachment from eight decades ago actually carries a different--though unintended--message for us this year:

It is Donald Trump who is the Wicked Queen.

He's the one who found a recipe for a poisoned apple: "One taste of the poisoned apple, and the victim's eyes will close forever in the sleeping death." Then he presented it to the American people and it closed the eyes of those who bit into it.

"This is no ordinary apple," Trump in effect says as he offers his promises to fix everything. "It's a magic wishing apple." 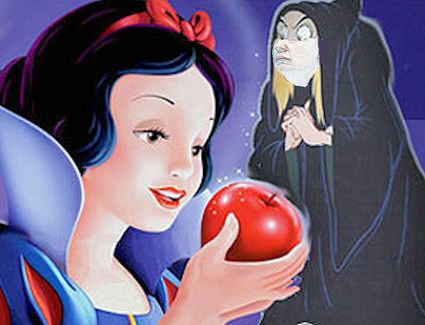 "Yes! One bite and all your dreams will come true!" the con man tells his marks: "I will give you everything. I will give you what you've been looking for for 50 years. I'm the only one."

"The crime and violence that today afflicts our nation will soon--and I mean very soon--come to an end."

I'll repeal Obamacare "and replace [it] with something terrific."

"I know more about ISIS than the generals do. Believe me." "I have a foolproof way of winning the war with ISIS." "ISIS will be gone if I'm elected president. And they'll be gone quickly."

"If you do this one simple thing, you can deliver justice for every single person who has been wronged by the system. . . . Millions of jobs are going to come pouring back into our country. . . . and I'm gonna bring back safe neighborhoods."

"Really?" Wicked Queen Trump's dupes (most of whom have "skin white as snow") giggle excitedly.

"Trust me!" "Believe me!" "It will be incredible--totally unbelievable!"

It is entirely understandable that struggling working-class Americans who have been left out by an economy that has produced vast wealth for people like Donald Trump yearn for a savior who can perform magic that will instantly solve all their problems. But the Wicked Queen dressed in an unbuttoned suit jacket and oversized tie encouraging them to bite his magic wishing apple is the opposite of a savior. The bright shiny exterior of the apple covers what is beneath its skin, which has the same initials as "bright shiny." Those who bite that wishing apple are affirming that they have no more sense than the Disney version of Snow White.

If, between now and Election Day, any sizable number of non-college-educated white men awaken from the sleeping death into which taking a bite from Trump's poisoned wishing apple put them and see that he has been playing them for fools on the level of Disney's Snow White, Hillary Clinton's victory will become a landslide of historic proportions.

{Robert S. McElvaine teaches history at Millsaps College, is the author of The Great Depression, and has just completed a draft of his first novel, "What It Feels Like."}