Pleasant images of nativity scenes adorn hearth and home during Christmas and Advent seasons, but when we stop and take a closer look, our perspectives often change. Upon a closer look, that momentous sojourn in the Levant was more difficult than we might have thought. An unwed pregnant teenager; a forced return to an immigrant's homeland for "tax-registration" purposes; the dislocation of the displaced; the weariness of homeless travelers -- this was not a sightseeing excursion! Like Syrian refugees in recent months, and as the followers of the Son of Man would later find, they had no place to lay their heads.

An yet, Luke's story of the birth of Jesus bolsters hope for humanity, not because it offers cookies to midnight visitors or gifts to "nice" children, but because it challenges the bondage of worldly domination and the leveraging of uneven justice. In its graphic presentation of "The Birth of Christ," the striking artwork of The Saint John's Bible exposes several reversals, which pique the social conscience of the modern viewer, while also illuminating authentic meanings in the biblical Christmas story. 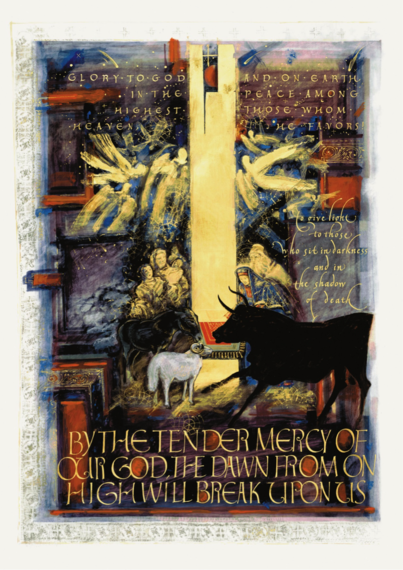 Within this powerful work of art, Donald Jackson notes several reversals that challenge our staid notions of the birth of Jesus on various levels. First, rather than focusing on a baby in a manger, this painting features the manger as an altar table echoed in the painting of the "Life in Community" of the Apostles in Acts 4 (here and elsewhere I am indebted to Susan Sink, The Art of The Saint John's Bible, Collegeville, MN: Liturgical Press, 2013). The vertical light-beam from heaven, intersected by the illuminating angels, forms the shape of a cross -- founded upon the altar/manger as its base. The ram among the animals (echoed in other paintings of Passover sacrifice) brings home the point that the birth of the Christ-child signals his sacrifice on the cross -- a poignant destiny, indeed. 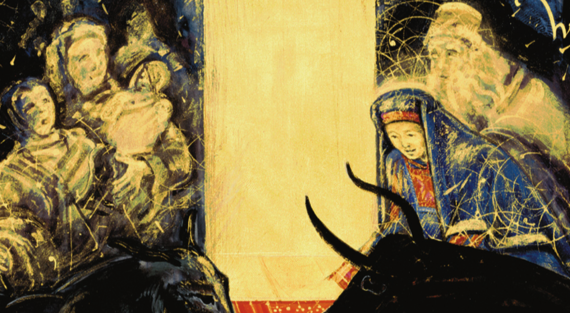 (Artist: Donald Jackson, a focus on the manger as altar)

Another colorful feature of this painting highlights the images of those coming to see the Christ-child. Mary, Joseph, and the baby are somewhat diminished in their presentation, but the most vivid focus is upon those who have come to see. And, while the biblical text has no mention of a donkey, its inclusion here prefigures Jesus' riding into Jerusalem later, at the end of his ministry, not on a conquering white stallion, but on the humble colt of a donkey. Therefore, a societal reversal is apparent in God's glory being revealed to the humble and lowly -- the dispossessed of the land. These are those on whom God's favor is shown. 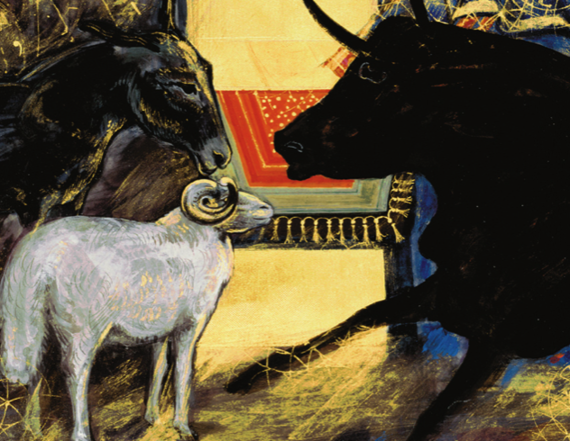 Speaking of animals, the ox here featured resembles the Neolithic cave art, discovered in Lascaux, France, several decades ago. Thus, even the animals in the manger scene represent a multiplicity of cultures, periods, and associations. This leads into a text quoted from Zechariah's prophecy, that God's tender mercy will "give light to those who sit in darkness in the shadow of death, to guide our feet into the way of peace." (Luke 1:79) The good news of God's saving-revealing work transcends the boundaries of time, place, and culture -- bringing liberation to all by the power of grace and truth. 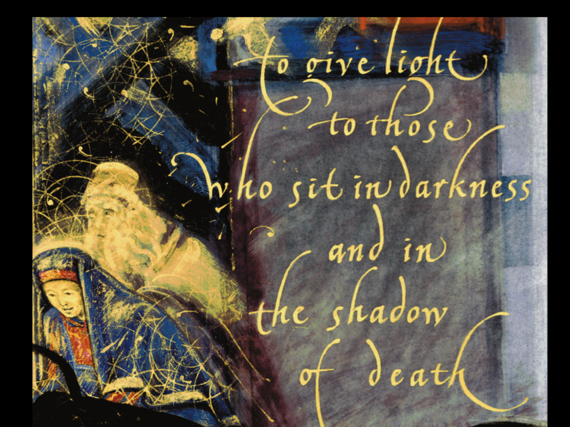 The final irony of this painting, and the biblical text behind it, is that it challenges the political power of Empire and domination with a chorus of angels delivered to lowly shepherds: "Glory to God in the highest heaven, and on earth peace among those whom he favors!" (Luke 2:14) A God who favors the lowly and dispossessed of the land is the God revealed in Luke's birth story--not the lords of merchandise, prominence, or power. This message of hope to the lowly and the downtrodden reminds us all of the first priorities of the God revealed in the Christmas story. Love, peace, and light are what the birth of Jesus heralds, and that good news is what this season is all about.

(Artist: Donald Jackson, the chorus of the angels)

As we consider Syrian travelers and refugees today, one cannot help but be reminded of parallels with Mary and Joseph and their difficult situation twenty-one centuries ago. The thrust of Luke's account is not the establishment of one group over another, but a witness to the mercy and grace of God--embracing the downcast and providing refuge for the dispossessed. Sometimes it takes a revelation from on high for our time-bound sensibilities to be reversed, and now as much as ever, we are still in need of "dawn from on high" to break upon us, by the tender mercy of God. 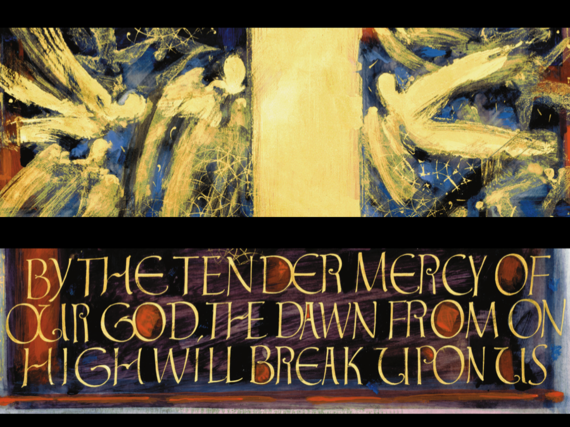 And, if that happens, we might yet catch a glimpse of the true meaning of the season in ways beyond what we'd imagined. After all, if God's redemptive work privileged aliens on the road in the past, might we find ways of yet being open to such reversals in the present? If so, perhaps that would be the greatest reversal of all; merry Christmas!