The Bible is not a safe book. It confronts, disturbs and challenges as well as being comforting, instructive and convicting. As arguably the most impactful book in human history, the reason is that it continues to speak to contemporary audiences -- sometimes in ways that sometimes surprise us -- today and always.

In the ninth century, the Book of Kells, the most famous of ancient illuminated Bibles, was produced by Irish monks. They adorned the hand-lettered text with hundreds of images and artistic additions, connecting biblical themes with real-life issues. In Michelangelo's day, the Ceiling of the Sistine Chapel rendered in artistic form the highlights of biblical themes in prophetic voice. Now, in the twenty-first century, as the first Benedictine-commissioned illuminated Bible in five and a half centuries, an artistic and spiritual contribution of similar magnitude and importance to these other great works has been produced. And that work speaks today in ways powerful and convicting.

The actual production of the Saint John's Bible took place between 2001 and 2011, but its planning had gone on long before that. Producing an illuminated Bible (with artistic images and embossed gold leaf -- representing the divine presence within the artwork) had been the lifelong dream of the world's leading calligrapher, Donald Jackson of Wales -- the official scribe of the Queen of England. Jackson had shared his vision of such a project publicly since 1970, but it was finally commissioned by the Saint John's Abby in Minnesota in 1998. While the original manuscript remains unbound, 299 exact representations of the seven volumes are now made available in the Heritage Edition, which will allow the project to continue to speak to multiple audiences for centuries to come.

The beauty of the calligraphy and the artwork produced by thirteen scribes and artists is unprecedented, and yet most striking is the social conscience of the artwork. Indeed, while all of the 160 works of art that adorn the seven volumes of the Saint John's Bible illustrate classic biblical texts meaningfully, especially captivating are those that address contemporary issues with a sense of biblical social conscience. Among these, one of the most instructive paintings is the Luke Anthology, contributed by several artists: Donald Jackson, Sally Mae Joseph and Aidan Hart. This painting features key parables in the Gospel of Luke: The Lost Sheep, The Lost Coin, the Lost Son, the Good Samaritan and Lazarus and Dives, and these representations speak to the social conscience of audiences in three special ways. 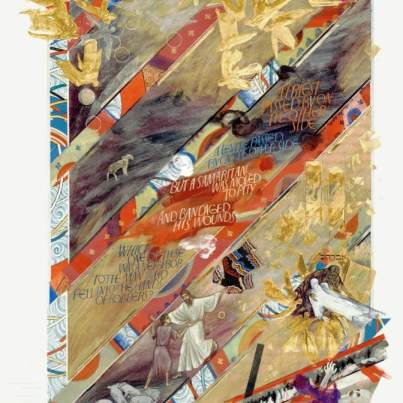 First, in the lower right hand corner, the story of poor Lazarus and wealthy Dives is sketched in lucid, provocative ways. As the story goes in Luke 16:19-31, the fortunes of the poor man and the rich man are reversed in the afterlife. Whereas poor Lazarus was hungry and covered with sores in this life, in the next he is comforted in the embrace of Abraham. Whereas the rich man, Dives, had it good in the present life, in the next he is tormented and thirsty, pleading for relief from Lazarus. This is denied, as is the rich man's plea that some one go and warn his five brothers. If they have not heeded the way of Moses and the prophets, why would a warning from beyond the grave make any difference now? Note how the torment of the rich man, Dives, is illustrated powerfully in this painting, as is the comforting of poor Lazarus. If this is what the next world will be like, how might that impact our social awareness and concern in the present? 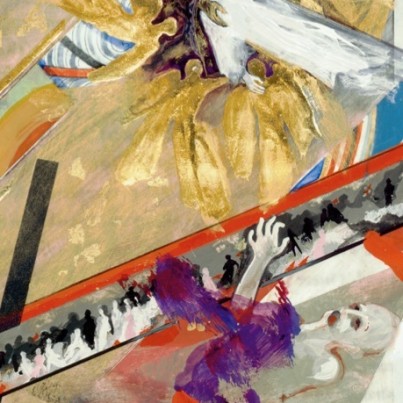 Second, The Parable of the Good Samaritan in Luke 10:25-37 is referenced, but no images of are used. Only four sentences are displayed, concluding with a question: "A priest passed by on the other side." "A Levite passed by on the other side." "But a Samaritan was moved to pity and bandaged his wounds." "Which one of these was a neighbor to the man who fell into the hands of robbers?" In looking at this progression moving diagonally from left to right and top to bottom, it is interesting that no images of people are used. The viewer is thus deprived of limiting any of the characters to a single conception. Priest, Levite or any other leader, all who neglect the man in need fall short of their neighborly duty. And whether the helper is a Samaritan or of any other ethnic or religious identity, those who show mercy are commended for their neighborly example. Thus, the parable continues to speak as we think about what it means to be an exemplary neighbor within and beyond our borders. 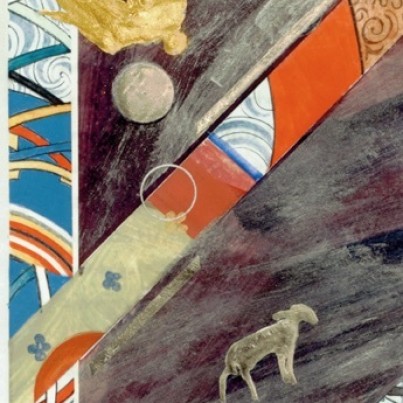 The third impact of the painting draws together the three parables of Luke 15 in three sketches. With angels hovering around them, a number of hollow coins are accompanied by a silver coin -- the one the widow searched for and finally found. And, the lost sheep, sought by the shepherd, stands out against a dark background. The most graphic parable, though, is that of The Prodigal Son. Here the son moves from the pigs he had been reduced to feeding to the embrace of the loving father, whose gracious welcome was undeserved. A coat of many colors is unfurled as a flag, and the story features beautifully the theme of forgiveness and reconciliation. And yet, as the eye moves diagonally from right to left and from bottom to top, the forgiveness theme makes an abrupt move. With the application of gold-leaf foil in the form of two Twin Towers, the forgiveness theme strikes home, causing this viewer to swallow hard. 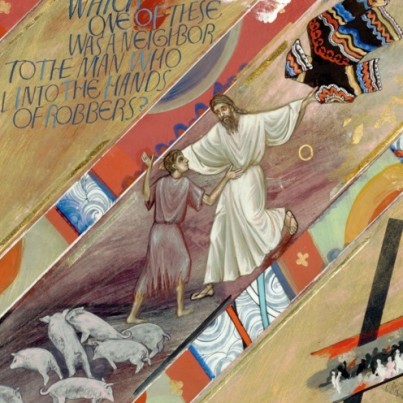 Receiving home a wasteful and ungrateful child is one thing, but can individuals or groups now extend grace following a murderous terrorist act -- the most egregious foreign assault on American soil in our nation's history, save, perhaps Pearl Harbor? That is the question The Saint John's Bible raises for its viewers today. The Bible has never been a safe book; it meddles, confronts and challenges, and yet it also speaks in ways potentially transformative if we are open to the truth. And, in the hands of Donald Jackson and his associates, the social conscience of this amazing work continues to speak in ways prophetic -- on the eleventh of September, and always. 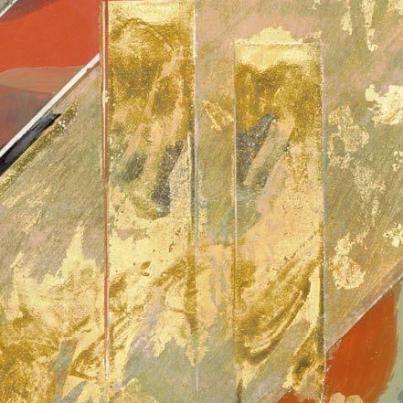