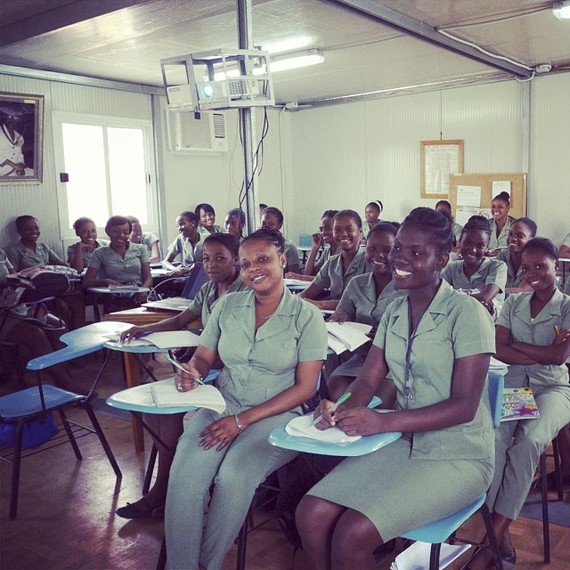 On a rather humid Sunday afternoon, a crowded lobby entrance at 92Y on Manhattan's upper east side leads one to the 2015 Social Good Summit. In through the heavy glass doors and a quick stop at a registration table to pick up a badge before proceeding to an old elevator, a group of attendees, speakers and journalists bustle around a crowded seating area on the second floor chatting loudly.

The energy is palpable and the pressure is on. It is, after all, the week of the United Nations General Assembly.

Governments, civil society, NGO's and foreign press have taken over the city making it their own with formal and informal discussion on creating sustainable cities, access to health care, the Syrian refugee crisis, climate change and even religion, all under the umbrella of the Sustainable Development Goals, or "Agenda 2030" as it is often referred to within diplomatic circles.

In a refreshing but short discussion on reproductive health & rights, the Executive Director of the United Nations Population Fund (UNFPA), Babatunde Osotimehin joined actress and activist Ashley Judd for a timely chat on women, youth and the need for education regarding access to services.

With over 1.8 billion young people entering into their reproductive health years and over 220 million women and girls who lack access to modern family planning, here are four important lessons we learned from the Social Good Summit:

4. It's her choice.
Popular perception will err on the side of caution, telling you that a woman's reproductive health is up for debate. Do not be mislead; a woman's reproductive health is hers and hers alone to decide. The partner or partners she chooses during her reproductive years or what method of birth control she chooses to use, and even the sort of services she seeks upon pregnancy including what kind of birthing process she leans towards -- all are choices that she will, and can make for herself.

3. Education is everything.
Let's be perfectly honest, we cannot control the reproductive health choices of the 1.8 billion young people in the world. A year ago, I recall a tweet from a friend who was asking if it was okay to let her young teenage son have a sleepover with one of his close girl friends. I remember responding quickly sharing that truly as a parent, one would never be able to control the decisions their children made about sex -- I would know, having been a teenager myself. In my response, I simply emphasized the need for a parent to fully educate their child, to give them all the necessary information on reproductive health and trust that they would make empowered choices. Sexual reproductive health education is imperative and access to information is key in setting young people up for success.

Let's bring it back to the age of 14 on that first day of school after summer break. You're seated in class, heart racing and fingers clammy as your dread that moment that you homeroom teacher asks you to get up and share what you did over the summer. Having no connections to the other students in class - often shy of new faces - one never felt comfortable being put on the spot to share anything. It was always up to the teacher to strategize ways of "breaking the ice" in order to involve all students and ultimately forge a sense of belonging within the class. The teacher needed to make sure that all his/her students felt that their voices, their needs and their aspirations mattered.

As long as we continue to acknowledge the voices of young people, they will continue to ask questions without fear of ridicule or shame, therefore allowing them to learn about, and make healthy reproductive health choices.

1. Empower a girl, build a nation.
According to the discussion between Judd and Osotimehin, young girls are the most vulnerable population when it comes to reproductive health. They are mostly likely to be married at an early age, to be denied access to education, to become pregnant during conflict or displacement and to enter into poverty. By educating, listening and empowering a young girl, essentially empowering her to plan her own path, we create a force to be reckoned with.

Nations are built upon the grace, perseverance and strength that women bring to the table. Denying a young girl the opportunity to make her own empowered choices greatly diminishes the power of a country to develop successfully.