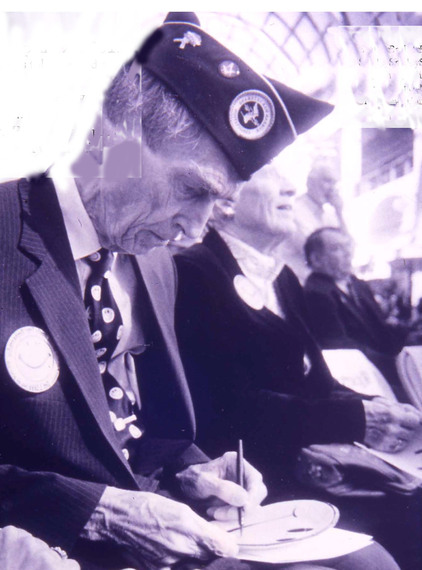 The world's most recognized and beloved icon, the beaming yellow Smiley Face, was created in December of 1963 in Worcester, MA by a commercial artist and decorated WWII vet named Harvey Ball who never made more than the $45 he was paid for creating it. Swiftly Smiley "went viral" in an age before computers and became the most popular symbol of good will and good cheer on the planet.

As the years passed Harvey Ball became concerned about the over-commercialization of his symbol, and how its original meaning had become lost in the marketplace. The Smiley Face knows no politics, no geography and no religion and Harvey wanted to make that clear. So he declared that the first Friday in October each year would become World Smile Day with the slogan "Do an act of kindness. Help one person smile."

That's our assignment for Friday, Oct. 2, 2015, as Harvey and his creation are remembered and celebrated in his hometown of Worcester, MA and around the world. Here is Harvey's story from the forthcoming book "The Saga of Smiley--How a Cheerful Icon Changed the World":

Ask the man on the street who invented the Smiley Face and he might reply that it was created by Forrest Gump in the eponymous 1994 film, when Forrest wiped his muddy face on a yellow T-shirt. But Smiley came into being at a particular time--December of 1963--in a particular place--Worcester, Massachusetts, once a booming industrial metropolis of factories spewing out textiles and abrasives, but by the early sixties, a sleepy city that its 170,000 citizens affectionately called "Wormtown."

In December of 1963, the United States was reeling from the traumas of the Kennedy assassination and growing opposition to the Viet Nam war. And in Worcester, MA, the executives of the State Mutual Life Assurance Company of Worcester (now Hanover Insurance), detecting a critical drop in employee morale in the wake of an unpopular merger, asked Harvey Ball, a self-employed graphic artist and decorated World War II veteran, to design a button that would cheer up their cranky employees and improve customer relations.

In his studio, Harvey thought about the project for a while. Then he drew a circle with a grin. "I made a circle with a smile for a mouth on yellow paper, because it was sunshiny and bright", he told a reporter for the Associated Press some years later. He studied the image but then realized that if you turned it upside down, it became a frown. What if the company's employees wore the button upside down? So Harvey added two eyes and the Smiley Face greeted a waiting world.

Harvey drew the circle and the two non-matching eyes by hand because, as he explained later, "You can take a compass and draw a perfect circle and make two perfect eyes as neat as can be. Or you can do it freehand and have some fun with it. Like I did. Give it character." (An authentic Harvey Ball Smiley has a hand-drawn circle, a crooked grin and one eye--the right--larger than the other. Beware of too symmetrical imitations!)

Worcester Mutual made 100 buttons for employees to wear and give to customers. They disappeared overnight. Then the company ordered 10,000 more. Smiley was launched into the stratosphere and quickly circled the globe. Harvey Ball never received more than the $45 he was paid for his design, and by the time the insurance company tried to register Smiley eight years later, they learned that it was impossible, because the image, reproduced 50 million times in the year 1971 alone, was by then in the public domain.

Smiley instantly became a symbol of his times. The baby boomer generation adopted and adapted him to represent their worldviews as they evolved through the years. When, in 1998, the US Postal Service asked the public to vote on which image best represented the decade of the1970's, Smiley won by a landslide.

The cheery Smiley Face postage stamp was issued by the post office on the first World Smile Day®, October 1,1999, in Smiley's home town of Worcester, MA. The USPS issued a special cancellation for the event. During the ceremony, Harvey Ball said that he believed Smiley

The USPS's stamp supply sold out as quickly as the original Smiley buttons.

Harvey Ross Ball, creator of the most famous American icon after the Stars and Stripes, was a true American hero, a decorated World War II vet awarded the Bronze Star for heroism during the Battle of Okinawa. In the spring of 1945, during the deadly battle which lasted for 82 days, when three of Ball's comrades were killed by a wayward shell as they stood next to him, he did not ponder whether fate had saved him for a greater destiny. (But neither did he ever forget his fallen buddies. He painted their portraits in uniform from memory years later.) Harvey was decorated for his bravery in World War II. He served 27 years in the National Guard and retired a brigadier general, and then served six years in the Army Reserves.

Harvey, a tall, laconic Yankee, born in 1921, was a solitary soul, not much given to, socializing, talking, or even smiling. But when he died in 2001, he had figured out his purpose in life. As he told People Magazine in 1998: "I taught the whole world how to smile."

After Harvey died on April 12, 2001, at the age of 79, his son Charles told the media : "He was proud and pleased to have served his country and raise a family...He died with no apologies and no regrets. His moral compass stayed on north and never wavered."

And he left us the legacy of a smile.