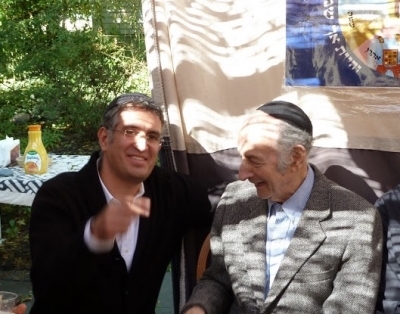 (With Rabbi Gold, in the Sukkah of Marc and Ilana Cohen)

Rabbi Ben-Zion Gold was born in Radom, Poland, was the only member of his family to survive the Holocaust, and was the director of Harvard Hillel and Jewish chaplain at Harvard University from 1958 until 1990. He passed away this week at the age of 93. These words of eulogy for him - which I delivered at his funeral, where a remarkable collection of tributes were sung and spoken - are the best message I can think to share heading into this springtime Shabbat and this Passover holiday of sacred story and renewal:

The Song of Songs of a Great Soul

Members of the Worship and Study community at Harvard Hillel may remember a sunny Sabbath morning, during the intermediate days of Passover - almost exactly four years ago - when our young Student Conservative-Egalitarian worship group decided to go outdoors into the courtyard of our building, to read the Song of Songs in the springtime sunshine, so appropriate to the poetry of the biblical book prescribed for the special Shabbat of Pesach.

Sam Fuchs, who escorted Ben-Zion to Shabbat morning services so many times through the past several years, probably remembers especially well - how Ben came in to our building that morning, and, instead of heading upstairs on his customary and well-worn path, the Worship and Study Minyan's Rabbi and Teacher instead made a seemingly instinctual bee-line for the courtyard, to join in the circle of students outdoors, to celebrate the Passover springtime with the young people, and to participate in reading the Song of Songs in the fresh air.

And I remember, sitting in that courtyard, how, throughout the reading, inquisitive heads, one after the other, kept popping out of the upstairs windows, from the room where the Worship and Study Minyan meets, and pointing fingers, too - members of the Minyan peering down and gesturing at Ben-Zion, seemingly wondering if the youngsters had somehow stolen their spiritual leader. Not to worry - as soon as we were done with the Song of Songs, Ben made his way upstairs, to the Minyan he had founded, his spiritual home of so many decades.

Several people asked me afterwards, at Kiddush, whether Rabbi Gold had been confused. On the contrary - I think it was one of the sharpest and most lucid moments of his final years. In that cherished time together in the courtyard, a new generation of students glimpsed the true spirit of an eternal head of Harvard Hillel, always eager to share Jewish life with young people, always interested in something creative, personal, meaningful, traditional and new.

I say "pruning song," because the word Zamir in the biblical text is a double entendre, that can mean both Song and Cutting (as with trimming back branches or foliage) - and in that latter sense, the word connotes a steely and harsh reality, a hard but necessary truth in cultivating a field of growing things.

King David, then - Ne'im Zemirot Yisrael, according to the Second Book of Samuel - was, by that same double etymology, either "the sweet singer of Israel" or "the best blade in the land."

In equally real senses - one literal, one metaphorical - Rabbi Ben-Zion Gold was both.

I was fortunate to meet our rabbi and teacher several years before I ever came to direct Harvard Hillel, when he was still writing and publishing sharp words of Torah. Morenu ve-Rabbenu, our Teacher and Master, knew, perhaps better than any Jewish leader I have ever met - and he understood this in his very being - that even the strongest of sentiments and grandest and most cherished of ideas, within oneself, must often be pruned and trained with rigor, if they are to flourish.

Speaking of melodies, I first encountered Rabbi Gold at a Shabbat table, in an apartment on Cambridge's Broadway, where he had been invited by several young Harvard Hillel alumni, and friends, for lunch and for a wonderful afternoon of Zemirot and Niggunim, the poetic Sabbath table-songs and the wordless old-world tunes that he loved so much.

I remember, from that first encounter, that Rabbi Gold surprised the more musically orthodox of us at that table by switching melodies frequently between the stanzas of each song, whereas we might have been inclined to sing a whole long poem through in each musical version. It was a bit of a revelation to the assembled young people - myself included in that rubric, at the time - that one could do that, cut a traditional melody short after a verse or two, so as to share the next tune for the same song. And I remember so vividly Rabbi Gold's somewhat mischievous smile at our surprise.

As I recall, he said, "You don't always have to be so reverent (actually, I think he said "so frum") as to sing out each melody all the way through every song, if we already know the tune, let's hear the one that's new."

Speaking of rigor, and of the constant challenging and refining of one's own ideas - in that same year, Rabbi Gold published in the Boston Review a talk he had given at Harvard Hillel on April the 14th 2002 - on "The Diaspora and the Intifada." In it, he took the brave stance that celebrating Israeli democracy, and placing one's highest hopes in the promise and the future of our Jewish homeland, sometimes could, and, by his lights sometimes should mean siding with opposition voices within Israeli politics.

Ben-Zion, whose very name reflects the national aspirations of our people, who described himself as being in some ways "more comfortable in Israel than in America" - and who, indeed, toward the end of his life, was more comfortable in Hebrew than in English - was not a man at all timid or ambivalent about his Zionism, about its centrality in his existence - and he said:

"The minority whose love for Israel prompts them to provide a critical perspective have a difficult but important function to perform. The critical opposition in Israel is alive and active ... Our role is to support the forces in Israel that want to make sure that, in its battle for security, Israel retains its sanity and soul."

I recall this not to make a eulogy political - though I don't think Ben-Zion would mind - but rather to highlight the nuance and the rigor of our Rabbi's ethos, a legacy I consider so essential to the ethos and the soul of the Harvard Hillel he built. Ben-Zion challenged those around him, and not infrequently, even very late in his life, he surprised those around him; and it is important to remember that this was because he also continually challenged himself, perhaps even surprised himself, never becoming wed irrevocably to a particular iteration or interpretation of his own most sacred ideas.

Five years ago, when I found myself approaching Ben-Zion's former directorship, he and I spent several afternoons in his living room on Dana Street. Frequently he would take a binder or a scrap-book down from the shelves to show me something he had written, or to illustrate a point with a clipping from the Crimson or the Gazette. He was still sharp in many ways, but his memory was fading, and sometimes, in answer to a question of mine he would say, "I wrote something about that," and he would know exactly where to reach for it physically, and then he would say, "but you will have to see what I said" - and several times he made sure I understood that he himself might not say exactly the same thing so many years later.

It is a rare soul that is as powerful and as compelling as Ben-Zion's, so completely dedicated, and at the same time so unfettered by its own insights, so continually open to new ones throughout an entire lifetime.

It is arguable whether Judaism has a concept quite like a Mahatma - and even more questionable whether Ben-Zion ever aspired to anything like the mantle of the Hasidic Rebbes he knew in his youth - but as I read the many personal remembrances sent over email from Harvard Hillel alumni this week, so many of them saying, in effect, "I would not be the Jewish person I am today were it not for Rabbi Gold," it is undeniable that we are speaking of one of this world's truly great souls.

The Torah speaks about the many individuals our ancestors Abraham and Sarah gathered to themselves, into their camp in Haran, as "kol hanefesh asher asu" - literally, "all the soul they had made."

Kol hanefesh asher asita, morenu ve-rabbenu - all the soul you created, Rabbi Gold, the Jewish lives you nurtured into being.

Just very recently, not a couple of years ago, in an interview in Yiddish (that you can find in a video recording online) Jane Meyers asked Ben-Zion whether, amid all the melodies, all the nigunnim that he insisted he hadn't collected but that had rather "collected themselves" - "zich umgezammelt," as he put it - all through his lifetime, whether he himself had ever composed a niggun of his own.

Characteristically, Ben-Zion's answer reflected the grace and the dignity with which he handled his own loss of memory:

As his great soul departs this world, I want to say to the man I was so honored to know, Have no doubt, ihr hot takeh geshaft a nign - you composed a mighty melody, a veritable Song of Songs, and of Souls - the greatest such composition many here today have ever known.