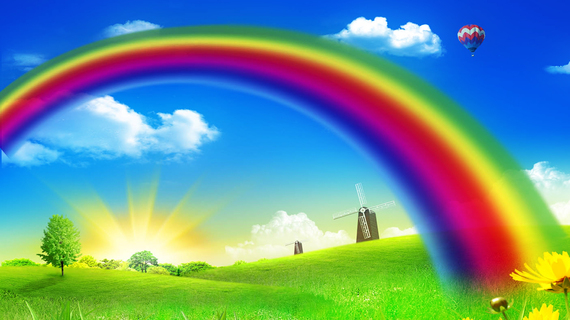 According to Ernie Harburg, this beautiful and iconic song, lyrics by his father, Yip, and melody by Harold Arlen, is a mantra. And in his way of thinking, it's a mantra for social justice, immigration, anti-bigotry and for believing in the right of home to be anywhere you land. "Why oh why can't I?" is Yip's question to Arlen's climactic music. (In Japanese, the words translate as "Why can't I do it?")

Dave Ogrin, the composer of The Wild Women of Wongo, insists that Yip Harburg is the bar for great lyric writing. He said that every writer wants to write a song that moves people and endures in the way Over the Rainbow does. Bill Goldstein, of Motown fame and countless scores calls this song a "timeless classic."

So why "Somewhere Over the Rainbow" and why right now?

Ernie Harburg supports Hillary Clinton. He says it's time for a woman President. He believes that the song "Somewhere Over the Rainbow" embodies Clinton's run for President and speaks to many of the problems that this country is going through today. He insists that there is no reason to give in to Trump's cynicism, racism and lying. A new adaptation of the musical stage version of The Wizard of Oz is being performed this fall at The Harlem Repertory Theatre, directed by Keith Lee Grant, and Ernie is looking to hear a more percussive version of "Over the Rainbow" for the final number. He wants everyone on their feet the same way he wants everyone to get on their feet and go vote for the woman candidate. And with the Wicked Witch controlling the hourglass, time is running out.

But first, let's start with a little history about Yip Harburg for those who naturally know and love the song, but are unfamiliar with the force and energy--much less Yip's name--behind it.

Yip Harburg was born in poverty in the lower east side in 1896 and always understood the importance of making his own home. His parents had migrated from Russia and his childhood was surrounded by other children whose parents, too, had migrated from countries where their lives were in danger from political enemies and hunger. They came here harboring the hope that they could live more freely in the new country. And feed their families. To migrate to America is going over the rainbow, as Simon Schama pointed out in Part 4 ("Over the Rainbow") of his recent BBC-PBS documentary The Story of the Jews.

Yip's nickname Yip is derived from Yipsel...which is how the acronym for the Young People's Socialist League, YPSL, of which Yip was later to become a proud member, is pronounced. That's one story anyway; the other is that Yipsl in Russian Yiddish means "little squirrel" and Yip moved around as fast and furious as any of Tompkins's Square Park's squirrels, athletic and playful.

It's easy to understand why socialism was appealing to a kid from the tenements. One visit to the New York Tenement Museum bears witness to how rough those lives were. Sharing one bathroom among several families, no heat, no electricity, windowless rooms, a sense of pervading struggle... if people hadn't been communal and helpful with each other, they wouldn't have made it.

Yip discovered that he could write lyrics and write he did. All through high school and college with the encouragement of his neighbor and good pal Ira Gershwin, he poured out witty prose and poems. But when he had the chance to go into business or watch his ever increasingly poor parents get poorer, he chose business. He did not have the security of the Gershwin's and other musical friends to take the risk of being an artist. But when the crash came in 1929 and his once successful business was destroyed, he was at last, free. In his words, "I felt I was being born." And lucky for us.

Success didn't happen overnight. Like all artists, he kept training. But one day when a presentable, but down trodden man on the street asked him for ten cents, he was on his way. "Brother Can you Spare a Dime," written in 1932 with composerJay Gorney, became the anthem for the Great Depression. It was written about the people who worked hard to build this country and who couldn't get enough to eat.

"Once, I built a railroad, Made it run, Made it run against time. Once I built a railroad; now it's done. Brother, can you spare a dime?" Over the years, the song has been covered by many performers around the world and remains timeless and unfortunately ever current. "Why should I be standing in line, just waiting for bread?"

Yip was inspired by the lives around him and his lyrics inspired others. Elliot Ames, host on radio's WVOX at 1460am, says Yip was the most literate and wittiest of the Great American Songbook writers, citing for example, "My heart's in a deadlock, I'd even face wedlock with you," from the song "What is There To Say?" In "It's Only a Paper Moon" Yip told us "It wouldn't be make-believe if you believed in me." Another global song.

A great deal of time could be spent writing about Yip's blossoming career, but there are plenty of good books to read like Harold Meyerson and Ernie Harburg's own, Who Put The Rainbow in The Wizard of Oz? Yip Harburg, Lyricist.

For the purposes of THE SONG, we go back to 1939 and MGM's attempt to trump (oops) Disney's success with Snow White and The Seven Dwarfs with L. Frank Baum's The Wizard of Oz. This full length, full color feature was a first of its kind and needed writers who could speak to kids and adults at the same time. Enter Yip. He had always had a sense of the whimsy in his work and when he read the book, fell in love with it. It certainly appealed to his playful nature and maybe even more unconsciously to his deep sense of political fairness.

The Wizard of Oz, with the oligarchic Wizard ruling behind a smoke screen and the rich characters all looking for something to complete them is a great metaphor for life...then and now. According to Ernie in an interview with Amy Goodman on Democracy Now, the "Wizard of Oz" was about common people confronting and finally overcoming oppression. He said that the Scarecrow represented the farmers, the Tin Man stood for factory workers, and the Munchkins of the "Lollipop Guild" were the union members. I asked him about the not so Cowardly Lion. He said he didn't have a historical reference for the big cat, but mentioned that The Harlem Rep will cast a woman in the role of the Lioness next year.

According to history Professor Quentin P. Taylor at Rogers State College, the entire Oz story is an allegory for the 1890's Populism and a satire on monetary reform. He cites Henry M. Littlefield in describing Baum's 'fairytale' as an understanding of the times and William Jennings Bryan. Bryan, from Nebraska, was the Democratic presidential candidate in 1896 and 1900. According to one theory, he was a stand-in for the Lion. He was cowardly in his opposition to the war in Spain and brave when he opted to take on the big trusts. The Lion in the Forest must do battle with the spider monsters who represented the huge corporations and trusts that were dominating economic life. Bryan tried to do battle with the gold and silver laws, but lost to McKinley.

But perhaps Baum was more of a satirist and not intentionally writing a parable about Populism and anti-Populism. Perhaps he could see all sides of the issues and was showing them to us through the filter of a children's tale. That may be true for Baum, but Yip Harburg's political consciousness and art were deliberate. The poetry is beautiful, and yet he is sharing real ideas about his troubled world. After all, his politics were so strong he became known as "the conscience of Broadway."

Yip had many musical successes but unfortunately was caught by the octopus trap of Republican Joe McCarthy where his talents had to be on hiatus for a decade. Blacklisting, a great stain in our country's history, destroyed many lives of people suspected of involvement or sympathy with the Communist Party. Harburg was banned from television and film work from 1951 to 1962, but he had never even uttered the word communist...he was a Socialist. Not until Bernie Sanders, had anyone recently (post-McCarthy) been brave enough to make that assertion publicly in this country. Ironically, CBS aired the Wizard of Oz film on the new "color TV" in the mid-1950s, breaking all viewership records and it continues to play every year.

Harburg wrote over 600 songs including the hit Broadway musical Finian's Rainbow. Its themes are those of racial bigotry, women's rights, anti-immigrant prejudice and mortgage foreclosures. Its cast was the most fully integrated for a Broadway musical up to that time and it remains a hit around the world today. Next, Francis Ford Coppola directed the film version in 1968 and the DVD still sells. So many of his songs deal with the universal hope for change and social justice for all people. Harburg was inducted into the Songwriters Hall of Fame in 1972 and in 2003 the rainbow song was named Number One Film Song of All Time by an American Film Institute Poll; in 2005 the United States Postal Service issued a commemorative stamp; then, in 2014 "Over the Rainbow" received the Songwriters Hall of Fame "Towering Song Award."

Not too shabby for a kid from the Lower East Side. He dared to dream and was able to fulfill it. In a country where one could try and make opportunity, no matter where they came from. And fight for the idea of social justice for all.

So back to Ernie and Hillary. Judy Collins once asked Yip what the song meant to him and, to loosely paraphrase, Yip said, "It's about a feisty little girl who takes down corrupt leaders," Dorothy does stand up to the hot-air humbug who is the "Wiz," and with the help of Toto, pulls down the curtain of bluffoonery and delusion, revealing him to be weak, protected by smoke and mirrors without much of a plan for the citizens of Oz. "I'm a very bad wizard" (like Hoover in 1930, Nixon in 1973, Bush in Iraq).

Let's listen to the verse:

When all the world is a hopeless jumble,
And the raindrops tumble all around
Heaven opens a magic lane ....

In Ernie's mind, that magic lane, that yellow brick road, that rainbow, leads directly to the voting booth where in this land of Oz, we still have the right to vote for whom we really believe cares for the health of the country and not just for themselves. For Ernie, Hillary is the feisty girl named Dorothy. The rest, including Trump, is all humbug.