San Francisco artist Bill Fontana is a sound sculptor. He uses audible, invisible, material to create forms, or dynamic drawings. Primary explorations revolve around ideas of time and place; a major interest for the artist is the hidden sounds of structures.

Fontana's current commission at SFMOMA, Sonic Shadows -- on play through October 16 of this year -- is the newest incarnation of his investigations, elegantly bringing to our attention the overlooked richness of our surroundings.

Here, for the first time in a Fontana work, we see some of the infrastructure of the piece (usually all of the mechanics are hidden): four ultrasonic speakers. These flat, white, square pieces of audio equipment--"They almost remind you of an empty white canvas," says Rudolf Frieling, SFMOMA's curator of media arts, who curated this piece -- rotate and undulate gracefully on pivot points, randomly directing laser-like beams of sound from the fifth-floor pedestrian bridge, which sits just under the museum's iconic circular skylight. The sound bounces off through the architecture, just one way the building contributes to the ongoing creation of the work.

"This has aspects of being a kinetic sculpture," says Fontana, "because you can see these things [the speakers] moving. It has a certain visual interaction with the space, which I've never done before." The speakers help give form to what isn't visible; we can better conceive of the sound's physicality. 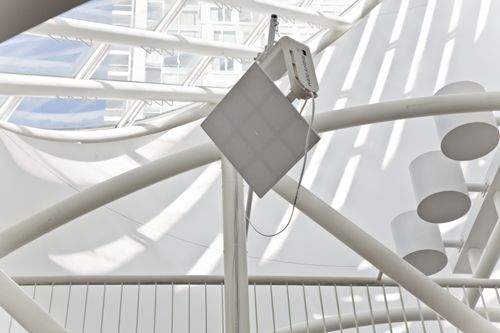 The audio that is projected originates from the within the museum. "This work creates a live composition generated by the building itself," says Frieling.

"Sonic Shadows reveals the internal resonance of structural elements, such as the fifth-floor bridge and boiler room pipes, transforming them into musical instruments. Fontana uses vibration sensors to create a real-time acoustic translation of the visible and invisible architectural space. As visitors cross the bridge, the vibrations of their footfalls contribute to the mix of found music. As such, Sonic Shadows depends on weather conditions, visitor flow, and other external factors, so it will always be different depending on the time of day, but it will also produce an enhanced experience of what a museum space can be -- a resonate body, reprogrammed through artistic visions." 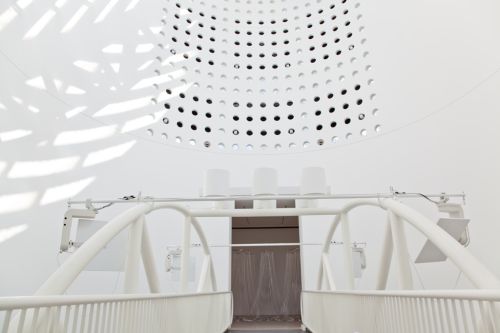 Use of ambient sounds to create compositions is an ongoing pursuit of Fontana's, since the mid-1960s. The use of a live feed here brings an immediacy to the work. It also pushes the exploration of environment as a musical composition source, an idea brought to the forefront in its most pristine form by John Cage in 1952, with his work 4'33" -- four minutes and thirty-three seconds of "silence." That piece, similar to Sonic Shadows, is about listening, completely; we are asked to reassess how we categorize and interpret the sounds around us. Fontana adds to that experience by not only piping in and altering the museum's internal sounds, but also by making audible the structure's vibrations.

"Sound art deals with people's perception of time," explains Fontana, "and one of the problems with coming into a museum like this is that you're going very quickly. What I want people to do here is stop and contemplate the space and take this in."

Sonic Shadows provides an enhanced way to engage in our environment, as well as highlights our impact as we move through it. Fontana makes it musical, if we stop and listen.