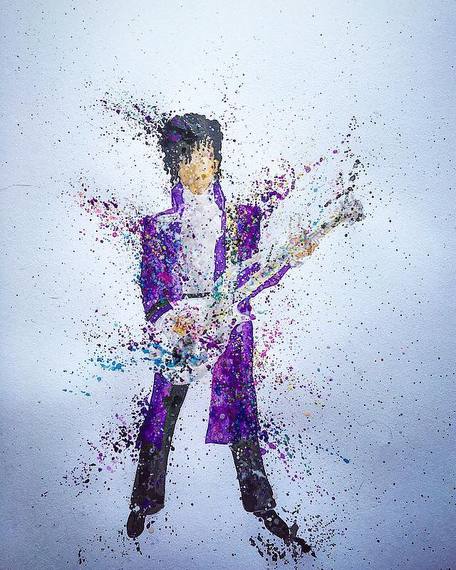 Some people make music that takes you deep into remembering and the healing found in those depths, and some people create music that helps you forget, losing yourself in the bliss of beats and movement and existing as a being fully present in those few minutes until the next great song plays. Prince was the soundtrack to decades of my joyful dancing, from the first record of his I owned Purple Rain to his work with the Revolution, the New Power Generation, as "The Artist Formerly Known As", and back to Prince again. For someone to whom happy moments have been few and far between, most of my happiest memories are dancing to Prince's music with my friends. I've even danced to Prince with my husband, who never dances. But when Prince comes on, he often gets up and grinds with me because PRINCE.

And can we please take a few moments to praise the sexiest superhero movie soundtrack of all time: the brilliance that is Prince's Batdance album? It's one of my all-time favorite albums not just of his, but of all the music I've ever loved, and flies under the radar amid so many amazing albums Prince brought into this world. Prince beautifully melds his own sexy funky style and Tim Burton's darkly comical vision of Batman, with so many glorious carnivalesque, comic book, and intertextual elements embedded in the music as well as the lyrics. The last few bars of "Arms of Orion" -- the Prince song that's been stuck in my head since I heard the news of his passing -- are a perfect example of the stylistically hybrid tunes Prince was mixing even before there was a name for it. Can we also raise our hands to praise the badassness that was Prince's Two-Face/Batman/Joker mash-up outfit he used to physical perfection in the "Batdance" video? Even now 27 years later that song and that performance give me chills. What a straight-up genius composer, and musician, and performance artist.

Unlike so many of his contemporaries, I always got the sense that Prince really loved and respected women, and he seemed to understand what makes us tick in a way that so many other male musicians haven't been able to capture. How else could he have written all those incredibly resonant songs for all those women to sing? Sheila E, Sheena Easton, Wendy & Lisa, Chaka Khan, The Bangles, Sinead O'Connor, Ani DiFranco and so many others in so many different styles took on Prince's words and music to make them wholly personal.

The fact that Prince made it a priority to mentor, support, and promote the careers of so many women over these past decades is another testament to what a giving creative soul he was, and a rock'n'roll feminist. I can't think of a single other male artist who gave legs up to as many women as Prince did, nor who boasted all-female bands like the Vulvalini-esque 3RDEYEGIRL. He was so ahead of his time it's profound to begin putting his life's work into this kind of perspective.

Like David Bowie, Prince's sparkling fabulousness transcended social and cultural norms -- especially in subverting notions of masculinity and its presentation -- in such unique ways, it's impossible to take a full measure of its and his depth and scope except to say that he was one of a kind and there'll never be another person who reaches the bar he raised. We had a purple unicorn living among us all this time, and damn straight we knew and worshiped him.

When I was 18 in 1997 and going off to college I decided to start using my first name instead of my middle name as I'd been called, and Prince's own name change was in the back of my mind when I went for it. We were both met with massive walls of resistance and tsunamis of disdain for wanting to be known as and called something different from what people knew or expected. So few decide to reinvent themselves on that fundamental a level, and so how could we expect others to understand why and how important it was for us? Nineteen years later and there are still people I marginally know who refuse to call me Sezín, they cannot cope with this kind of change or they don't respect me enough to honor my choices. When Larry King asked about his name change Prince said, "I had to search deep within my heart and spirit and I wanted to make a change, move to a new plateau in my life and one of the ways in which I did that was to change my name. It sort of divorced me from the past and all the hangups that go along with it." Amen, my soul brother in purple. Preach.

My husband and I were driving back home from our 10-year wedding anniversary honeymoon when we got the news Prince is no longer in the mortal coil, and we listened to the radio tributes on Sirius XM for the entire four-hour journey home. It's the first time I've ever been sad and cried listening to Prince's music. I had a chance to flip through so many vivid and wonderful memories of grand times I've spent with loved ones, some of whom are also no longer in physical form, and I've been awash with gratitude that Prince's music helped me share such happy moments that have stayed with me amid so much darkness. I wish I'd had a chance to see him live; what a life-changing experience that would have been.

Prince Rogers Nelson, you were not the soundtrack to my angst and identity issues like so many other beloved musicians: you were and will always be the soundtrack to my happiness. You gave me permission to be happy, even if it was just minutes at a time. Soon, these purple tears will pass and the doves will stop crying. Your music will remain as it always has been and will be, and I will keep doing my sexiest and happiest batdances in your honor. Rest well, sweet Prince. You're in the arms of Orion for real now, and I will always look for you up there.