A new South is emerging. Nowhere is it more evident than in the Carpet Capital of the World: Dalton, Georgia. According to the most recent census, Dalton is 48 percent Latino and 42 percent White. Those who have lived in the community for decades are quick to point out that just a generation ago, Dalton was almost all White. This small city in northwest Georgia, just a 40 minute drive from Chattanooga, is an example of what the integration of immigrants should look like in the South, and throughout the U.S. While it might not be perfect, the residents of Dalton are trying harder than most.

When you walk into the art class at the Morris Innovative High School in Dalton, it is impossible to miss the large mural on the wall. Painted by the students, it's a beautiful depiction of their life stories inspired by watching the film Documented, about the life of Pulitzer Prize-winning journalist and founder of Define American, Jose Antonio Vargas, who is undocumented. Unique, however, is the bold title: "Being a Latino/a in Dalton, Ga." It is remarkable, not because they are excluding non-Latinos, but because there aren't any non-Latino students in the class to exclude. 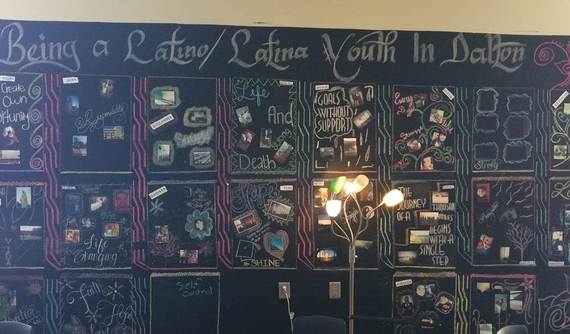 These recent demographic shifts in Dalton, now half Latino, place the heavily Christian community at a crossroads between their deep faith-- one that teaches them to "welcome the immigrant in their midst"-- and their more conservative political leanings. This isn't the first time Dalton has faced such a crossroads. In the decades that spanned the 1950's to 1970's, Dalton faced a similar influx as people from the surrounding Appalachian mountain counties moved into the city looking for work. They too brought somewhat different ways of doing things and, ironically, it is the children and grandchildren of these "immigrants" who now face the challenges of welcoming newcomers.

I recently met Maria Gonzalez, an undocumented Dalton resident, as she was sitting with her American children in the foyer of one of the community's largest, mostly-white churches. She told me she was planning to attend an event later where Jose Antonio Vargas was speaking about immigration, identity, and citizenship in America.

Since "driving while undocumented" is not allowed in Georgia, or neighboring Tennessee for that matter, I wanted to know if Maria did it. Like many undocumented Americans, Maria drives to get to work. Often her U.S. born children are in the car with her, but she has developed a strategy for coping with their anxiety in case she gets pulled over by the police: she has taught her kids not to cry.

The idea behind this is not because the children will give away her status, but because getting pulled over means that she will be deported, but they "don't have to worry because my church family will take care of you when I'm gone," she tells them.

Maria's entire life is consumed by the reality that she could be separated from her children-- possibly forever-- at any moment. Maria isn't the only one. In light of ongoing legal battles over the executive actions on immigration announced by President Obama late last year, five million undocumented immigrants, like Maria, remain fearful of deportation. Fear struck their hearts again, as the U.S. Court of Appeals for the Fifth Circuit's denied an emergency stay that would have offered them hope.

Whether the citizens of states like Georgia or Tennessee like it or not, millions of undocumented Americans drive every day. They do so because in many Southern communities there is limited public transportation. They drive for the same reasons other Americans do: to go to work, to visit the doctor, to see family, and to go to church.

One wouldn't think of Carpet City as being uniquely innovative. However, the community's response to the arrival of immigrants - undocumented and documented - is shining a bright new light on the entrepreneurial and compassionate spirit of Dalton.

One example is the public school system's "Newcomers Academy." Faced with a consistent influx of children, the system has dedicated a team of top-notch teachers specifically responsible for preparing migrant children to succeed in the larger education system. When I spoke to this group of "newcomers" one young student kept nodding off in the front row. The teacher later informed me that the student was working from 7 PM to 7 AM daily, then going to class, because a Coyote (someone who smuggles people across the southern border) was holding her extended family in Mexico hostage until she paid off the ransom.

That's certainly not the life I had as a sophomore in high school.

Like in Dalton, Southern communities in states like Georgia and Tennessee are facing a choice. How do they respond to those who come seeking refuge, who came to America for a better life?

Maria entrusts her church family with the lives of her children in the worst case scenario that she is deported. She sees her church as a support and feels welcome in its community.

The dedicated teachers in the Dalton school system are trying to do the same for their students. They are betting their own future, and that of the city they love, on the success of these newcomers.

How do we define American? Our brothers and sisters in Dalton, Georgia, might help us find the answer for a new generation in the South, and beyond.