I was raised in the A.M.E. Church or the African Methodist Episcopalian Church. The name alone implies togetherness even though the church was formed in strife as Africans were upset that Caucasians in the Methodist and Episcopalian churches refused to pray equally with African descendents. So, in Philadelphia the Africans formed their own church which had a simple mission of Christian liberation theology. For the oldest African-American church in the U.S., part of that liberation meant following Union troops to the south to open churches for newly freed slaves, as Confederate territory was taken over.

One tenet we learned in the church was the power of forgiveness. To forgive is not considered a weakness, but rather a powerful tool. Forgiving another person is taught as a self-liberating action that leaves the individual with spiritual and emotional space to continue to improve one's self. There is no room for hate in self improvement only love. Forgiveness does not let the perpetrators of hate off of the hook. It just means they alone are now wedded to their actions - not the forgiver. And one other thing, the forgiver forgives, but forgetting is another matter all together.

After the Civil War ended some wealthy and rather pissed southerners formed a movement known as the Redeemers and their motto was "The South Shall Rise Again." They meant it would rise for Caucasians. Well the south will never rise again as the Redeemers envisioned 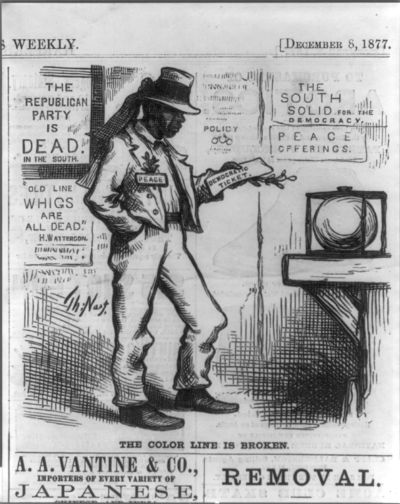 But I believe the South will rise again in a way that frees most Caucasians from intimidation by other Caucasians who are racist, ignorant and love to flash the rebel flag on any and everything, including taxpayer supported buildings. Everyone knows there are Caucasian Americans who want to speak up against the rebel flag, but do not out of fear of being ostracized by other Caucasians. They can't get a break. African-Americans look at them and wonder why don't you speak up and join us, but their peers say, "Stay with us." "Understand us." "We are having a cookout and you're invited, just bring your rebel flag." or "I know of a bar we can go to that has the flag on the wall."

That is a hell of a tight spot to be in. I can just see most Caucasians just waiting to exhale, but their true emotions are being held hostage by a small, strident group which is clutching onto a flag that represents rebellion against the higher ideals of this nation.
That same intimidation existed during the Civil Rights Movement. But many over-came and stood up for what was obviously a right and just cause.

The south will rise again to lead America along the path to improved race relations. If only Nixon could go to China, then solutions for our race problems will start - in the South, where basically they got started. And there will be plenty of Caucasians who will again join a good cause and take part in equal leadership.

Reasonable people know that we are all in this race quagmire together and togetherness is how we will get ourselves out. There will be no fantasies of a "white" Northwest bordering west at Idaho, Utah and Arizona. Ain't gonna happen. There will not be a "New Africa" for "blacks with Atlanta as the capital. Just ain't gonna happen. Give it up.

What we will have is what we already are. We are a people of many different cultures who decide to try to get along and live together for the sake of a greater cause, namely united states. There are many more of us than the knuckle-heads, both African-American and Caucasian, who prefer to embrace divisive symbols and practices. Just remember that we out number them.

For the sake of unity I prefer to practice forgiving as I was taught in the A.M.E. church. It is the same forgiveness displayed by the relatives of the victims killed in Mother Emanuel A.M.E. church. In order to forgive you have to release the hate and move on to higher ground. In no way will honest history be forgotten though. That, just ain't gonna happen.