On Oct. 4, 2013, Vanessa Fontaine's worst nightmare came to life. Despite having warned her autistic son Avonte's school that he was prone to wandering, he ran right out the door of his classroom -- past cameras and a security guard -- and vanished.

His remains washed up on the beach three months later. 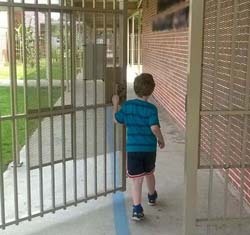 In May 2014 a 9-year-old autistic child from Bellevue, Nebraska, left school -- unnoticed -- and surprised and frightened his mother by walking in the door and asking for a snack. Her son functions at the level of a 5-year-old and crossed two busy streets to get home, with no understanding of how to do so safely.

Again, in May 2014, another 9-year-old child on the autism spectrum left his Oakland Park, Florida, school early and walked 12 blocks home. He was found trying to get into his home through a window and later described chatting with a complete stranger along the way.

These aren't the only incidents of autistic children wandering from school (commonly referred to as "elopement"). Following elopement incidents, we usually hear school districts "express concern" and pledge to "work with parents to ensure their child's future safety." I'm sure they mean it and will probably try. But what do they say to Vanessa Fontaine? Her son's school can't work with her now.

Most school districts do not have an elopement protocol. I can assert this as both a public-school educator of 18 years and as an autism-parent advocate. If you Google "school autism elopement plan," the first one you'll come up with is the original version of this one on my own blog. Schools typically address autistic elopement only in the context of a specific child in an IEP meeting -- if they address it at all. And it's not because they can't afford to make such a plan; an effective protocol like the one I will propose here is mostly free. The reason schools don't have one is simple: They don't realize they need it.

In the past, most autistic students would have attended exceptional-education schools. Such schools usually have experience with elopement. But mainstream schools often do not. With the advent of inclusion in American education, autistic students now attend class with typical peers. However, these students do not always have needed support. Staff rarely receive autism-specific training. Human beings make mistakes. Doors get left open. And, in the chaos and panic of discovering a child is missing, bad split-second decisions are made in the absence of an effective plan.

Today, one in 68 children is diagnosed with autism. Statistically, half of them will elope, and more than a third cannot effectively communicate their name, address, or phone number. (An even higher percentage will struggle with communication beyond this.) And autistic children are often drawn to water. Of the children who are found dead as a result of elopement, 91 percent will be found in water.

If a school district's plan to address autistic elopement is merely to wait for it to happen and call police, they are planning for tragedy.

After consulting with both local law enforcement and Jerry Turning of Police and Autism: Bridging the Gap, here's a protocol I'm suggesting to my child's school district. I'm calling it the SPECTRUM Alert for Schools. It's important to note that this alert/code will necessarily look different for each school. To be effective, it must be planned by individual schools based upon their location, size, design, proximity to water, etc. The SPECTRUM Alert is not a ready-made plan but a roadmap for designing one.

S (Search grid): In conjunction with law enforcement, the school and surrounding community should be mapped out on a search grid. If the school is fenced in, there should be a perimeter walk to determine any areas vulnerable to elopement. From there, the grid should expand outward, taking into account any and all bodies of water, intersections, train stations, parks, playgrounds, etc. Staff should have already practiced reporting to their assigned search areas. Note: Water should always be searched first.

P (Pre-identification):
Each child prone to elopement should have on file a quick-reference sheet. This should be compiled by the school with the assistance of parents and possibly personnel who have worked with the child previously. It should contain the following information:

E (Law Enforcement liaison): One person's job should be to call law enforcement immediately. This person should also contact parents immediately. The liaison could then activate a "phone tree" already created by parents. That phone tree might include family and friends willing to assist a search. The child is likely to know them and may respond to them more easily.

C (Code): All schools have alert codes. Everyone knows how to respond to each code. A code should be called on the intercom. Teachers should be instructed to quickly look into the hallway and out windows and alert the office if they see the child in question. In upper grades, it might also be possible to have students assist in a search on school grounds in teams.

T (Training): All school personnel and school-resource officers should receive training in autism. Training can often ward off elopement incidents to begin with. Training should include information in sensory-integration disorder, social difficulties, literal thinking, triggers for meltdowns and elopement, law-enforcement considerations, food aversions, bullying and autism, and self-stimulation. It's wise to consult an organization like CARD and a behavior analyst in planning this training. A 15-minute after-school meeting won't suffice.

R (Relationships): Police should be encouraged to develop positive relationships with autistic students, who are often very literal in their thinking and may fear police based upon what they may have seen on TV. Classroom visits in non-emergency situations should occur so that in an emergency, these students will not fear police and jeopardize their recovery.

U (Understanding): Common triggers that distress autistic children should be understood by all staff, including substitutes and volunteers. By stressing the understanding component of this plan, schools can often avoid situations that might prompt an autistic student to elope from school. Because special events in gyms, auditoriums, and cafeterias are often painful to the senses of autistic students, there should be a plan to avoid subjecting them to trauma. This component is the most powerful part of this plan, though it's the least understood. Effective training can make elopement not happen.

M (Media): Radio, television, and social media are powerful when it comes to locating missing children. A media strategy should be considered by the school district and law enforcement.

Ideally, the SPECTRUM Alert won't be confined to the school. Police could enhance this system by allowing families to pre-register a child with the department in the event of a wandering incident outside school. It might even be possible for police to team up with the school district to utilize school personnel to assist in autism-awareness training in their own department.

The SPECTRUM Alert protocol would cost a school district little money. Most of it involves planning with personnel already on the payroll. It's simply a matter of a school making the choice to plan for an elopement incident and putting it into practice.

Human beings are by nature inherently optimistic creatures. We tend to go through life not prepared for the worst, out of a self-protective need to believe it won't. But schools cannot afford to do this with regard to autistic elopement -- any more than we can afford to not prepare for fires, tornadoes, or armed intruders on campus. Educators are in loco parentis. It's the Prime Directive for our profession to do for our students what we would do for our own children, including the most vulnerable ones -- like mine.

It's time for every school district in this country, without delay, to adopt a SPECTRUM Alert for Schools.