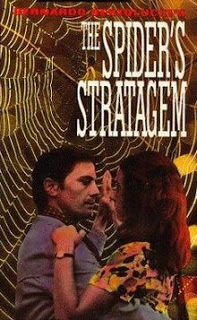 The sacrifice at the heart of Bernardo Bertolucci's The Spider's Stratagem (1970), which was recently revived at Anthology Film Archives, is that of life for the sake of art; it's refreshing at a time where the high volume of political discourse is wiping the subtlties of creative vision off the map. In the movie Athos Magnani (Guilio Brogi) the son of an anti-fascist hero, returns to the tiny backwater where his father's statue commemorates his heroism. The father has supposedly been killed in an assassination attempt on Mussolini who had visited the local opera house to attend a performance of Rigoletto. The son is actually the doppleganger of his father, sharing both his looks and name. He also shares his father perverse interest in defying preconception and making reality into an artwork. Our hero muses, "Here you find that whatever you decide to do has been foreseen by others." To understand the so-called plot (based on a Borges short story), you may want to speculate that Magnani senior may have become a collaborator less out of any political about face but for the sake of choreographing his own murder in the company of literary figures like Julius Caesar and Macbeth. But ultimately the motive (did Athos become a turncoat for art or life?) is as ambiguous as the fate of the son who ends up trapped in the web of artifice and myth that his father has weaved. Remember that Daedalus (and by proxy Icarus) was trapped in a Labyrinth of his own making. It's not Bertolucci's greatest work but if nothing else the movie makes one nostalgic for a time when filmic truth ("cinema is truth at 24 frames a second," Godard once said) could offer an alternative to the claustrophobic categories of political discourse.