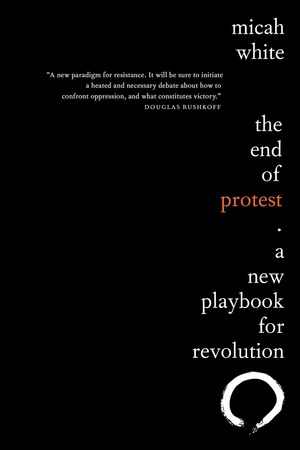 "People can't ignore my book," says Dr. Micah White, PhD. Well, people can, but once they've read the award-winning activist's innovative call-to-arms The End of Protest: A New Playbook for Revolution, they won't want to.

Part manifesto, part memoir, and part history of activism, The End of Protest is a radical document in every sense of the word. The comprehensive work explains White's belief that protest is fundamentally broken within modern society, and new paradigms are needed for progress to continue. This may surprise those familiar with White's role as co-creator of Occupy Wall Street, a movement he proposed to Adbusters magazine founder Kalle Lasn in summer 2011 while working as an editor for the anarchist publication. Initially protesting the unequal distribution of wealth in the United States, Occupy spread to 82 countries at its height before eventually splintering and shutting down in late 2012. Today Micah considers the movement a "constructive failure." In his new book he explores Occupy's significance and repercussions, examining why it's not just certain statements or actions that cause revolutions to succeed, but the thought we put into them.

Revolution, White notes, "is integral to the process of human civilization, society changing the way it organizes itself and the way it behaves. That's a very painful process that can only happen in moments of collective awakening... [But] for me, the most important thing is that activism needs to be more sophisticated in the way it thinks about what it's doing."

The latter statement is the heart of White's thesis, as The End of Protest encompasses so much more than reflections on a controversial movement. It's a critical analysis of historical tactics with examples going back to ancient Greece and Rome. It's a blueprint of eight basic principles for revolutionary change (including the idea that protests should be designed to succeed either within 28 days or 100 years, otherwise they fail). It's an expression of some decidedly radical proposals to galvanize our government (Micah wants to see a World Party created and rural areas to reclaim power from urban centers). There's plenty in this book for someone falling anywhere on the political spectrum to disagree with, but The End of Protest is crammed so full of fascinating research, stunning language, and spirited optimism that it's bound to make you stop and think.

Personally, I found White's section on "a unifying theory of revolution" to be the most illuminating. As a liberal who'd been more disparaging of Occupy than supportive of it, I doubted White's arguments would cut much ice with me... until he discussed these four schools of thought comprising modern protest. According to Micah, activism is most successful when all four tenets -- voluntarism, structuralism, subjectivism, and theurgism -- work in tandem:

Times change and so too does the revolutionary theory appropriate to your era. The way you protested effectively yesterday may not be effective in a week. Likewise, any true theory will not remain effective forever. Thus, all four quadrants are true, to varying degrees, at all times. The challenge is not to limit yourself to one quadrant. Instead, the goal is to ascend from material to spiritual and internal to external, attaining an understanding of each theory and a sense of when each is most appropriate. [74]

"Most of contemporary activism is voluntarism," he continues. Voluntarism means focusing on human actions -- getting people out into the streets to effect change. But there's also structuralism, the theory that activism stems from fluctuations in economic or political systems rather than individual protests; subjectivism, which depends on epiphanies via mental enlightenment and messages spread through social networks (as Occupy's influence expanded with hashtags and well-timed Tweets); and theurgism, which places responsibility on the supernatural.

Yes, that's right. Protest has a spiritual component, and White has incredibly compelling reasons for why we should believe in magic.

One way I try to think about it is, the insurance industry talks about "acts of God." They don't insure you if God creates a freak weather storm that just destroys your travel plans. But it's the same with the movement. Movements and political destinies are also influenced by acts of God that are unpredictable, that are outside of human agency... I think that people are yearning for a spiritual-political synergy. [It feels] like everyone secretly wishes there was a spiritual side to activism, because it actually already exists.

When I meet White, he's highly energized as he speaks about every major point in The End of Protest -- revolution is necessary for human advancement, those who desire social change must take more risks and try new tactics when they challenge the status quo, sovereignty must be given to the people. The words "strategic necessity" become the catchphrase of our interview; White is both passionate and genuinely serious in his mission. But it's when we discuss divine intervention as change agent that Micah's positive hopes for humanity really emerge.

"Occupy was a spiritual experience," he recalls.

It was something we talked about openly at that time... People would walk by the encampments and they would look in and then they would just be drawn into this interesting experience and get this feeling of collectiveness. And that's one of the reasons we're limiting ourselves by not discussing the possibility of [theurgism]. The process of social movement creation isn't strictly materialist; there's something potentially magical about it.

If this sounds a little too New Age for some readers, you can just skip to the parts of the book where White talks politics and Clausewitzian warfare, but the author would urge you to go all in:

The longer I listen to White, the more I have to admire his conviction. He may argue that protest is broken and America corrupted by consumerism, but he has more faith in humanity than most patriotic conservatives. I'm also intrigued by Micah's support for gender parity and his claim that women will be the leaders of the next great revolutions. (Seeing leadership demographics match the world's actual gender ratios would definitely be a welcome change.) Bottom line: Anarchist rhetoric and all, this is a guy who truly believes people can come together to make the world a better place.

But how does one get there without being a radical? What if, I ask White, you want to be a force for good but disagree with disruptive "Occupying" tactics?

"This is why the unified theory is so important to me," Micah concludes.

Activism needs to involve a whole spectrum of understanding about how social change happens. Only one corner of that spectrum is going into the streets and doing those kinds of events. But the other options -- meditation and rituals and prayer, the idea that "I should wait for that moment of economic crisis" -- those also free us to be activists in our own way. The most revolutionary action that people do is when they start to follow their dreams and passions instead of living the life that they think they should live out of fear. Living our truly authentic lives for once -- that's what I think is essentially activist.

I've never thought of myself as an activist, but just like Micah White, I do trust in the power of human harmony. Maybe he's right. Maybe in a world where most people seem to grow ever jaded and vindictive, the most impactful step we can take is to accentuate the positive. Happiness isn't the sole property of the Left or Right; it belongs to everybody. And if we could spark one major revolution over its pursuit -- well, perhaps the universe could stand a few more.

--
The End of Protest is now available from Knopf Canada. For more about Micah White, visit micahmwhite.com and the book's companion site.