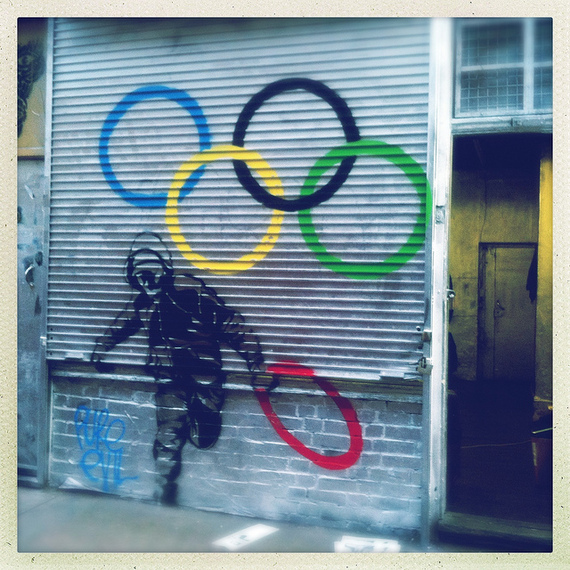 You're not to be blamed if you've lost faith. I'm not going to blame you.

I mean, have you seen the evidence lately? It's enough to make you give up religion and sports altogether, to renounce any and all devotion to God/Goddess and/or Michael Phelps.

If you're a person of faith you have no shortage of historical and contemporary evidence of the fallacy of having any kind of religious faith, wrapped as it is seemingly inexorably in a trail of damn near inconceivable violence and destruction. There's crucifixions, lynching trees, and Inquisitions. The Divine Will used to justify pogroms and final solutions. Crusade upon crusade upon crusade. The circle of violence and siege between our Israeli and Palestinian brothers and sisters. The global jihad of Islamic terrorism against Muslims and non-Muslims alike. The centuries of conflict between Hindus and Muslims in India. The structural violence of caste Hindus against Dalits and other "untouchables." Buddhists against the Rohingya in Myanmar. Evangelical Christians bombing abortion clinics and treating LGBTQ peoples as immoral monsters. etc, etc.

If you're a sports fan you have no shortage of historical and contemporary evidence of the fallacy of your devotion, wrapped as it is seemingly inexorably in a train of damn near inconceivable corruption and exploitation. You have the global gangsters of FIFA and the IOC. The fallen stardom of Lance Armstrong, Marian Jones, Barry Bonds, and Alex Rodriguez, among many others, in the complex ethical haze of performance-enhancing drugs. The weekend tradition of American football players quite literally bashing their brains in, and the fact that something as seemingly innocent as women's gymnastics might be and is even worse than the violence of the NFL. You have World Cups being built on the back of virtual slave labor, with estimates of thousands of migrant laborers dying in construction for the 2022 World Cup and other related construction in Qatar.

What to speak of the ongoing Rio Olympics, and the literal shitstorm which has come along with it. There's not shortage of hot takes that the Olympics themselves, as a concept and reality, has no constructive function for human society and should be banned.

Atheism in relation to religion and/or sports is quite a robust phenomenon, and the immensity of the evidence for this atheism, of which I've only given a dabbling of here, seems fully justifiable and incorruptible. To be a full-blooded cynic of the structures of global religion and sports is a very honest ethical position to take. It doesn't take much to think of the body of faith for religion and sports to be a corpse rotting away, and not quickly enough.

Yet, and I speak for myself here, and I imagine for many others, we carry a healthy dose of cynicism and wokefulness in relation to the hypocrisy, corruption, and violence of religion and sports, yet we don't give in completely to this cynicism.

It feels icky and hypocritical to believe, to keep watch, and these feelings are real, no doubt. Yet there is faith in something real, something pure, something which represents the divinity in humanity, which keeps us present and which keeps us from diving into the full well of the cynical which seems like a fresh bath but which ultimately doesn't provide the ultimate clarity and nourishment we inherently seek.

What exactly is the substance of the spirit of our faith? Why do we cling to something as irrational as faith in the face of the rational, visceral reality of so much suffering, corruption, and violence? These are some of the fundamental questions of theodicy, of how faith can be justified and experienced in contrast and concert with the overwhelming penetration and presence of evil in our existential and social realities. How can we believe in an all-loving, all-knowing Divinity in a world where, as Ivan so clearly calls out, the innocence of the child is abused, exploited, and corrupted?

As a student at Union Theological Seminary, I had the immense good fortune of being a student in Dr. James Cone's seminar God, Suffering, and the Human Being. We read everything from Augustine to Elie Weisel to The Brothers Karamazov to Victor Frankl. It was and is the most difficult, heart-rending experience I've ever had in a classroom. Many times I was simply struck dumb, especially when challenging questions were sent in my direction, from people asking me, for example, what I meant when I said suffering had meaning for those suffering the suffering inflicted upon them.

Dr. Cone certainly didn't set up the course in such a way that any of us had any expectations that we would solve the fundamental question of theodicy, of why there is such immense and horrific suffering under the watch of an all-loving God. To think one found any kind of easy or definite answer to the question of theodicy was to fail not only in matters of logic and reason but more importantly in matters of compassion. Yet, one has to answer, one has to respond. One could not face down the presence of evil with a completely cynical guise. In fact, the presence of evil feeds upon such cynicism.

This is where faith and hope enters, in the spirit of vulnerability and humility. Let me share a brief excerpt from a reflection I wrote during our God, Suffering, and the Human Being seminar which I think might fit here:

In this vulnerability and humility I find myself most identifying with Alyosha in the condemning gaze of Ivan in Dostoevsky's The Brothers Karamazov...Ivan quite convincingly explains to Alyosha, through his disturbing explication of the ultra-violent suffering of innocent children, why faith in God and Jesus is absurd and obscene. Alyosha does not protest with reason and philosophy and theology to Ivan's impassioned demands. He simply protests from the ground of love which is the substance of our spiritual core, beseeching to Ivan about the "the sticky leaf-buds, and the beloved tombs, and the blue sky, and the woman you love? How are you going to live, what are you going to love them with?...With a hell like that in your breast and your head, is it possible? No, of course you're going to join them...and if you don't, you'll kill yourself, you won't be able to endure...how will you escape? With what means will you escape? With your ideas it's impossible."

Alyosha's true response is his kiss upon Ivan, the same kiss of the seemingly risen Jesus upon the Grand Inquisitor, which represents the trans-rational, absurd, paradoxical, and even obscene response to the reality of suffering, the response where the presence of radical and revolutionary love sits, the same radical and revolutionary love of the gospel of Christ and the mystery of the cross. I identify with Alyosha here because his passion is no less intense that the righteous indignation of Ivan, yet his passion is the passion that endures. Alyosha's passion is no less intense because it is grounded in the most emancipating and enlivening of our values, which is the ground of common-sense, embodied compassion, the touching and sharing and healing of our fellow planetary beings.

The cynical lens is certainly necessary in our day-to-day, lest we become, or continue to be, hopelessly naive. But at some point, there has to be something different, something more, that just cynicism. Cynicism allows us to not be fooled, to see and understand clearly the problems within the institutions of sport and faith, to see what pockmarks and poisons the bodies of sport and faith. Yet cynicism alone, if taken to a reductionistic conclusion, is itself a poison which cannot heal the poison that affects that which we love the most.

To keep faith and to keep watch is necessary if we are going to fight for what we believe in. The cynics may wish for a world is which there are no grand institutions of sports and faith. That may even be desirable. But sports and faith are never actually going away. For us devotees, we need, as Coach Taylor says, "clear eyes and full hearts" to stand for and to represent and to call up what we believe is the presence of the Divine in the bodies of sport and faith.

When we watch the beauty of the body of the spirit of sport in dance and form in people like Simone Biles, Katie Ledecky, Usain Bolt, Lionel Messi, and so many others, we witness and participate in something which represents the best of humanity. Sure, to run fast or to dazzle on the football field may not quite mimic the pure devotion of a St. Francis or a Mirabai but it is of the same substance. I'll continue watching the Olympics with a kind of simple joy and awe which I never want to give up, even while trying to understand more and more the corruption behind the mask and how we must fight that corruption. You can call that naive. I'm just trying to keep the faith.