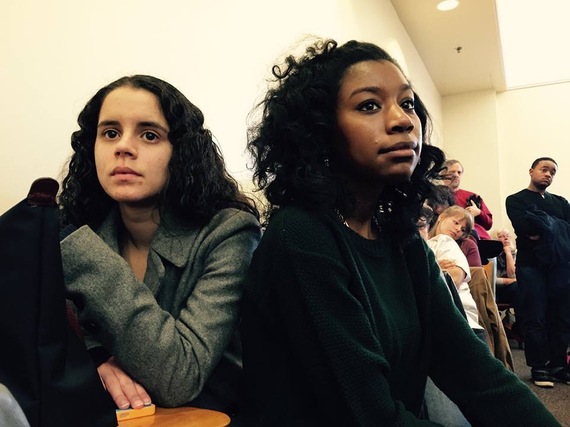 Earlier in the afternoon, over twenty undocumented youth and thirty documented student allies attended a teach-in in the same classroom to learn more about past civil rights struggles and to call attention to Georgia's discriminatory policies that ban undocumented students from attending the state's five top public universities. Organizers posted a sign on the classroom door that read "Desegregation in Progress." But at 5 pm, when the building was set to close, the students refused to leave, announcing that they would stay to protest discriminatory educational practices "in the spirit of this historic date" and to honor the African-American students who had desegregated the University of Georgia 54 years ago. 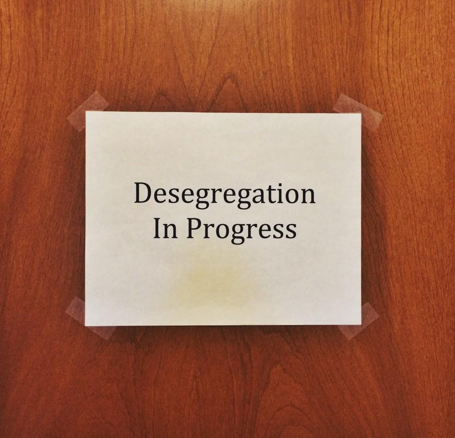 Four of the arrested youth are undocumented, and the remaining five are documented students who attend the University of Georgia and Kennesaw State University. Georgia's estimated 400,000 unauthorized immigrants are critical members of one of the largest Latino populations in the U.S. South. Undocumented students and their allies have put significant pressure on policymakers to end the ban on undocumented college attendance since the Board of Regents instituted its policies in 2011. Emory University student Malik Alexander explained that in his view "taking away education based on documentation status is just another from of systematic oppression. It echoes Jim Crow racial segregation and all other types of 'legal' discrimination, but this time towards a different racial minority than America is used to confronting."

Students had timed their teach-in to coincide with the 54th anniversary of the integration of the University of Georgia by African-American students, an important milestone in the civil rights movement when, on January 9, 1961, Charlayne Hunter-Gault and Hamilton Holmes became the first to successfully desegregate a public university in the Deep South. These young students see their own struggles today as an extension of earlier democratic movements in the region. "We are holding this protest to honor the legacy of the brave students who came before us," student Sergio Delgadillo noted, "and to highlight modern forms of segregation under Georgia's current ban against undocumented students." Valentina Emilia García called Friday's occupation and integrated classroom "minute compared to the big things students did in the civil rights era" and admitted that "it excites me to know that I am making history." 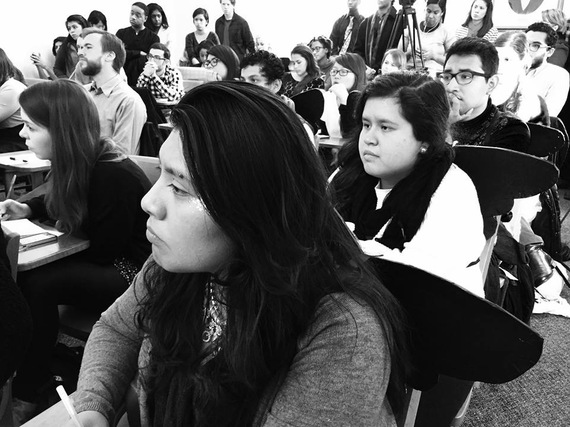 To learn from earlier civil rights efforts in the South, organizers of the integrated classroom invited Lonnie C. King, the founding chairman of the Atlanta Student Movement in 1960, and Loretta Ross, a leading figure in the reproductive justice movement, to address the youth activists who gathered Friday. Most attendees already knew that other African-American leaders such as U.S. Rep. John Lewis (D-Georgia) -- one of the heroes of Selma -- have been staunch allies of the undocumented student movement, but they wanted to hear from experienced guides such as King and Ross to better understand their state's history and its ongoing challenges. 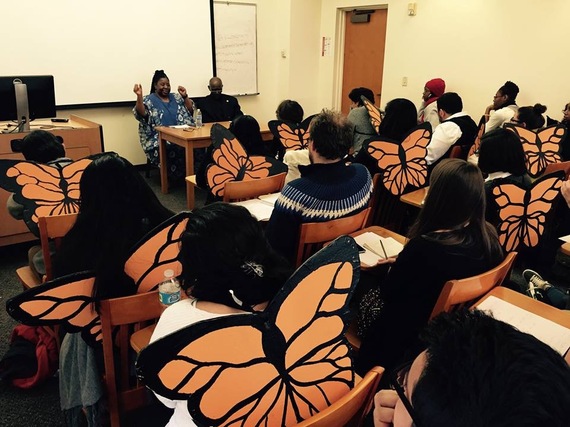 Excitement ran high during the afternoon class. Students shared ideas and insights with one another. Attendees tweeted using hashtags such as #educationnotsegregation, #54yearslater, and #migrationisbeautiful. Speakers offered stories about their struggles old and new, and they praised recent efforts by undocumented students to make allies, to create opportunities for their communities, and to change public policies. Lonnie C. King urged immigrant rights activists to "run the leg of freedom -- which is a relay -- as fast as you can when it's your turn to carry the baton," and to remember that "you have to be willing to be a troublemaker for justice if you want to change anything." Loretta Ross told them that "my first radical act was my parents and I fighting for my right to an education," and she called the students' efforts "radical and revolutionary." 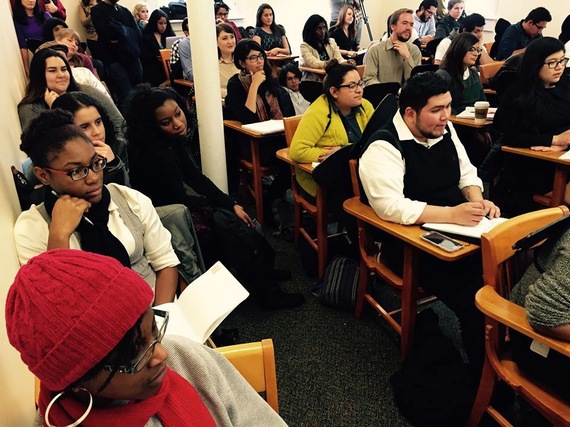 As the afternoon progressed, young people promised that they would continue to work hard to open the doors of Georgia's colleges and universities to all qualified residents of the state. Many proudly wore handmade butterfly wings in the classroom to celebrate their families' migrations. "Migration is beautiful," they wrote. Some criticized Georgia's education establishment directly. As Kevin Ruiz, one of the arrestees and a member of UGA's Undocumented Student Alliance, said, "I am ashamed that my university denies admission to fully qualified, equally passionate students based on how they came to the United States as children."

The student organizers have learned about African-American and Latino histories at Freedom University, an Atlanta-based institution for undocumented young people that was inspired by Southern "Freedom Schools" for African Americans in earlier decades. For the last four years, Freedom University -- known to supporters as "FU Georgia" -- has provided a tuition-free education to undocumented students and helped many young people apply to out-of-state colleges and universities. And in the process, its staff has taught Latino students about local African-American political struggles.

The organization's staff had emphasized in advance of Friday's events that student leaders must understand how they fit into their state's history. In the words of Executive Director Dr. Laura Emiko Soltis, "Freedom University students know that education is their human right. This makes them unstoppable, and with documented student allies throughout Georgia, they are carrying on the long tradition of student freedom fighters in the South, and they will win." Buoyed by "learning about sit-ins, bus boycotts, and student protests," youth leaders like Ashley Rivas-Triana are convinced that they have a lot to contribute to struggles for equality in the state. "You're the ones we've been waiting for," Loretta Ross told the students near the end of the class.

When undocumented youth and their allies decided that they would not leave their integrated classroom when the university building closed Friday at 5pm, choosing instead to wait and demand an end to Georgia's discriminatory policies, they knew that they risked arrest. Six police cars arrived by 8pm to arrest the protesters on charges of criminal trespassing. Neither President Morehead nor the regents have responded to their demands. So in a scene that brought together past and present, officers handcuffed and arrested nine young students, many wearing butterfly wings, into nearby police cars. 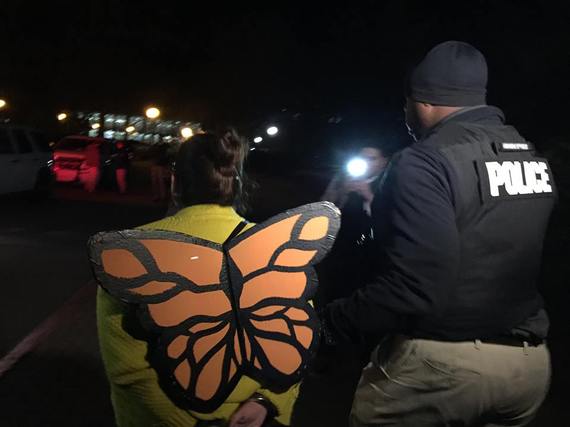 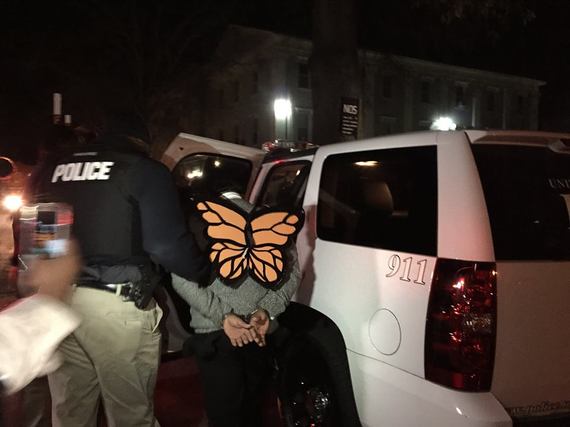 Professor of American Studies and History; Director of the Ethnicity, Race, and Migration Program, Yale University