On a call with director Jehane Noujaim and producer Karim Amer last month, Noujaim described what drives her to make films. "When I experience magic, or a person who completely inspires me, I immediately want to share it with the world."

It is these people's stories, and Noujaim's passion for bringing them forward, that allows history to speak through the film, unbound by time, rising above Tahrir Square, to reflect not only on the future of that country, but on the process of social change anywhere. As Amer states, "This is a film that's not just about Egyptians; this is a film about a human struggle."

The Square is and will remain important for anyone who is a student of social change, human rights movements, and democratic processes for years to come. It is important not because it gives us answers, but because it poses questions through the experiences of people grappling with the ups and downs of change, the surges and ebb tides encountered on the long road to freedom.

The film follows Ahmed, Magdy, Khalid, Ragia, Ramy, and others through the excitement of the initial protests, the euphoria of Hosni Mubarak's downfall, the election win by the Muslim Brotherhood, and Mohamed Morsi's subsequent dictatorial power grab, new protests, the Rabaa massacre, military rule, and onward through July 2013.

Now, as the film hits theaters just as Egypt is reveling in its new Constitutional referendum, The Square leaves its viewers asking what will happen to Magdy with the Brotherhood outlawed, and wondering about the youth who were in Tahrir Square from the beginning but boycotted the vote, feeling excluded from the very changes they set in motion.

Since the release, Noujaim and Amer have received countless tweets from people across the world saying they hadn't followed the Egyptian revolution with great interest, until now. Through the film's portraits of individuals, an international audience is contemplating what it takes to create change, what one must sacrifice, for how long, and what a true commitment to one's fellow citizens, even those with whom one may disagree, means.

The Square presents a complex perspective of change, one that is grounded in compassion and realism, and prepared for the long haul. Noujaim says, "I feel like this film has given some kind of hope when there hasn't felt like there is any hope. The civil rights struggle [in the U.S.] took such a long time. Struggles around the world have taken such a long time."

This is why The Square is an important film-- not just about Egypt, but about freedom movements and social change for an entire generation. To suggest that it merely chronicles an isolated national revolution would be ignorant. The film is part of a moving conversation that is being held in common by youth across the planet who perceive their struggles are interconnected.

Many of us working on the build-up to the Egyptian and Tunisian revolutions before they began believed that ultimately national movements for change would not be enough, that change anywhere could only come from change everywhere. We knew an Arab Spring could never succeed in and of itself. We knew we needed a global spring, and were writing about this, myself included, from the first days of the revolution.

But to create a global movement means connecting a global community in a shared discussion. The Square succeeds in doing this by luring us into personal stories that soar above the entrenched and myopic views of those who think that the chief question is whether the military or Muslim brotherhood is trying to hijack the revolution. While this is a valid question, it only imagines the notion of freedom from within the confines of a cage that has already been broken.

Like journalists who continue to paint The Egyptian revolution as merely concerning Egypt and the 'Arab Spring' as merely something in the Middle East, anyone who thinks The Square is only concerned with a national struggle for change is completely out of touch with a generation that is conversing and organizing across boundaries.

When I asked Noujaim and Amer if they hoped that the film might spark renewed hope for movements worldwide as well as in Egypt, Amer responded, "There is a universal struggle here, and the sooner we start to have that uniform conversation that includes stories, narratives about people fighting for change all over the world, the sooner we can start to learn from the successes and failures of each other, and the sooner we can start to build an international constituency supporting these movements."

This is why The Square is so important - not because it tells us what happened and what didn't happen, or who is and isn't right, but because it listens to people. It opens a discussion, and it challenges us to consider what does and doesn't work, wherever we are.

Only fools question whether the Egyptian revolution was a success or failure. The reality is a shift in consciousness has taken root not only in Egypt, but across the world. As Ahmed Hassan observes near the close of the film, whereas before the revolution one could not risk sharing political views with a cab driver, today "the children are singing protest songs in the street."

Go see The Square and be inspired.

Stephan Said is a musician and activist and founder of difrent:, a production company telling the stories of youth making change across the planet. He has appeared in The New York Times, TIME, The New Yorker, The Guardian, NBC, NPR, PRI and more. He lives in New York City.

Stephan Said
Musician; Activist; Founder, difrent:
This Blogger's Books and Other Items from... 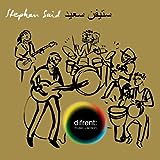