Is it leaking? Things are getting damp. But that could be because I’ve been running these meetings all day and the room is warm so it could just be sweat. It’s not like I’m going to be able to air it out so now I have a sweaty vagina for the rest of the day. I’ll just swing by the bathroom aaaaaaand of course there’s a line. I’ll try the one on the third floor. That one is usually pretty remote.

Good. No one is here. Except it’s really echoey and my leggings always get caught on the toilet seat when I get up and it makes a huge noise and now I worry my coworkers think I’m someone who doesn’t know how to use a bathroom. Or is a stealthy bathroom abuser. You’re overthinking this. No one is sitting around judging the noise you make in the bathroom. Probably.

Maybe that’s why everyone has been so nice to you lately. They think you can’t figure out how to use the bathroom without knocking everything over.

That’s ridiculous. Now just go check your underwear so you can move on.

Yep. We’ve reached leaking. The toilet paper proves this. Time to start looking through every single cabinet for a spare tampon. Of course there aren’t any. And my bag is in the coat room far from the bathrooms. And I didn’t bring any extras because I switched purses because it’s been raining and my other purse needed to dry. I should stop calling it a purse; it’s a tote bag from a conference that I worked. Sigh. And there is only one stall and it’s always precarious to get back here. Okay. Time to line my underwear with single ply toilet paper and these industrial paper towels that absorb nothing but push fluids around and then not sit too much.

I am standing at my desk because I’m in a skirt and if I sit I’ll bleed through. So I’m just going to hop from one foot to the other in the hopes that the blood just lines my thighs and cannot be seen by other people. It’s like high school all over again. This is also really fun because my back hurts from cramps. I’m just going to lean against the desk at an angle. Wait, no, can’t do that. Gravity is such that if there are, god forbid, any stray drippings they will land on the floor instead of my legs. I guess I’m glad for my thick thighs for once. More surface area to contain the flood.

I just sneezed and I felt a gush. I hope this toilet paper situation works because it’s starting to chafe. It’s like sitting on a compact rod that may or may not absorb the ocean currently burbling out of my uterus. It’s also really hot so if I didn’t have a sweaty vulva before, it now looks like my vag has taken a lunchtime jog.

Fuck, I walked to work today. I have to walk all the way home with red, slippery thighs that hopefully won’t drip into my socks. Fuck.

Welp, I went to the bathroom to change my Civil War bandages and then had to poop. The process has resulted in my tampon shooting out of my vagina. I don’t even have a finger in the dyke and we aren’t supposed to flush tampons because they are bad for the plumbing.

Yeah, I’m not fishing that out. Flushing. Now when the plumbing explodes and the whales die it will be all my fault. Also, it will now be painfully obvious that I am the Office Pooper. Glad my 90 days are up. Pretty sure that’s a fire-able offense.

It’s all over my fingers and I’ve managed to get it on the sink, the toilet, and the wall. Fuck. Now I guess I’m cleaning the entire bathroom so it won’t look like a crime scene.

I wonder if I can get Postmates to deliver tampons to me at work?

$45, eat me. I’ll go economic with more of this toilet bark we have at work. Sure, my asshole is in tatters but it’s working so far.

Four more hours to go and you don’t even have a tampon in to block all this. Where is a Little Dutch Boy when you need him? Didn’t a bunch of German stories involve women keeping little children under their skirts and then letting them out at parties? I wonder if those kids were there to hold a bucket while her tampon leaked.

Time to get creative. What are my options? How easy is it to just rip out my uterus and stomp on it? That would probably be messy. Hmmmmm cauterization? The only thing we have in the office bathroom is a curling iron and that seems inefficient. Okay. No quick fixes. Time to start crafting with bathroom tissue.

I have wrapped my underwear in a makeshift diaper mummy wrap and then laid lasagna layers of paper towels on top. Hopefully that will last one hour.

Honestly, this is better than when I tried that period catching underwear that didn’t work but did manage to make my vagina smell like a pool. I told my lover if he went down on me it would turn his hair green. Ha ha, I’m so funny. He’s so lucky to have me. Oh, don’t laugh, gushing.

I want to eat chocolate covered salt and to sit down. There’s some Halloween candy in the break room. I’ll just polish off that bowl.

Nothing is as much of a betrayal as eating mini Whoppers with only two malt balls instead of three. I shall never forget this day nor will I forgive Hershey’s. I hope everyone that rides their roller coasters careens into the sky and then sues Hershey’s into oblivion.

My period app just sent me a notification reminding me to update my symptoms to have more data on my cycle and I threw my phone across the room. Nothing had better run behind schedule today. If there is so much as one hiccup I will hide in the bathroom. If fucking Andrew asks me to take notes in this meeting I will give him a 20 minute lecture on how we have the same fucking job and I’m not his assistant and if he wants notes he should take them himself. Or hire an assistant. Because I have fucking boobs doesn’t mean it’s my job to make sure he remembers shit that is said.

I only got three hours of sleep last night because now that I have my IUD I experience cramps with a piece of copper wedged in my cervix.

I’ll never forget the popping sound that happened when my gyno put it in. It’s echoing in the caverns of my head somewhere.

Now I have to go back to the bathroom to reline my underwear. Aaaaaaaaaand we’re out of paper towels. Great. Guess I’m using Kleenex. There’s only one. Maybe I can just use the paper from the shredder.

I probably should just ask to go home but that feels like a cop out. A lot of my friends have worse symptoms than I do and I don’t want to look weak or whiny or even have to mention this. Can I go home? Have I worked hard enough and long enough to deserve to go home for feeling terrible while I’m menstruating? How do I even ask my boss about that? What do I call it? It’s not like I have Uterus Lining Regenerative Syndrome. If I need to leave I will feel like I’m both letting the patriarchy win and not supporting feminism by being loud and real about Shark Week. Periods are a double edge sword and going by how my cervix feels, I sat on it.

Running upstairs to get to the third floor bathroom for more paper towels resulted in squelching sounds coming from between my legs. I assume everyone can hear it. And probably smell it. I wonder if it’s true what Rachel said in the sixth grade that dogs will maul you on your period because they think you’re steak. I wonder if I would even care. That might be a really adorable death actually. Just get mauled by a flock of corgis.

I GIVE MYSELF TO YOU, MENSTRUATION CORGIS. I GIVE MYSELF OVER TO YOUR ADORABLE ATTACKS. CONSUME ME, FLUFFY HELL HOUNDS. AS LONG AS YOU CUDDLE ME AS I DIE.

Oh God, now my phone is ringing. What do you people want?

It’s the end of the day. I try to be cool. I am just shuffling at this point so as to not upset my soaked underwear and the loose paper shreds I have stuffed in there. I wave at all of my coworkers who I hope are none the wiser. Keep cool. Keep cool. I’ve managed this for seven hours and now I can shuffle the .7 miles home and then get a tampon, wear pants that don’t judge me for being bloated, and eat this entire day away. And probably die from Toxic Shock Syndrome.

My cat got into my box of tampons and stripped them and dragged them all over the apartment. Fuck it, I’ll stuff it up there with fingers.

I should have just held my bladder like that guy suggested.

If you like my work, please support my Patreon.

PHOTO GALLERY
11 Period Illustrations That Are All Too Real 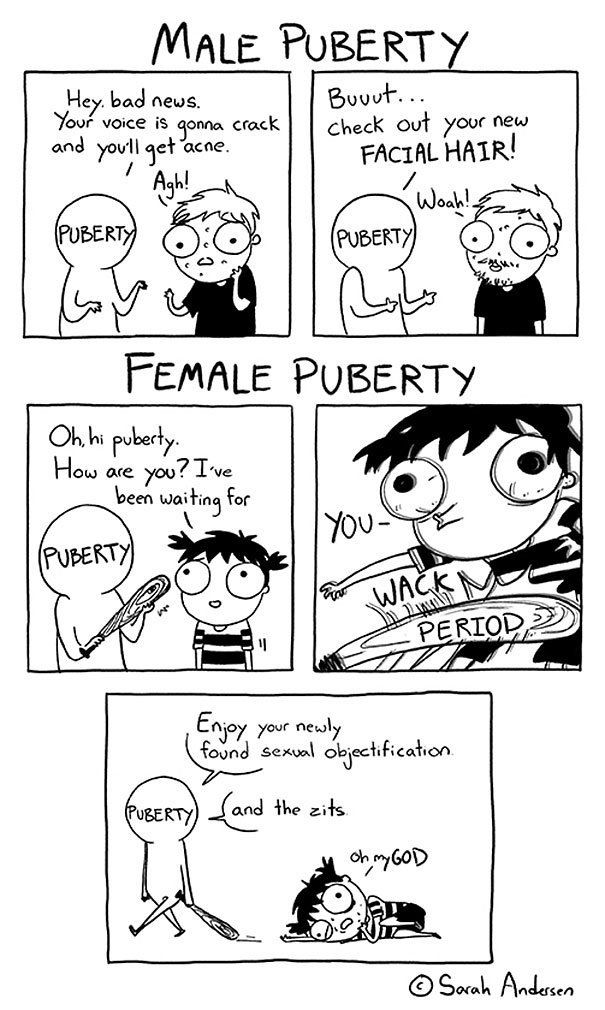