It's been a week since the official 20th anniversary commemoration of the historic Tiananmen Square demonstrations. But before the memory of those events of 1989 fade completely from our collective consciousness, let me address something that was missing from most news accounts and analyses; China's pro-democracy movement was stained by events that occurred parallel to its tragic climax at Tiananmen: Mass demonstrations elsewhere spurred not by the yearn for democracy but by anti-black skin prejudice.

Fast forward to Beijing 2008. In the area surrounding the Worker's Stadium in the run-up to the Olympics last summer, bar owners were asked by Public Security Bureau officials to refuse service to black foreigners, who are often profiled as drug dealers, whether they are students, businessmen (most are men), academics or actual drug dealers. A year earlier, dozens of of African men in the Sanlitun entertainment district were rounded up and beaten by Chinese police cadets. Among the witnesses, was a white American named Gabriel, who I interviewed in Beijing at the time. Gabriel was a frequent visitor to Sanlitun, one of Beijing's most popular tourist areas. He declined to spell out his full-name for fear of being expelled from the country but said that when the police arrived that night in the fall of 2007 there were no discussions or warnings.

"They just went for every black face in sight"

His account was backed up by my Chinese translator, but who was ambivalent about whether the arrests were justified. Gabriel drew a more definitive conclusion:

"I'm learning a lot about racism here toward African Americans and people from Africa here. There's a lot of racism that goes on. On this street they just started attacking and hitting any black face. So I'm in an advantage because I'm a white American living here."

Africa and China have forged close ties for decades. 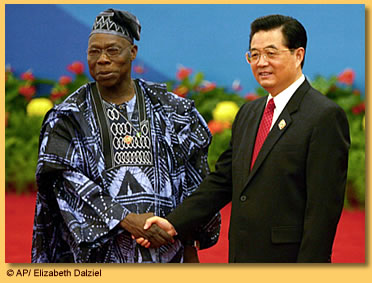 But person to person relationships have traditionally been tense. Africans represent the antithesis of Chinese white skin obsession, said writer and social commentator Lijia Zhang, author of a recent memoir "Socialism is Great". "There's a term describing the skin as kind of a murky dark. It's very difficult to translate," she told me. "But it has a strong negative connotation, 'you're so dark'. And in extreme cases someone that's really dark is called a 'black ghost.'" The word in Chinese is hakgwei (黑鬼; jyutping: haak1 gwai2, literally: "black ghost")

That was the term reportedly hurled by Chinese students during violent protests against Africans on Chinese campuses in the lead-up to the pro-democracy rallies in Tiananmen Square twenty years ago. Months before Chinese students began to engage in mass demonstrations for democracy some of them were demanding the expulsion of African students from Nanjing's Hehai University, among other campuses. Like most foreign students, the Africans enjoyed greater standards of living in China and some dated local women. Among the signs in the crowd at Hehai on Christmas Eve,1988, were placards demanding greater democracy alongside ones proclaiming "death to the black devils."

What are we to make of this painful paradox? In 1989, I asked Wuer Kaixi, a student leader and president at the time of the Federation for Chinese Democracy in the United States. We had met in December of 89'at an awards ceremony in Boston. Wuer, like the other honorees, had put his life on the line fighting for human rights. He was a fugitive from China, wanted for agitating for democracy. Last week Wuer Kaixi arrived in Macau hoping to be allowed to return to China. Instead he was deported to Taiwan. He has remained consistent all these years in his advocacy of democracy.

But halfway through the awards dinner two decades ago, I felt it necessary to interrupt the solemn reflections on the demise of the student movement to ask Wuer, and other Chinese students sitting at my table, to reconcile their legitimate passions for democracy with the actions of students who physically attacked Africans at Hehai University and elsewhere throughout the country. How, just before erecting the "goddess of Democracy" in Tiananmen Square, could some proponents of a more open and just society rampage through Nanjing and other cities exhorting their countrymen to "kill the black devils?"

The movement's contradictions infuriated me. As strong as the lure of freedom and equality is the widely held Chinese belief, shared by Japanese, Korean and other Asian cultures, that the darker a person's skin the lower his status and worth. That Chinese students at Tiananmen Square sang choruses of "We Shall Overcome" only underscored the dichotomy. Even the barrage of bullets fired at unarmed chanting figures in the early morning of June 4, 1989, though shocking and tragic, did not quiet my concern at the awards dinner over the contradiction of racism and democracy.

I shared these thoughts with Wuer Kaixi. With eyes moist from the speech he had just given that night, he spoke of friends who died at Tiananmen and those who had "disappeared." He talked about fear and courage. Most important, he acknowledged that the democracy movement, like Chinese society as a whole, is ridden with various degrees of xenophobia, including racism. He conceded it was an imperfect movement.

Wuer's sincerity that night continues to spark in me a great degree of self-examination. African-Americans had also suffered the disappearance of loved ones, on dark Mississippi highways and lynchings in the light of day. But ours, too, is an imperfect movement for civil and human rights, sprinkled with numerous contradictions.

It is like a lot of social phenomena that runs counter to what we might generally assume about progressive social movements: African American church leaders who crusade for black civil rights while militating against the rights of gays; Gay "progressives" who disparage black people at rallies; liberal Jews who find anti-Arab demagoguery acceptable in spite of their own long history of oppression; women who campaign for equality on the job while running rough-shod over their female secretaries.

These examples are indeed contradictions, but they do not negate movements formed to advance American civil rights; to advance the civil and human rights of gay Americans seeking and deserving the same rights as heterosexual Americans; to combat anti-Semitism; or to promote gender equality.

But such contradictions also should not be ignored. The lesson, said Wuer Kaixi that night in 1989, is that the fight for freedom anywhere is rife with contradictions. Reflecting on America's painful history, I told him that the issue of bigotry will have to be dealt with if any of us are to be truly free. He agreed. I raised my glass to Wuer Kaixi at the dinner table and toasted his quest for democracy in China, however imperfect the movement for achieving it.