Two recently released reports provide an enlightening picture of the state of higher education for Latinos in the United States. While there have been encouraging developments over the past 10 years, Latinos remain underrepresented and underserved across virtually all post-secondary education sectors, with many barriers to Latino higher education attainment -- and the accompanying life-long, generation-spanning benefits that could accrue -- remaining stubbornly in place.

The first report is a 2015 fact book, "The Condition of Latinos in Education," prepared by Excelencia in Education (EIE), which contains a wealth of information from early childhood education through graduate studies and into employment.

Data make it clear that Latinos will represent a greater and greater percentage of our students -- and thus our workers -- in the future. The Latino population is growing: From 2004, when EIE released its first fact book, to today it has grown by 9 million, or from 13 to 17 percent of the U.S. population. The number of Hispanic students in public elementary and secondary schools has increased as well, from 19 to 24 percent.

Not all is bad news. The EIE report noted that over the past decade we have seen double-digit improvements in K-12 performance on National Assessment of Educational Progress (NAEP) tests among Latino students, with high school completion rates increasing from 57 to 65 percent and high school dropout rates cut in half. And this has been associated with increasing college enrollment rates (from 54 to 70 percent), an increase by half in the number of institutions of higher education enrolling a high concentration of Latino students, and improving college completion rates (from 17 to 22 percent).

And Latino parents are as likely as others to be involved in their children's education. In fact, the results of a recent College Board/National Journal Next America Poll indicate that Hispanics are more optimistic about the value of a college education than are whites.

With all of that improvement, you would think Latino students would be in good shape. The fact is that they are still far behind most other groups, which just underscores how deep the deficits have been.

Listed are some of the more concerning facts from throughout a student's educational life, from detailed data and sources reported in the Factbook:

Not surprisingly, workforce statistics in the report follow suit, showing higher rates of unemployment, fewer Latinos in the highest-paying occupations, and overrepresentation in lower paying service occupations. Even though Latinos earn a large number of health degrees at varying levels, they still fill less skilled and lower paying jobs in the field.

A second report, "The State of Higher Education in California -- Latino Report," released by the Campaign for College Opportunity, examines similar issues for that state's Latino population. In California, one in two children under the age of 18 is Latino, and so the future of the state and its economy will rise or fall to a great degree on their educational progress. And the situation in California, the state with the largest Latino population in the U.S., mirrors that of the nation.

For example, in California, though the percentage of Latinos earning high school diplomas and entering college continues to improve, Latinos are underrepresented in every segment of higher education and have lower levels of college degree attainment than other racial/ethnic groups. On average 31 percent of Californians have a bachelor's degree, while only 12 percent of Latinos in the state do. And the difference is even more stark for foreign-born Latinos, only 7 percent of whom have a bachelor's degree or higher compared to 18 percent for native-born Latinos. A dramatic reminder of the need to engage the recently immigrated population as well as the established Latino community.

Many solutions have been offered, and most have the potential to help not only the Latino population, but all students. See, for example, the textbox below with recommendations to policy-makers and higher education leaders (my comments in italics added to Campaign for College Opportunity suggestions). 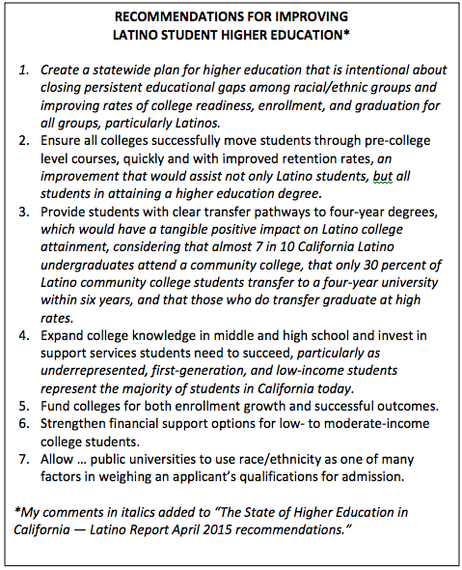 However, most important is that states get intentional about closing persistent educational gaps among racial/ethnic groups and improving rates of college readiness, enrollment, and graduation for all groups, and that they create plans to address these issues with a focus on the underserved. Without that, the U.S. will simply not be able to meet its future economic and competitive challenges and obligations.

Let's be deliberate and intentional about addressing this important national challenge.