Once upon a time, poetry was the language of popular literature. Dactylic hexameter helped Homer recall and rework and recite his Iliad and Odyssey epics.

High school English class. Literature courses, African American literature courses, creative writing workshops. Throughout my education, a few works of art were taught universally and repeatedly, at the most basic and the most advanced levels. I can think of few of these--only three, actually: "Stopping by Woods on a Snowy Evening" by Robert Frost, "Do Not Go Gentle Into That Good Night" by Dylan Thomas, and "Harlem" by Langston Hughes.

I remember being struck by Frost's and Thomas's poems in my youth. I discussed them with my father. Frost's "And miles to go before I sleep" and Thomas's "Rage, rage against the dying of the light" ending lines are viscerally affecting, even to a young person with relatively little life experience. All of us, universally throughout the human experience, understand at an instinctive level that life is a journey, and Frost articulates the exhilaration and exhaustiveness in his wondrous verse. Thomas articulates nearing the end of that journey--the panic, the animal instinct to preserve oneself. These poems help young readers to understand the concept of metaphor so successfully that little or no explanation of the concept is needed: it's simply understood.

"Harlem," for me, was a different experience. Hughes's poem is even briefer than Frost's and Thomas's already-short poems are. It is a collection of rhetorical questions and elegantly evocative images that arouse the senses.

This is what I took from the poem when I was young: that language can activate the senses, and that a poem can be a means through which to explore philosophical ideas without necessarily having to answer them, essay style. In other words, the poem can catalyze the imagination and can add depth to how we perceive our experiences. I didn't really "get" anything else about the poem when I was young.

Then, in my first African American literature class in college, I came to understand the historic context of Hughes's poetry, of what Harlem represented to him and to black Americans, and this lent the poem a great deal of depth and deepened my appreciation of it.

But I still didn't get it. 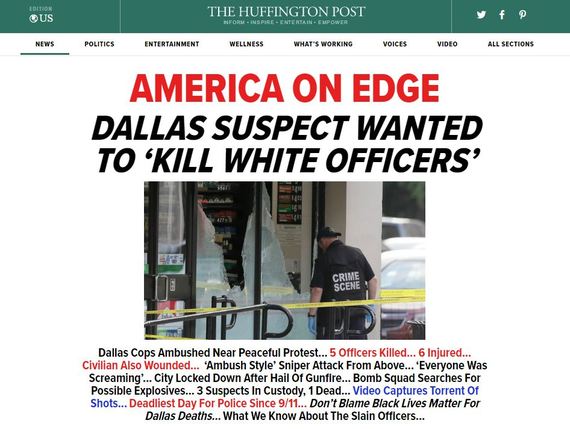 Unlike Frost's and Thomas's poems, Hughes's poem is heavy with political ramifications. Actually, it conveys how human lives are affected by culture, society, and politics. For white kids growing up in Virginia suburbs, some of this is relatable conceptually when taught the context. It's not directly understandable without knowing people who live the lives Hughes wrote about.

Langston Hughes doesn't tell us what dream was deferred--it could be any dream. As a kid in high school, and then as an aspiring writer in a college-level literature class, I assigned my own dreams to this poem's open-ended exploration. Despite learning about Hughes's life and reading more of his work, even as a college student Hughes's "Harlem" was a kind of self-help poem to me. I read it often: "What happens," I would ask myself, "if you don't take chances and try to become who you feel you are meant to be?" And then I would go down the list: I might dry up. I might fester. I might rot. I might become bitterly saccharine, nostalgically tethered to bygone potential that I never exploited.

I never really paid all that much attention to Hughes's last line until now.

I have a hard time wrapping my mind around what is happening in this country, in my country. It doesn't feel like the same United States of America that I grew up in. Where I was taught in school, for example, that ending a sentence with "grew up in" is a serious offense. Where I went to school in a time and place during which no one--no one, ever--had a fleeting worry about being blown away by multiple rounds of bullets while sitting in a classroom. That didn't happen then.

But I now realize, too, that my United States of America is not everyone's United States of America. I first saw this, and couldn't make any sense of it, after Hurricane Katrina, when I noticed that nearly everyone I saw on TV whose life was devastated was black. The talking heads delved into this, explaining that the poor, black neighborhoods of New Orleans were those primed for disaster, built in the areas most likely to be devastated by a flood, and under-resourced for emergencies. The information helped to make sense of the images but, really, the images alone told the story in black and white terms. Until I saw this, I had always thought of racism in individual or cultural terms--how people behave toward one another and think about one another. I never, ever thought about the life-and-death consequences of racism being built into our infrastructures, urban planning, and economic design. Katrina taught many of us who were once naive--and who now would be ignorant not to accept it--about this reality.

Moving to Washington, D.C. and becoming close friends with people who grew up here, going to D.C. public schools, I learned that this country is not the same country for all of us. We may have been in school at the same time, less than an hour away from one another, but our environments couldn't have been more different. Friends my age who went to school in Washington, D.C. didn't worry about Columbine and Sandy Hook-inspired shootings, it is true, but many worried shootings and stabbings, gang violence--they worried about surviving every day. It's not even really right to say they worried about these events; they lived these events. So many people, I never really understood, live in a world that I had to learn about in a college film class focusing on depictions of violence in the media.

In HBO's 1998 documentary "Thug Life in D.C.," we follow the lives of young people from poorer neighborhoods of the Nation's Capital as they follow a well-worn--and to many of them, a seemingly inevitable--path from school to street to prison. Where I grew up in the comfortable suburbs of Northern Virginia, this was indeed the road not traveled. For many black Americans, and particularly black men, the criminal justice system feels unjust--because, by the numbers and by the way court cases are judged, the criminal justice system is unjust for black American men, who objectively receive harsher sentencing in courts of law than white defendants do.

This may not be an absolute hard-and-fast-with-no-exceptions rule. Lives and opportunities have improved for many people. For a huge number of people, they have not. And any attempt to dismiss the effects of deferred dreams and inequitable treatment should be compared against the words of Hughes's poem. Working in downtown Washington, D.C., I encounter homeless people on every block. Nearly all are black, and they are neither culturally lazy nor individually crazy--although many are crazed and (understandably) enraged by the injustice of barely being able to survive and totally unable to access opportunities in a neighborhood that features scores of restaurants that advertise $12 happy hour cocktails and $33 pan-seared scallops for lunch.

Katrina opened by eyes to invisible inequality. Living and working in a city in which this equality is not only visible but actually a defining characteristic--and knowing that this city just happens to be the capital of the entire country--has widened by eyes in alarm. Seeing horrific video after horrific video capturing violence committed against black Americans by those who supposedly enforce the law made my eyes weep.

Because of sensitivities and fairness, anyone engaged in this discussion is practically obligated to interrupt any such lament to state that, of course, not all police are unjust or biased or racist or [fill in the appropriate term]. That is true. Just because I am in a sense obligated to state this doesn't mean the observation is insincere. It is sincere. Cops put their lives on the line for people every day, and few of us would ever have the bravery, boldness or commitment to do that.

Police do not deserve this.

We can't deny the state of the union, however. We can't deny serious racial and ethnic disparities that are both blatantly and covertly rampant in this country. We can't afford to keep pointing the finger, or to keep denying that this is happening. Everyone is a victim of this--all of us. The #BlackLivesMatter movement came about because of these disparities, and evening out disparities is the only solution to unifying our nation and making it safe again for all of us, from black men who live in high-population cities and fear that every day could be their last day alive or their last day outside of captivity, to the white police officers who were murdered in Dallas.

Langston Hughes predicted in his remarkable, prescient poem "Harlem" that the long-term result of deferring dreams of equality would be an explosion. Langston Hughes told us this would happen. It's not a matter of policy; it's a matter of humanity, human rights, irrepressible human psychology and explosion of pent-up pressures.

Read his poem now, with history in mind, and then read it again thinking about today. When black Americans were granted freedom from the bonds of slavery, those human beings were invited to participate in the American dream. And generation by generation, those dreams have been deferred for so many. The promises continue, but they prove continuously for so many people to be empty promises--tomorrow, people are told, tomorrow you can pursue your dreams. Your children, they're told, will have the opportunities that you haven't. Keep banking on the future. And the pressure builds. I don't know about you, but every time I see a shaky smartphone camera video on the news, I've come to expect the seemingly inevitable outcome: another black person injured or, if he is lucky, only beaten or humiliated, by some official. And then the pundits debate--the same debates every time. And the pressure builds.

The effects of this are many. Some people simply wither away like raisins. Some suffer throughout their lives, some resort to unrealistically syrupy optimism. In the end, though, Hughes left us with a knowing caution, and he delivers it to us all the way from 1951.

What happens to a dream deferred?

Or does it explode?

We have arrived at the end of Hughes's poem.

We have arrived at the answer to his question.

I wonder if we will ever get to the point of finding out what happens to dreams fulfilled.