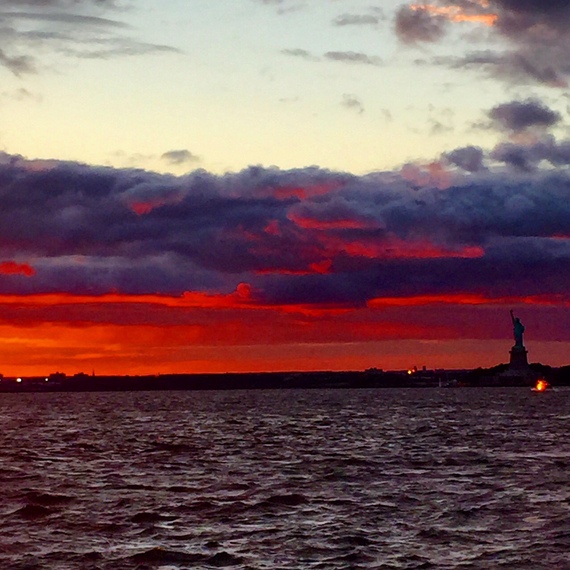 Naturally, dinner conversation amongst a group of friends one sultry Saturday night in August, on Fire Island Pines, would shift to the curious case of Rentboy.com.

Among those seated at the table -- educators, activists, and actors -- each agreed that the Department of Justice (DOJ) and Department of Homeland Security's (DHS) raid of the online escort service a couple of weeks earlier appeared odd, especially considering Rentboy had been operating as an open business for 18 years already. Some even charged that more sinister forces motivated the move -- people high up the chain of command with things to hide.

"This was a directive from above, someone in Washington made this call," one in the group speculated that night as the waves crashed in the background and the moon shined full.

Others that night saw the takedown as political backlash to recent LGBT advances, primarily the Supreme Court ruling on marriage equality.

While some agreed with both those assertions, they summed it up by saying the Rentboy.com bust is the "gay body being politicized and mediated" by a "unique and questionable branch of government."

Fast forward a couple of weeks and a friend told me to look closer at the complaint. It turns out that the folks running Rentboy.com may have outed themselves to the Department of Homeland Security.

In September 2010 and March 2013, Easy Rent Systems Inc. -- Rentboy.com's registered name on public record -- applied to the United States Department of Homeland Security, Citizenship and Immigration Services for an H-1B non-immigrant working Visa on behalf of Soto Decker. The application was signed by Rentboy's CEO Jeffrey Hurant. Decker had worked at Easy Rent Systems, Inc. doing the books and records from 2012 until the raid.

The Visa application identified Easy Rent Systems, Inc., to Homeland Security as the parent company of Rentboy.com, which the application flat out said had "revolutionized the escorting industry by moving it online and away from agencies and disreputable bars."

To be clear, the Department of Homeland Security investigates and prosecutes prostitution through US Immigration and Customs Enforcement or ICE. DHS has said that ICE is responsible for the enforcement of laws that promote legitimate movement of people, goods and currency in both domestic and foreign transactions.

Included in the Easy Rent Systems application to Homeland Security were a number of articles that said the escorts who advertised on Rentboy.com were having sex with customers in exchange for money. Perhaps Homeland Security officials saw such efforts at transparency more so as a thumbing of the nose at authority?

However, despite Homeland Security's hand delivered jackpot from the horse's mouth, the cost of a year's long investigation and the bust that followed, makes very little sense. Even The New York Times called DHS involvement in the Rentboy takedown "peculiar." Writing in an August 28 Editorial that prosecutors "have provided no reasonable justification for devoting significant resources, particularly from an agency charged with protecting America from terrorists."

Excluding the Visa application screw up by Rentboy CEO Hurant, the DOJ's official complaint against Rentboy.com reads like a lascivious primer on gay sex.

When I asked the Department of Justice why DHS was involved, the official answer was "the crime involved the internet." Next, when I contacted Homeland Security (DHS), a spokesman sent a separate statement.

"Our allegation with this case is that the business and its principals purported itself to be an escort service while promoting criminal acts, namely illegal prostitution. We allege violations to the federal Travel Act, which forbids interstate or foreign travel for the purpose of criminal acts."

But aren't there other online websites that cater to heterosexuals that do the same thing?

DHS was firm in its reply: "Any insinuation that a specific population was targeted is categorically false," said a DHS spokesman.

One possible conclusion is that the Department of Justice and Department of Homeland Security are prosecuting Rentboy.com as a message to the public, meant to send a signal that cyber policing abilities are at full strength. Or a statement on the outright arrogance Rentboy operated by, assuming that big brother would look the other way.

I'd also wager that the Rentboy.com shutdown is a potentially precedent setting case. The takedown of the site also signals that the level of online government surveillance continues to grow and where it stops, nobody knows. Not only that, because of numerous Patriot Act shields, the laws that govern who or what the Department of Homeland Security monitors and prosecutes are at best murky and evolving.

Past patterns of DHS prosecutions of illegal prostitution, coupled with the fact that Rentboy.com was able to operate in the open for almost 20 years, suggest that DHS is stepping up its unique authority. DHS will likely increase its online surveillance of web activity under an increasingly wide banner of what it deems to be suspected criminal activity.

With that said, I decided it might be time to check in with a few legal experts to get their thoughts on the growing caldron of theories surrounding the government's motives.

"I don't think there is too much you can infer here," Brooklyn Law School Professor Miriam Baer said a couple of weeks after the raid. Furthermore, according to the complaint (which she read briefly online), the arresting Homeland Security agent is part of a group that investigates prostitution.

"I assume, then, that the Department of Homeland Security must have an interest in investigating online prostitution that makes use of the Internet," said Baer.

She also suggested I follow up with DHS and ask them directly if they had prosecuted any online (internet) prostitution rings in the past 3 years or so.

A Homeland Security spokesman sent a search link that included all official press releases from US Customs and Immigration Enforcement actions that contain the word prostitution.

I was able to find just one other case detailing a DHS prosecution that alleged online prostitution activity from the past three years. In that 2013 case, DHS charged six Seattle defendants with recruiting women from Asia to serve as sex workers, and then required them to pay off as much as $60,000 in smuggling debts.

What often gets confused when discussing the Rentboy.com case is what relationship Rentboy had with the escorts who used the site. That is, escorts who advertised on the site were not contracted or outsourced by Rentboy. Rentboy was essentially a transparent cyber bulletin board.

But among the more than one hundred other prostitution related cases DHS has prosecuted are sordid stories of sex trafficking, human smuggling, child exploitation, and even enslavement. There were massage parlor level vice crime busts featuring local criminal gangs and even a few brothels with madams and pimps who traffic human beings across state lines and across the world.

The trove of DHS cases read like tales extracted from a modern day noir film or an episode of COPS. However, these cases are the allegedly true stories, details of the nation's underground that functions among us, the often violent criminal underbelly that exploits women, children, and men. Each case also offers up a distinct taste of the dangerous reality illegal sex workers in the United States face each day.

They are precisely why proponents of the Rentboy.com business model say the site offered a safe, transparent online advertising space for escorts and their clients.

Megan Schmidt-Sane graduated from the MPH program at Columbia University and has since worked with a sex worker rights organization in Kampala, Uganda and with the American Jewish World Service's sexual health and rights team.

Schmidt-Sane says when there is partial or full criminalization of sex work and police implementation of those laws, sex work is driven underground and is ultimately more dangerous. She said it is a grave violation of rights when the state controls adults engaged in consensual sexual acts.

"The Rentboy raid is just one example of this egregious violation of rights and shows the need for legislative reform. Rentboy was a site that allowed sex workers to connect directly with clients, to set their own rules and prices," said Schmidt-Sane.

She said the United States government (and the DOJ/DHS)should set an example for human rights and follow in the footsteps of countries like New Zealand that have decriminalized sex work and made life a lot easier for a lot of consenting adults.

"The main reason DHS probably handled the Rentboy case is because there is far less red tape with that agency," said political operative and former spokesman for internet freedom group TestPAC Michael Embrich. "They can essentially freeze money without a warrant due to anti-terrorism laws."

The Protect America Act altered the definition of electronic surveillance and it created additional procedures for authorization of intelligence gathering on a program-wide basis; and set up a procedure for the courts to review those programs.

Embrich goes further, arguing that the Rentboy case is likely a "statement case." By prosecuting Rentboy, the DHS sends a message to the public that the agency is equipped to handle these types of alleged internet crimes. The agency likely wants to show it is capable, he said.

New York City Attorney Keith Sullivan said in an email note that there's no question that Rentboy.com was in the DHS wheelhouse.

DHS is a relatively "young" part of the Government, and as such their role is always evolving, he said, they monitor alleged online criminal activity through their National Cyber Security Division.

"I suspect we will learn that DHS suspected or has evidence of human sex trafficking," said Sullivan of the Rentboy.com case specifically. He also said that the level of sophisticated, investigative-tools and techniques currently being utilized on the Federal level has not always been around. So, operations at Rentboy that might have escaped the eye of law enforcement before, are now far more "transparent and detective," according to Sullivan.

"It seems like prosecutors are using a way around, or a loophole if you may, to bypass civil liberties for internet companies by using the department of homeland security to prosecute these cases as somehow related to homeland security," Embrich said.

Homeland Security Investigations Acting Special Agent in charge, Glenn Sorge, stated in the Rentboy press release [release?] that, "HSI will use its unique authorities to disrupt and dismantle such organizations, and seize the millions of dollars in illegal proceeds they generate."

The bigger question may be how unique and broad Homeland Securities' surveillance and enforcement powers actually are?

Back on Fire Island that night, by the time the full moon had risen out over the Atlantic, a slew of organizations, including the American Civil Liberties Union, had joined Lambda Legal and the National Center for Transgender Equality - among others - in arguing that the Rentboy bust was foul.

"No one's life has been improved by the raid on Rentboy, and thousands of lives -- a great many of them LGBTQ -- are ruined by the criminalization of sex work every day," said a statement from ACLU.

The Rentboy.com case will be prosecuted in the United States District Court for the Eastern District of New York.