Imagine a shot-by-shot recreation of the classic Beatles' movie A Hard Day's Night set not in Liverpool, but on the black and white streets of Mexico City. A quartet of four "fabulously dressed" men in black reminiscent of John, Paul, George and Ringo are being chased by dozens of determinedly irate women. But these are no pop stars.

"Meet four agents from the U.S. embassy in Mexico City, and the women who chase them." Reads the vintage style text on the screen. "They lost their children, husbands, siblings and parents because of the U.S. 'War on Drugs' in Mexico." So begins the short film, Narco-Mania!

Could someone actually be bold enough to make comedy about the devastating War on Drugs in Mexico?

Filmmaker, journalist and self-proclaimed "recovering documentary filmmaker" Greg Berger (known in Mexico as "Gringoyo") has spent three years doing just that. In the process, his videos have also documented the rise of the world's largest mass movement against the Drug War since Richard Nixon declared it more than 40 years ago. Hundreds of thousands of Mexicans have taken to the streets since 2011 to protest that country's disastrous War on Drugs.

"Narco-Mania!" will make its New York City premiere this Friday, August 3rd, at Alwan For the Arts in lower Manhattan.

"When I was making serious documentary films I found that people would watch a well-made investigation on an important topic, get depressed, and then change the channel without doing anything about it," says Gringoyo. "But short funny, viral videos about those very same issues go far beyond the activist echo chamber and lead people to want to know more and to get involved."

Three years ago he stopped making documentary films for television and started making short satires distributed online through the website Narco News to highlight the perverse logic behind the Drug War. The films soon attracted a cult following in Mexico and beyond.

A few months ago, while covering a mass action against the Drug War in the central Mexican city of Cuernavaca, he started talking to a teenager with a Beatles t-shirt who told him that it was his first time participating in a social movement. When he found out that Gringoyo had made "Narco-Mania," he confessed that he had first heard of the movement against the war after watching the video on Spanish language Beatles' websites where Narco-Mania! had been posted.

"That's why we're making these videos," explains Gringoyo. "More than 50,000 people have been killed in the crusade to stop the flow of illegal drugs through Mexico to the United States. There has been zero reduction in the drug trade, and yet the governments of both countries claim they are winning the war. What could be more absurd than that? I want people to know what's going on and help the movement to end this absurdity to grow and win."

In the past, Gringoyo has created outlandish characters based on absurd "gringo" stereotypes in Latin America to highlight wrong-headed U.S. policies and attitudes in the region. Many of Gringoyo's recent characters and street antics document increasing opposition to the war.

In Hungry for Justice, he tells the story of the movement against the Drug War through the eyes of a globetrotting "revolutionary tourist" who hangs around Mexican social movements for the free food he receives, and finds himself unexpectedly transformed by it. Foreigner Watch, produced under his supervision by students from the School of Authentic Journalism, is a spoof on U.S. cable news and the dismissive way it covers nonviolent civil resistance movements like the movement against the Drug War in Mexico.

Gringoyo is optimistic. "In 20 years people will look back and see the Mexican resistance to the Drug War as a key moment in what will be an eventual victory against the worldwide Drug War."

Gringoyo will be present at the New York premiere of Narco-Mania! And Other Parodies of the War on Drugs will be held this Friday, August 3rd, at 7:30 at Alwan for the Arts, 16 Beaver St. 4th Floor, in New York. It is a fundraiser for the School of Authentic Journalism. Admission sliding scale $0-$20 with a suggested donation of $20.00

PHOTO GALLERY
The Stinging Comedy of Gringoyo Cuts Away the Twisted Logic of the Mexican Drug War
Download
Calling all HuffPost superfans!
Sign up for membership to become a founding member and help shape HuffPost's next chapter
Join HuffPost 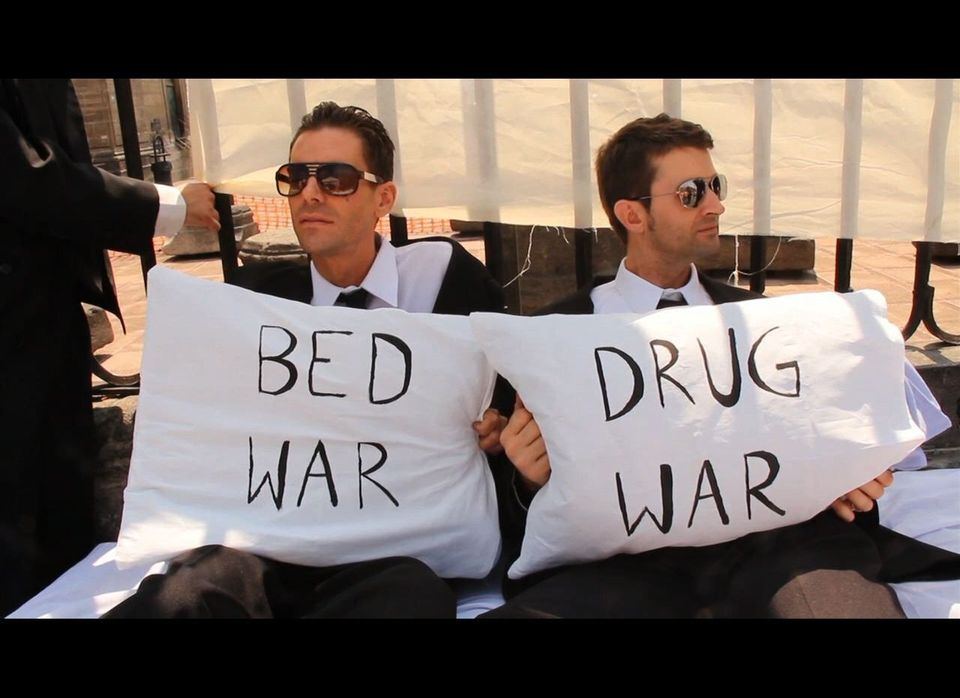