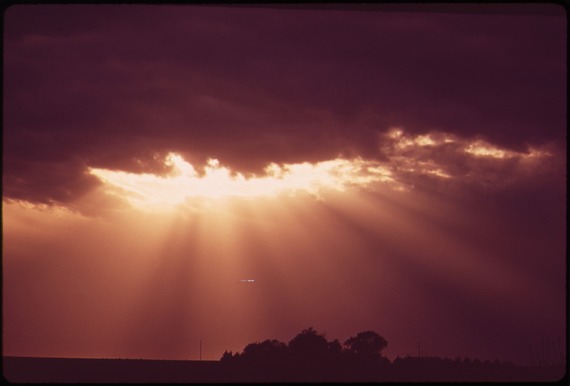 Lightning flashed across Kentucky skies a few nights ago. "I love storms," said my roommate, Gypsi, her eyes bright with excitement. Thunder boomed over the Kentucky hills and Atwood Hall, here in Lexington, KY's federal prison. I fell asleep thinking of the gentle, haunting song our gospel choir sings: "It's over now, It's over now. I think that I can make it. The storm is over now."

I awoke the next morning feeling confused and bewildered. Why had the guards counted us so many times? "That was lightning," Gypsi said, giggling. The guards shine flashlight in our rooms three times a night, to count us, and I generally wake up each time; that night the storm was also a culprit.

As the day continued we saw large pools of water had collected at each entrance to Atwood Hall. Prisoners from drought-ridden areas wish they could collect the rainwater and send it home. Fanciful notions, but of the kind, at least, that can help us remember priorities. I suppose it's wise, though, to focus on what can be fixed. The elevator here, for instance.

The Department of Justice Budget for Fiscal Year 2015 provides 27.4 billion in discretionary funding. In state prisons alone, it's estimated that taxpayers spend an average of $31,286.00 per inmate per year. (The Price of Prisons: What Incarceration Costs Taxpayers, p. 9). But, for most of the 2.5 months that I've lived here in Atwood Hall, the elevator from the basement to the 3rd floor, which should serve close to 300 women, has been out of order. According to "inmate dot com," our in-house rumor mill, a decision was made, last month, not to fix it. In the past several weeks, two women arrived in wheelchairs and another new prisoner is blind.

I like moving from the basement to the third floor on the staircase. It's easy exercise. But traveling up and down the stairs can be life-threatening for many prisoners here.

Ms. P. seems to be in her seventies. Wiry white hair, fixed in a braid that reaches down her neck, surrounds her golden brown face. I like to imagine a framed oil painting of her gracing the first floor entrance.

A few nights ago, I watched her toil to haul herself, hanging on to the handrail, from the basement to the first floor. She needed to rest on the landing, winded, her heart pounding, barely able to speak. But Ms. P. made the best of it. "Ms. P.," said another prisoner comfortingly, "maybe they'll get this elevator fixed this week." "I'd contribute my entire month's salary if it would help repair the elevator!" Ms. P. said with a chuckle. She very likely earns $6.72 cents per month, at 12 cents an hour. Three of us readily agreed to match her donation, which would amount to about $28.00.

We need Ms. P.'s lightheartedness. But I've seen flashes of fury, followed by sad resignation, like lightning giving way to rain, in the faces of guards and prison administrators witnessing these scenes occurring on their watch, but as powerless to stop them as to call off those storms the other night.

A ray of brilliant sun fell for me last weekend with a visit from an old friend, parent to a lovely child I was especially delighted to see. Once again, I am luckier than so many whose loved ones lack the means for regular and intensive travel. Through our conversation in the prison visiting room, I learned the story of Thompson FCI, a freshly-constructed but never-occupied federal prison near Clinton, Iowa. My friend's folks, who live near the town, have speculated for years, as have all the town's residents, about when or whether the empty prison would ever open. Right now, my friend said, there's only one full time employee in the prison, the warden, and his job is to mow the lawn.

Apparently, local people have been pining for the Bureau of Prisons to act. "The BOP's positive impact on rural communities is significant," says a 2015 paper issued by the Department of Justice. "By bringing in new federal jobs, stimulation of local businesses and housing, contracting with hospitals and other local vendors, and coordinating with local law enforcement, the BOP improves the economy of the town and the entire region where these rural facilities are located."

Yet government's promises to aid small towns with "prison money" often ring false. In an article entitled "The American Prison, Open for Business?" (Peace Review, vol. 20, issue 3), Stephen Gallagher notes that although prisons may bring with them high-paying jobs, "most employees of the prison industry do not live in the host communities." "In a joint WSU/MSU study, it was found that 68 percent of the corrective jobs were held by people who did not even live in the county that housed the prison where they worked. In another study in California, it was found that less than 20 percent of the jobs went to residents of the host community." And most people living in poor rural communities aren't eligible for the better-paying jobs in the prison system.

Communities desperate to host a new prison should also consider the wages that will be paid to the prisoners. What company would choose to hire local non-inmate workers when the BOP can forcibly hire inmates to work for 12 cents an hour, right in their homes, with no need to consider employee benefits, pay raises, vacation pay or insurance. Prison labor creates a labor pool that is always available and can be maintained in a manner similar to the cost of maintaining slaves. If neighboring people lose their jobs, if they have to steal to try to get by, they can always wind up living in the prison.

I'm hard-pressed to see how this can possibly benefit an area's economy, that is if its "economy" is understood to include all the area's people, and not just the wealthiest who can influence prison placement.

When prisons are constructed in rural, southern areas, the political elites can count the entire prison population as part of their census, bringing federal funds into their jurisdictions, but without much pressure to share funds with their new 'constituents,' since the prisoners by and large can't vote. Blighted urban areas lose funds desperately needed for education, housing, health care and infrastructure, while rural people compete to be hired as jailers.

One morning last week, a neighbor across the hall told us she feared she would choke on her own sobs as she cried herself to sleep. I wondered how many times the flashlights would re-awaken her during the night. She had been counting on a sentence reduction and her lawyer had told her, just the previous day, that her case is complicated and she most likely wouldn't qualify. "I can't do 3 1/2 more years here," she said, completely distraught. "I just can't!" "Yes, you can," insisted one of the friends gathering to console her. I watched appreciatively, two people caught in the storm and guiding each other through it.

We hear about the droughts, and the temperature records, and we recognize that more storms are coming. The recent, and for many never-ended, financial crisis was a storm, and I notice that politicians and pundits are in full swing demanding a new regional war overseas with the arguments we'd hoped the nation had learned to reject twelve years ago. We can expect these threats, with ecological scarcity underlying them all, to build into each other: the perfect storm. We remember that storms can build quickly. "I can't do 3 more years" might well be a statement truer, and truer for many, many more people, than my suffering fellow inmate ever imagined. We could be working together preparing shelter.

Many people of Clinton, Iowa will clamor for the prison to open, but not for more direct government help, communal help to foster employment and development in the the area. For many, a "free market" will mean the choice to lose our homes or find a home behind bars, or else to make a living keeping other people there; but without the choice, in an increasingly undemocratic nation, to pool our resources as a community and help each other to stay free; compassionately, or even sanely, to shelter each other from this storm. The jobs will come when strangers file in, in chains - that's freedom. I look around me at "freedom," and at how Ms. P. is getting a step up in the world.

We could awake into the world, build affinities between the suffering people locked in Atwood Hall and its managers, between the struggling rural community of Clinton and the urban desperate they wait to see bused in. Just about everyone longs to raise their children in a world where drought, storms, and brutal want won't loom as insoluble, inevitable catastrophes. Working together we could reclaim misspent resources and correct misguided policies. Our fear and isolation from each other, aiming to get a step up above our neighbors, our reluctance to live in a shared world, may be worse than the other storms we face.

The other storms will come, and we will have to see how we weather them, but what if our terrible fear of each other could pass us by? What if, for those of us doing the easiest time, "I can't do 3 more years" became "I won't make you do 3 more years" - became our part in a chorused "we won't do 3 more years!" ringing through our society. How miraculous it would be to hold our children and grand-children and sing, "I think that we can make it. The storm is over now." This article was first published on TeleSUR.