I recently had the pleasure to sit down with filmmaker Becca Roth as she heads toKickstarterto make her LGBT-related documentary,One: A Story of Love and Equality, a reality.

AJ: Tell us a little about you and film. How did you get started in filmmaking?

Becca: I was always kind of a shy kid, and I would always dream up more interesting and eventful versions of my life in the form of movies. In high school, when I realized I liked girls, I developed a huge crush on this girl, and I felt like I couldn't tell anyone about it. To cope, I wrote a feature-length screenplay about it in my head. I would think about it all the time, writing catchy dialog, picking out a soundtrack, everything. It had a very happy ending.

Then I registered for a summer program at Barnard College and saw that they offered a filmmaking class. I had never really thought about bringing these daydreams to life, but I decided to try it, and I ended up loving it more than anything I had ever done in my life. I wrote and directed a film about a girl who discovered that her boyfriend was gay, and it won the best screenplay award at the end of the summer. A few years later, in college and still in the closet, I took another film class. This time, I got up the courage to tell the story that I had dreamed up in high school. I put every ounce of my heart and soul into it, and it was really well-received. It ended up being my "coming-out" movie. This was the first time that I realized that this was something I could do for real, forever, as a career. And the feeling of expressing my deepest truth in this art form was invigorating. I wasn't going to stop.

AJ: Where did the idea for One: A Story of Love and Equality come from?

Becca: In November of 2011, my friend Victoria told me about an upcoming vote in North Carolina that would restrict legally recognized unions to marriage between one man and one woman. I couldn't believe that in 2012 there was a state that was actually proposing something like this, and that there was actually a chance that it would pass. I did some research and discovered that 30 other states already had amendments like this, and that North Carolina was actually the only state in the South without one.

Of course I was hurt that anyone would want to vote against relationships like mine, but instead of getting angry about it, I began to wonder why this was going on in the first place. Most of these amendments, including the one in North Carolina, were ballot initiatives, voted in by the people. And most of them passed by a landslide. It was hard for me to believe that millions of people in the country are just flatly hateful. I am a person who came to my beliefs throughout the journey of my life, realized I'm gay, and have reasons for what I do and what I stand for. Those who are anti-gay must also have reasons for their beliefs, even if I don't agree with them. I wanted to find out what those reasons were, not so that I could be swayed by convincing arguments but so that I could better understand the individuals who held them. I was also curious about whether or not this amendment would pass, because North Carolina is known as a more progressive Southern state. So my girlfriend Melina and I decided to follow Victoria down to North Carolina and get to know people on both sides in the two months leading up to the vote.

AJ: What was your process for collecting all the stories for One like?

Becca: We reached out to tons of people all over the state. We contacted people who wrote Letters to the Editor, people who ran various organizations, and volunteers on both sides. We had an overwhelming response from people who opposed the amendment (those who support gay unions and/or legal recognition of unmarried couples), and we ended up having to cut a lot of them out of the film because there were just so many.

Finding those who supported the amendment, on the other hand, was near impossible at first. Most people didn't respond and those who did were adamantly opposed to participating. One organization actually sent out a mass email warning people to "be alert for a possible unfriendly media person named Becca Roth."

This was frustrating, but it was understandable. People in general feel more comfortable talking to those who agree with them, and it was clear that many people on the pro-amendment side were worried that I'd portray them in a negative light.

We also realized later on that a likely reason people didn't respond to us was that we titled the emails "Amendment One Documentary." We thought that the official name was "Amendment One," but during our journey we realized that supporters of the amendment called it "The Marriage Amendment." So in simply calling it "Amendment One," I was automatically identified as being from the "other side." It was all very interesting to discover. 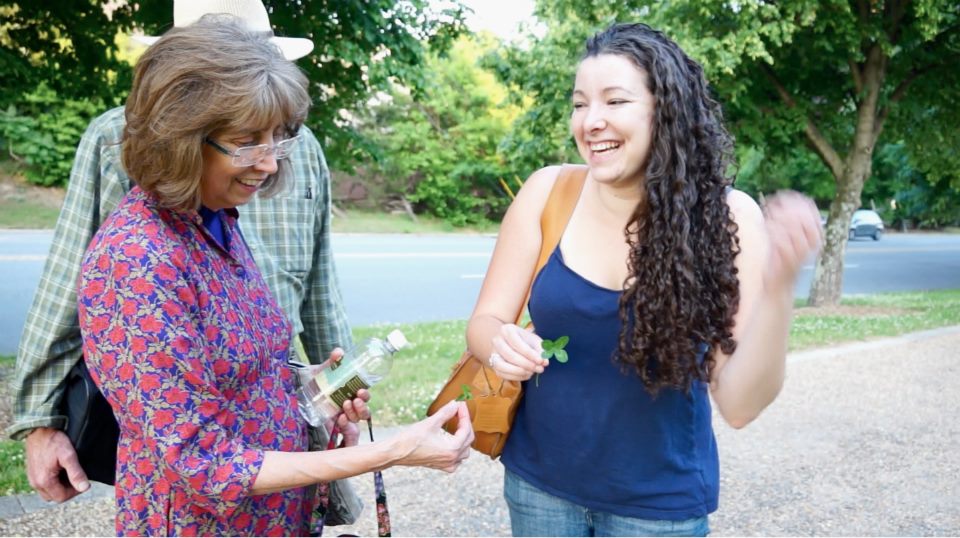 AJ: Why do you think this film is important to get out there?

Becca: This is a huge social issue facing our country right now, and it's dividing us. But I don't think that it needs to divide us. I think that it could be something that brings us closer together.

Even if we wake up tomorrow and gay marriage is the law of the land, there will still be millions of people who are against it and who don't understand why this is happening. I think it's more productive for us to understand why people are fighting for what they're fighting for than to yell at those who disagree with us and shut them out.

Let's say that I'm a heterosexual woman who grew up in a very conservative small town, went to a conservative church every Sunday, and everyone in my life went to the same church where we've been told that not only is homosexuality a sin but that it is a sin to not be against it and to allow it to take place in the world. All of the people in my life who I love and trust believe this too. Now let's say that I'm at a pro-family rally, and a stranger who I've never met comes up and yells at me and tells me that I'm a hateful bigot and that I have no business sticking my nose in something that I have no personal stake in. Am I going to calmly respond with, "Oh, you're right. I am consciously butting in just to be annoying and to make your life harder"? No. I, like any other person, will put my guard up, and maybe I'll yell back. And then we'll keep yelling back and forth, and we'll tune each other out, and we'll view each other as two-dimensional enemies. Our opposing beliefs will be solidified even further.

So the point of this film is to take a step back and listen to those who disagree with us, because we're all coming from somewhere. We didn't grow out of a hate factory assembly line. All of us, on both sides, are real, flesh-and-blood people, and we all have reasons for why we feel the way that we do. My hope is that in taking a step back, we will gain more understanding and insight into the lives of the human beings on the "other side" and work this out as people.

AJ: What do you hope people will take away from this film?

Becca: I hope people take away the human truths behind all of our stories. I hope people realize that no matter what side we're on, we are all people with hopes and dreams and families and beating hearts, and that we should be kind to each other and take care of each other.

I'm not trying to point my finger at anyone. I know that it's hard to talk to people who disagree with us on such a deep and personal issue. We are literally debating the value and worth of real people's lives, whether they deserve rights, and what all of that means. I am one of those people. And while I sat through three-hour-long interviews with people who are against gay marriage and homosexuality in general, I tried hard not to clinch my fists or cry until after we left. It's hard. It hurts.

But I still think it's important to try.

AJ: Isn't it most important for people who disagree with your stance to watch this film? How do you hope to get it in front of those viewers?

Becca: Yes and no. I also think it's very important for pro-equality folks to see this, so that they can gain insight into some of the stories of those they disagree with. I formed wonderful relationships with individuals who supported the amendment. I'm hoping that people on all sides of this will realize that we are all people, and that we should respect each other.

I do think it's important for those on the opposite side of the issue to see the film as well, and I definitely think that it'll be harder for that to happen. A good place to start is with the people in North Carolina who were actually featured in the film. We're hoping that they'll want to share the film with their communities.

Another thing to remember is that a lot of people who are pro-equality have family members who do not approve of homosexuality or gay marriage. I'm hoping that those people can share this with their family members, and it will help everyone gain insight into each other's situation and start an open dialogue.

Be sure to check out Becca Roth's Kickstarter page for One: A Story of Love and Equality by clicking here.