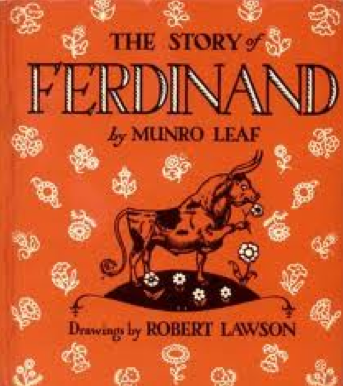 The Story of Ferdinand by Munro Leaf was published in 1936, just before the Spanish Civil War. Because it was widely viewed as pacifist propaganda, it was banned in many countries. Despite its rough start, it became popular around the world, has been translated into over sixty languages, and won several awards. This book has been beloved by three generations in my family -- my father, myself and my brothers, and my daughter. I related strongly to Ferdinand as a child and still do. He is more than just a symbol of peace to me; he is also an outsider, bullied for his gentle ways.

Recently my special fondness for this story grew even stronger. I happened upon a list of books about gender transgression, and topping the list was The Story of Ferdinand. Talk about an aha moment! I suddenly realized that the qualities I had loved about this book as a child -- and that my daughter had loved when I read the book to her as a little girl --revolved around a character who bucked stereotypes. Ferdinand was sweet, loving, and gentle and he did not want to fight. He was not traditionally masculine. In fact, he was actively resisting gender norms! The Story of Ferdinand is possibly the first modern children's book written about a character that did not want to perform his or her gender as expected. The arc of the story follows a common pattern seen in later books, namely that a "child" does not fit the expected stereotype, the "parent" is worried, and then the "problem" is solved in a happily-ever-after fashion. Cork trees and flowers or their equivalent. The plot is resolved with love and the acceptance of difference.

Why do we categorize behavior so rigidly by gender? It is harmful to everyone, but especially to growing children. A girl past a certain age who likes to climb trees might be called a tomboy. Why? Is tree-climbing not a gender-neutral kid behavior?

A boy who likes to play with dolls might be called a sissy. Why? Is pretending to care for a baby not a way of practicing parenthood? For some reason we encourage that behavior in girls, but not in boys. And then we talk about wanting men to be more nurturing fathers to their children.

As difficult as it was for me at times to be raising a daughter who was considered a tomboy, and who provoked comments from others about me somehow falling down on the job of teaching her to be more feminine, it was not as hard as I think it is for parents of sons who are considered not masculine enough. It seems more socially acceptable to be a girl who gets dirty and likes bugs than to be a boy who likes dolls rather than footballs and does not want to get dirty. For many parents and other adults in the lives of boys who are not traditionally masculine in their interests and behavior, there is real fear. Fear that this boy might be gay. Disgust that this boy is like a girl, because being feminine is considered a negative trait for boys growing up in a patriarchal society. There really is nothing worse boys can be called than like a girl. As a female, that offends me!

So how can we help children broaden their view of what it means to be a boy or a girl in their highly gendered world of play and our culture of marketing to stereotypes? We can use books, movies and other media to open dialogue and deconstruct -- and subvert -- those messages.

Here are some discussion questions about the universally beloved book The Story of Ferdinand that parents, teachers, and other adults can use with young children to help them understand it more deeply and recognize the ways that rigid gender roles hurt everyone:

1. How would you describe Ferdinand? How was he like other bulls? In what ways was he different?

2. In what specific way did Ferdinand assert his own identity? What was expected of bulls (males) and how did he respond to those expectations? Do you think he showed courage?

3. Is it easier or more difficult to go along with the group and do what others want you to do, or is it easier to be yourself?

4. Ferdinand's mother was worried that Ferdinand might be lonely sitting by himself all day rather than playing with all the other bulls. Do you think Ferdinand was lonely? What else was his mother worried about?

Prompts:•Was Ferdinand a fighter like other young bulls?•What did he most love to do?•Is that something usually associated with males or females?•How are males who act like females often viewed, and vice-versa? •Do you think it is harder to be a male who is viewed as too feminine or a female who is viewed as too masculine, or is it about the same?

6. The last two pages of the book say, "And for all I know, he is sitting there still, under his favorite cork tree, smelling the flowers just quietly. He is very happy." What does this mean for you? How important is it to find your own happiness, despite what the world thinks it should look like?

Go forth and help children challenge these gender norms. It's low hanging fruit!

Lori Day is an educational consultant and the author of Her Next Chapter: How Mother-Daughter Book Clubs Can Help Girls Navigate Malicious Media, Risky Relationships, Girl Gossip, and So Much More. You can connect with Lori on Facebook and Twitter.