When I was fifteen, I took my first driver's ed class.

I was excited. I had studied the rules of the road; I had my permit neatly folded in my genuine faux leather Duran Duran wallet. I was all about getting my license because once I did, my dad was going to let me drive myself to school in the butter-colored Renault Alliance that was in our driveway. Driving meant freedom. Driving meant that one day, one day so, so soon, I could drive right out of suburbia and drive right into someplace I was meant to be. Like Paris.

(Do not interject with your "Don't you know you'd drive into the ocean, you moron?" stuff right now. You're ruining the moment. This was my first driving lesson. All my dreams were coming true. Let me have this one.)

That afternoon my mom dropped me off at the public school where driver's ed was offered. I waited patiently for my instructor to arrive and when he did, I got to climb behind the wheel of a car for the very first time.

It was awesome. Totally. Totally.

Butterflies zipping around my stomach, I looked at the instructor. Patient and kind, a little balding, he was known as a nice man. He smiled at me, reassuring. I smiled back and asked what he wanted me to do.

That is pretty much the last thing I remember.

Turns out that what he wanted me to do was start the car and drive out of the parking lot, down the road, up the ramp and right out onto the freeway.

Much later, while he was pressing a wet paper towel to my tearstained face and explaining to me why I didn't need to ever tell this story to my mother (my mother who makes Khaleesi and her dragons look like Winnie the Pooh and would have removed his limbs), I learned the instructor had gotten his schedule mixed up. He had mistakenly thought I was another, more experienced student.

Just before my mom arrived, I asked him what had happened.

"Did I hit anything?"

The phrase blood drained from his face is real, y'all. I saw it happen to the instructor. That's the first time I realized that I had been scared literally out of my mind.

That is the first time my brain was wiped clean by fear.

That was the first painting removed from my wall.

When the driver's ed instructor told me to turn onto the ramp that led to the freeway, why didn't I put my foot on the brake and put the car in Park and look at him and say that one word that would have changed everything? That one word that might have kept the paintings from ever being at risk?

No is a powerful word. To me, it's the single most powerful word in the English language. Said clearly, strongly and with enough frequency and force, it can alter the course of history.

What if Rosa Parks doesn't say no? What if Rosa Parks says Yeah, okay, fine, dangit, I'll give up my seat and move to the back of this bus? The Montgomery Bus Boycott does not have its exact perfect hero -- a lovely, genteel lady, kind and firm, a lady who captures the imagination and conscience of America -- and maybe never happens.

My father's people are from Alabama. As are some of my mother's. If the bus boycott doesn't happen, does it alter the course of their lives? Do they never meet in Chicago? Am I never born? Would I be sitting in my house writing this in Los Angeles, California, today?

Why, hello, narcissism. It has been pages and pages since we've seen each other. How you must have missed me.

Yes. Yes, I just suggested that Rosa Parks's saying no on that bus is about me. Did you think I wouldn't find a way to bring everything right back to me?

If I can't make an entire civil rights movement about myself, well . . . what is the point of being a self-centered American? Did I tell you that you had to make Rosa Parks's amazing sacrifice about you?

Most powerful word in the English language.

See, you were trying to tell me about my ridiculous self and I just shut you down.

Roll with me, friends.

When I was making the pilot for Grey's Anatomy, we were lucky enough to work with a seriously brilliant casting director named Linda Lowy. Linda, who by the way is one of my favorite people, has a way of just knowing when an actor will be the key that fits the lock that turns the story in my brain. Linda and her partner, John, have put together every cast of every show I've ever done. Now we have a shorthand.

I'll call her up.

Linda, who is refined and elegant, does not say the thing my friend Gordon would say, which is "Everybody needs a man but you especially need one. Look how tightly you are wound. Get your client to a meeting now!"

Linda probes a bit to find out what kind of man I'm looking to cast and for what and then she hangs up the phone and a week or so later, she'll be on the phone telling me that she has found me a man.

And that man will be Jeffrey Dean Morgan. Or Eric Dane. Or Jesse Williams. Or . . . I could keep going forever.

When I met Linda, I was new to TV. I was new to casting. Heck, I was new to removing my pajamas during the workday and leaving the house -- up until the pilot of Grey's Anatomy, I'd been a movie writer working at home. It was all new to me. And I was so darn happy to be in shiny TV world -- wide-eyed and corn-fed and bubbly about it all. Everyone was showing me the ropes and I was just along for the ride.

Everyone was pushing. Betsy was pushing. The studio was pushing. I was dodging phone calls. I was saying vague things. I was telling people that I needed to think.

These were the very early days, before we'd even shot a single frame of footage. I was incredibly excited but the introvert in me was regretting being at the epicenter of a production. Everyone kept asking me what I wanted to do. In those early days, I was scared to have an opinion because I was afraid of having a different opinion than everyone else.

Betsy kept staring at me, bewildered. Who in the hell had replaced Shonda with a weird pod person? Because the Shonda she had known during the writing process had been enthusiastic and opinionated. Now I seemed to be fading. I kept my head down and avoided looking at her.

One morning, Linda called me at home. I'd only known her a matter of weeks and at this point, I'm fairly sure she thought I was a moron who did not know how to speak because I only mumbled to say things like "More cookies," "I don't know" and "I need to go write more" before escaping the room.

Linda got me on the phone.

"Shonda," she said firmly, "you are wasting time. You are wasting resources. Actors are being snapped up by other shows every other minute. We are at a standstill because you will not say what you want. You and I both know you do not want to cast this actor. So you need to say so -- so we can move on and cast someone you do want. This is your show and if you cast someone you do not want, it will not be your show. You need to tell everyone no."

We got everyone else on the phone. As everyone poured out their reasons for why this actor was going to be the perfect Cristina, I could feel Linda breathing on the line. She was waiting for me to speak up. If I say no, they could decide I don't know what I'm doing and take this whole thing away from me, I worried. If I say no, they could just do what they want anyway.

I had never asserted myself before. There was a pause.

Betsy tried to reason with me. To her, I'm sure I sounded a bit crazy. I'd been so busy mumbling and being along for the ride that I'd never said a word. As far as she knew I loved the actor.
"But, Shonda--"

There was a pause. Then I heard Betsy's voice rev up. Now I can tell you that energy comes from excitement. There is nothing Betsy loves more as a producer than someone who actually has a creative vision and isn't afraid to fight for it.

"Okay," she said. "No on that chick. Okay!" I could also feel her relief. Shonda had returned. I was just as relieved. That was my very first no at work.

My first moment of asserting myself as the leader, the captain of what we all thought was going to be a tiny sailboat called Untitled Shonda Rhimes Pilot but turned out to be a gigantic ocean liner called Grey's Anatomy.

My first NO. And my favorite NO. Because of that NO? I decided that I was steering the
ship. And I started behaving that way. I started behaving like the thing in my brain was our only true north. And that we would be guided by it no matter what.

Because of that NO? Sandra Oh walked in the door the very next day. The lock in my brain found its key. Cristina Yang was born.

No is powerful. It's a big weapon to have in your arsenal. But it is a very tough weapon to deploy. 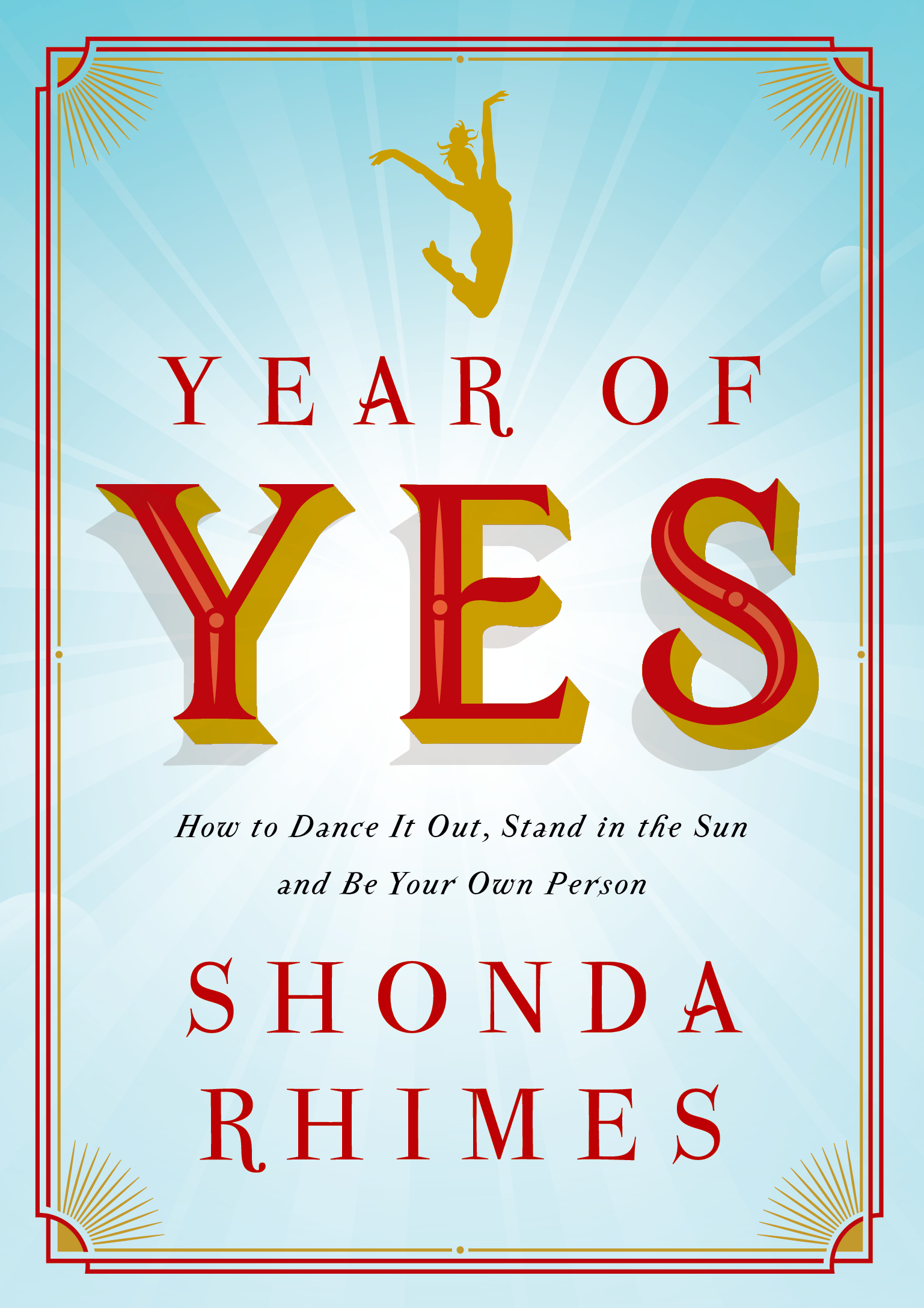 From YEAR OF YES by Shonda Rhimes. Copyright © 2014 by Ships At A Distance, Inc. Reprinted by permission of Simon & Schuster, Inc. All Rights Reserved.

PHOTO GALLERY
'Scandal' Stars Before They Were Gladiators ... And Villains
Download
Calling all HuffPost superfans!
Sign up for membership to become a founding member and help shape HuffPost's next chapter
Join HuffPost

The Story of My First and Favorite 'No'
'Scandal' Stars Before They Were Gladiators ... And Villains