By this time tomorrow, the mediasphere will be awash in touts and strategists discussing why tonight's midterm vote went down the way it did, and What It Means for the establishment political parties. You'll hear a lot of mythmaking driven by winners who want to gloat, losers who want to deflect blame and promote pleasant-sounding spin, and pundits who are forever locked in a game of one-upsmanship to determine who can craft the most byzantine-sounding pointless mystification of the political process they can -- all for the hope of heaping glory on themselves. 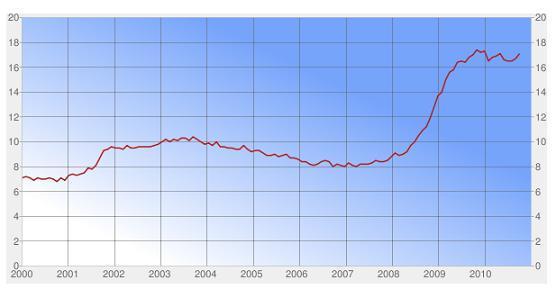 What you are looking at is the U6 unemployment rate. The U6 aggregates the following groups of long-suffering Americans in one trend line: the official "unemployed," "discouraged" workers who have stopped seeking employment because they believe none is available, workers who are considered to be "marginally" or "loosely attached" who'd very much prefer to work but haven't had any recent luck, and underemployed workers -- those who have found part-time work but would, under optimal circumstances, be ready and willing to work full-time.

As it stands, the U6 rate is up in the vicinity of 17%. That means about one in six Americans find themselves in this category. That also means that the vast majority of people who are fortunate enough to not be part of U6 unemployment likely know someone very dear to them -- a spouse, a sibling, a parent, a son or daughter, or a close friend or loved one -- who is experiencing the worst of this economy.

In this environment, it's really difficult for Americans to have any real fix on an optimistic future. It's hard for many to plan for that next vacation, the next new car, the next year of paying for your kid's college tuition, the next big purchase or repair for that refrigerator that seems close to keeling over. For some, the "future," such as it is, recedes to a matter of weeks or even days. The next rent payment. The next meal.

So, it's tough to be passing laws -- even effective ones -- whose main selling point is benefits that will kick in around 2014, or will drive down long-term structural deficits over the next ten years. It's hard to feel good about jobs that were created or saved -- and there were many! -- when you aren't the beneficiary of such a boon or your rescue is offset by a loved one who is still in need. It's hard to be told that growth is occluded by a set of lagging indicators, when the lagging indicator is you.