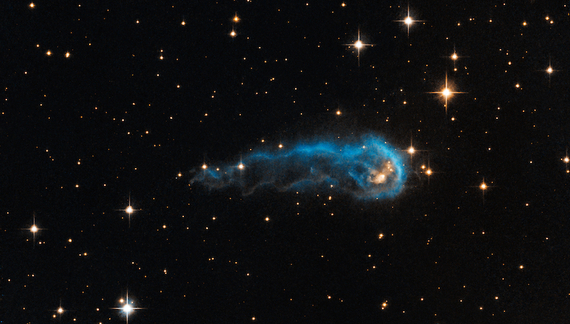 The future of travel is now! Kind of. These predictions for how humans would be able to get from Point A to Point B simply never came to be.

CNN reports that Virgin Galactic, Virgin Group's spaceflight company, has unveiled its new spaceplane: the VSS Unity. This new model is a replacement for the one that crashed during a test flight back in 2014.

While this is an exciting development in the realm of space tourism, I'm a bit dubious about how much this announcement actually matters (especially to those without a few million dollars lying around). We don't have to go too far back in history to see examples of predictions, prototypes and concepts that, while innovative and imaginative at the time, are just absurd today. What we imagine the future will look like almost certainly won't become reality. So before we get ahead of ourselves, here are some past predictions of the future of travel that never came true.

The most futuristic thing to happen in 2001 was the release of the first generation of iPod. But if Kubrick's future was to be believed, humanity should already have been well on its way to colonizing the solar system.

But in reality, we didn't really know what was up with the surface of Pluto until last year. And we're (sadly) nowhere near an Ikea-furnished moon base. We're a bit closer to finding alien life in the massive hunt for exoplanets with the Kepler observatory and the upcoming Transiting Exoplanet Survey Satellite. But no word on any monoliths just yet.

To be fair, the present and recent past has had some space tourists. Well, seven of them--and for a minimum of $20 million. Not exactly doable on most salaries.

And to think that back in 1968 Pan Am Airlines started a waiting list for anticipated commercial flights to the Moon. They seemed to think we'd be vacationing on a terraformed Lunar landscape, soaking in the sun on the bio-domed beaches of a flooded Mare Serenitatis well before 2016. No such luck.

The VSS Unity brings humanity a bit closer to the dream of civilian space tourism. Registering to fly on Virgin Galactic comes with a $250,000 sign-up fee. Still not for everyone, but a promising step in the right direction.

A whale bus and rideable seahorses

This future form of transport was ideated by French artist Jean-Marc Côté at the turn of the 20th century. In his version of the year 2000, all French citizens are familiar with whale-based aquatic transit. 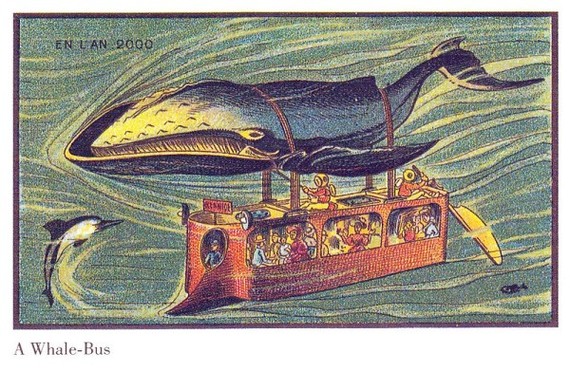 Instead they have the Channel Tunnel. An engineering marvel? Sure. But not nearly as fun.

Along with conventional predictions of personal flying machines (Côté wasn't too far off in this case) and machines replacing humans in the service industry (that's been happening for awhile now), Côté seemed to believe humanity would have colonized the deep sea long before space. There's a notable lack of rocket ships and interstellar travel in his illustrations. Instead we get seahorses genetically modified to be ridden like land horses. 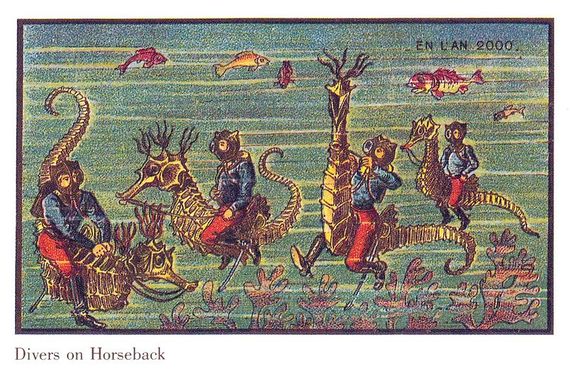 His electric scrubber is by far the closest to something we have today. It's basically a steampunk Roomba. 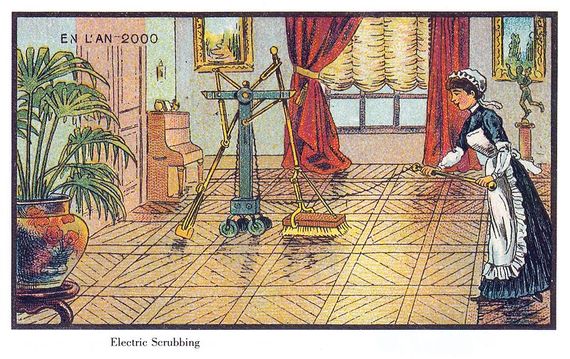 Ah, the flying car. No other future object comes close to being as coveted, as oft-predicted and as-of-now still totally not a thing. Which is a bummer, because flying cars would be great. Except logistically, or in terms of fuel efficiency, or safety, etc. People can barely drive in two dimensions; introducing a third seems like an awful idea.

There have been some recent developments in the realm of flying personal transport. Aeromobil has been teasing the human race with nifty prototypes for years now.

But their designs are really more an airplane that can also drive on the road if you want. It's an intriguing piece of engineering, but still far from the futuristic crafts predicted throughout the years.

Who knows? No one, really. But I'm fairly certain whatever we think of will mostly be wrong.

That said, I'd like to offer up a divination of the future of travel. It won't be nearly as glitzy and chrome-covered as we'd like to imagine. If anything, it's going to get a lot more cramped. So, so cramped.

Don't just take my word for it. Check out what Slate wrote on an Airbus patent that would have coach passengers stacked on top of each other--because shrinking seats isn't enough. Or how about just getting rid of seats for good?

But it might not all be terrible. There are some interesting, if not bizarre, concepts and designs out there--mostly featuring massive windows and viewing decks. I can't wait to see what happens. At the very least we'll get a nice view out of it while all crammed together.

Sam Wright Fairbanks is an editorial fellow at Map Happy.