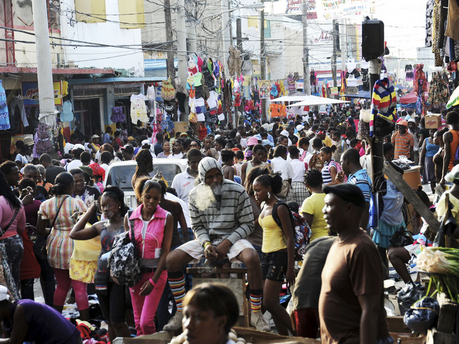 According to a 2011 study conducted by Yale Center for Research on Inequalities and the Life Course, 42 percent of African-American women are unwed -- which is double the percentage of white women. [1] I would classify this as a major problem, flirting dangerously close with becoming an epidemic. Immediately, when I hear such a statistic the problem solver in me springs right into action. My mind starts working in overdrive to uncover the root cause.

Many scholars have already examined the problem and offered up a barrage of plausible explanations. They've cited everything ranging from the disproportionate population of black woman to black men in American, black male incarceration rates, interracial dating, to the growing rate of gay and/or down-low brothas within the black community. While all factors are undoubtedly contributing to the problem, I have a much simpler theory. I refer to it as the "street merchant" paradox.

A few years back, my wife and I went on a cruise to celebrate our anniversary. It was a week-long tour of several islands along the Western Caribbean. About the fifth day, everyone was called down to the auditorium for a mandatory safety briefing. Our next scheduled stop was Ocho Rios, Jamaica. The crew wanted to make sure everyone -- who planned to leave the ship -- understood the rules of engagement when interacting with the locals.

"Don't talk to anyone unless you're interested in buying something," one crew member emphatically said.

Then, he went further to say...

"If possible, try to avoid eye contact all together."

I thought to myself, "Is it really this serious?"

It wasn't until the ship docked and we walked down the ramp into a sea of street merchants that I fully understood the gravity of the situation. I found myself relying on my training as we attempted to work our way through the makeshift marketplace at the foot of the dock. It's hard to ignore people when they are coming at you from every direction. But with a stiff neck and eyes fixed on the horizon, I clinched my wife's hand and we made our way to the other side.

This passive-aggressive strategy of eluding people is not limited to the Jamaican marketplace. Here in America, black women have mastered the art. They use it quite successfully in avoiding potential husbands. If statistics suggest that 42 percent of black women are unwed, why would they deliberately avoid interacting with their male counterpart?

It would require the use of a scientific calculator to count how many times a day I cross paths with a black woman -- work, church, gym, store -- and she won't even make eye contact, let alone say, "Hi!" As a married man, it doesn't bother me because I'm only attempting to be cordial. If I were single and looking for a partner, this interaction (or lack thereof) would be very disheartening.

On the surface, black women's behavior appear rude and standoffish; but their actions are not without merit. Contrary to popular belief, we don't live in a society full of bitter and angry black women. This anti-social behavior is simply a defense mechanism. From the point they leave the house until they return home, black women are bombarded by black men approaching them from every direction. As a result, black men's uniqueness has been watered down. We are merely viewed as a bunch of street merchants unidentifiable amongst the masses? We might have a different pitch, but we're all selling the same thing. Thus, there is no motivation for black women to want to entertain a conversation.

If I am accurate in capturing black women's perspective, how do we change the general opinion? More importantly, how do we restore the institution of marriage within the black community? The lines of communication between black men and women have to improve. One simple suggestion I have for all the single black ladies out there is to "Just Say Hi!" Obviously, there is a risk in speaking because there are some egotistical, self-absorbed black men out there who will interpret your "Hi" as something greater. If it is something more, continue to explore the possibilities. If not, promptly and sternly end the conversation and wait for the next black male encounter.

This trial-by-error approach can bring about a lot of headaches, as you will come in contact with all sorts of personalities. But I see no other way to address the issue. While unpleasant at times, it's a necessary sacrifice for the greater good of the black community. If we continue to trend down the current path, the number of unwed black women will grow from 42 percent to 62 percent in the blink of an eye. So if not for you, do it for all your fellow single ladies out there.

Torri Stuckey is the author of Impoverished State of Mind http://www.amazon.com/Impoverished-State-Mind-Thinking-Outside/dp/0615659594