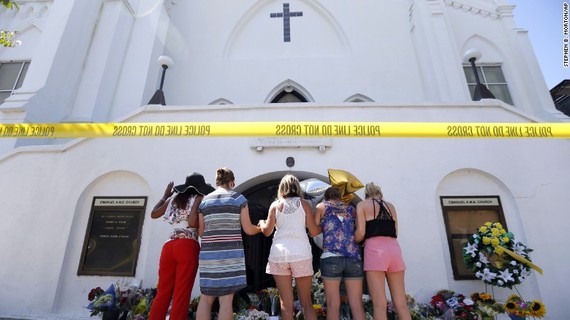 There aren't many think pieces left.

We're running out of masterfully articulate prose and piercingly sharp rhetoric. The painfully unsettling stories carved into the dark pages of America's history have been endlessly highlighted. We've drawn countless circles around words that reflect the systematic crippling of our communities.

Passionate protests have provided nationwide platforms to face the sobering realities of racism, oppression, injustice, inequality and discrimination - but there's an element missing.

Despite distinguished scholars and progressive political leaders clearly and brilliantly addressing the asterisks of skepticism, criticism and confusion that come with layered concepts such as white privilege, white guilt and classism - there is still something missing that keeps the message from connecting in an impactful way.

While we can search for more creative and contextual ways to amplify the politics of race and privilege that continue poisoning society - nothing changes without acceptance of truth and assuming accountability for that truth.

History is pointless to people that deny it. More specifically, the tragic and malicious consequences of racially charged hatred provokes no emotion in people who are not forced to deal with the truth, because they have been subconsciously granted immunity from it. Those people are white people.

One simple, yet undeniable fact stands: racism not only exists, but the mechanical dynamics of it, both psychologically and systematically, are rapidly rotting the sense of humanity that remains in the United States. As the deep-rooted divisiveness of racism continues to erode what we perceive to be steady social progress, it's becoming more inescapable than ever that America is insensitive to its own afflictions.

In America, race is socially constructed. While racial superiority is, in essence, a shameful myth, the practiced ideology of racial hierarchy exists as the nucleus from which all deciding aspects of this country are structured and operated. This accounts for the economy, educational system, legal system, and judicial system. Even with the institution of slavery seen as a distant memory - that has not changed, nor has it been forcefully dispelled from the framework of western society.

As a result, what we see too often are sensible solutions, definitive demands and accurate assessments of explicit biases meeting blind eyes and deaf ears. To heal the gaping wound that has infected race relations in America, white people would need to take responsibility for their role in the ongoing attacks against black and brown people.

Instead, America is blind to its own racism and in denial of its own ignorance. It is impossible to show a blind person what you see. It's also impossible for a deaf person to hear what you're saying. In the United States, privileged white people consciously and subconsciously avoid accountability for their actions as a people - while attributing the faults of America to a skewed public perception of the black experience. A perception that fails to note the ways in which a history of racism and white privilege caused the disparities in wealth, mass incarceration, the drug epidemic, the poverty crisis, and the spark that fueled the rapid emergence of black on black crime.

As stated in my previous piece, it is not a secret that America was built on the backs of enslaved and exploited minorities. The brutal realities of our history haunt this nation to such a degree that reliving them through music, motion pictures and intense dialogue is often too piercing for white people to digest.

To properly address the issue of racism and appropriately deprogram the fraudulence of its foundation, white people would have to accept that everything America has been built upon, structurally and systematically, is birthed from a vicious lie.

Prejudices are universal. Every living person, based on our exclusive and unique set of experiences, holds pre-judgments of people, places and things we encounter. That's human nature. It's a challenge each of us, regardless of race, must honestly confront within ourselves and work to operate in truth before assumption.

From childhood you're taught what's right and what's wrong - who is accepted and who is not. Racism is a learned weapon of hatred.

Racism is a direct reference to an enforced racial hierarchy rooted in power and privilege. You can't call black people racist, because black people are not beneficiaries of privilege -- the superiority complex that fuels white supremacy.

Until our efforts penetrate the spirit of Dylann Roof's throughout the south, Middle America and beyond, the fight to end such atrocities like we've witnessed in South Carolina will prove to be an unachievable goal. Until millions of white people march the streets, soaked in tears while lifting signs that say black lives matter, the change we so relentlessly seek will not be realized. Until you can show up to work amongst your white coworkers and see them naturally concerned about the troubles of black and brown people, there is an abundance of work to do. Until the lives, lifestyles and social conditions of the privileged are threatened - headlines of black deaths will be recycled for decades to come.