My friend Captain Jerry Coffee spent seven years and nine days in Hanoi as a prisoner of war in the Communist prisons of North Vietnam.

While flying reconnaissance missions over North Vietnam, piloting his jet fighter, Captain Coffee was shot down by enemy fire. After parachuting to safety, he was captured by enemy forces on the ground.

Sept. 19th 2014 is the day, the United States celebrates POW/MIA Recognition Day, where we take just a small moment of our self-absorbed day to reflect on the sacrifices our soldiers, airmen, and Marines have endured when they have been captured by the enemy. Today we don't need to debate the age-old discussion about a justifiable war, a winnable war, when war is right because today we just need to reflect on the sacrifice and share our appreciation for those when they have been captured by the enemy. We'll never know the pain, suffering and misery they have had to endure but at the least we can seek to understand and learn to appreciate their struggles for our country.

I met Jerry Coffee a few years ago when I asked him to speak at a fundraiser for my nonprofit. I had heard of his legendary courage and how he had committed his life to fulfilling his mission of telling the world that anyone under the same situation could have survived the same struggle he endured. He told his story in a book titled "Beyond Survival," and his unofficial motto espouses to others that in order to survive such a horrible event you must believe in yourself, your God and your country.

Captain Jerry Coffee spoke at my event, like he has done thousands of times before as a Professional Motivational Speaker, and told his heroic story about being shot down over Vietnam, his capture and captivity. His prisoner of war story concluded seven years and nine days later when he was finally released after the end of the Vietnam War. His brutal incarceration is incredibly hard to truly understand or appreciate unless you hear him tell it himself. Seven years and nine days is 2,564 days, something I can't even fathom. Seven years is a quarter of my total life that I lived up until this point today.

Listening to Jerry speak that night at my charity fundraiser cemented in my mind what a gracious human being he is to volunteer his time and talent to put his remaining years on earth into telling the story so others can be inspired. He inspires others to make this world a better place. 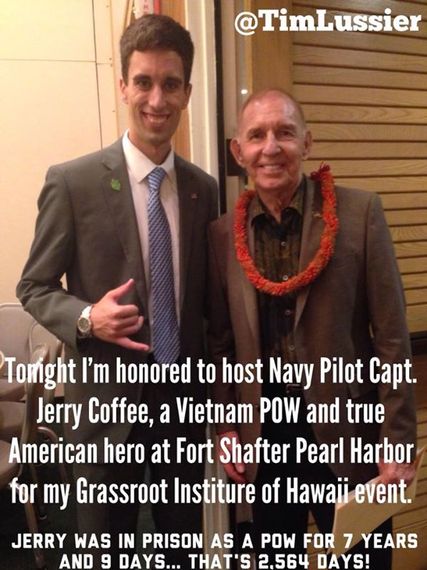 This summer, Jerry turned 80 years old. Family helped Jerry celebrate his birthday on June 2nd which is also the same day as my Mother Barbara, two people I truly cherish! On his birthday I emailed him and asked him if I could take him sky-diving at SkyDive Hawaii, just like George H.W. Bush did for his 90th Birthday this year. 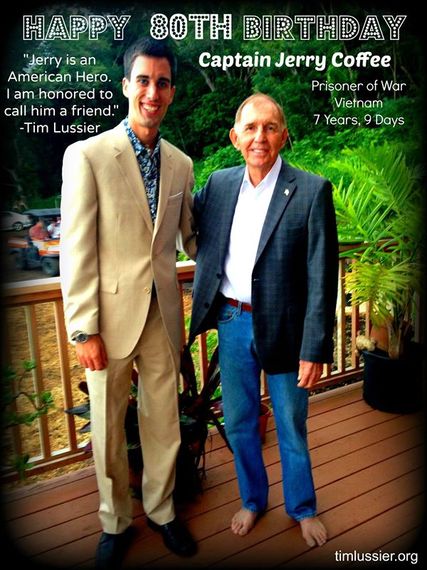 This summer I also had an intimate lunch with Jerry and his wife Susan Page on their patio overlooking Pearl Harbor on the island of Oahu in Honolulu, Hawaii. We discussed how I could help tell his story to the next generation. I asked for his blessing to do a full-length documentary on his life because I told him I was committed to sharing his story, an eternal piece of history, a story that must be told to all generations to come. 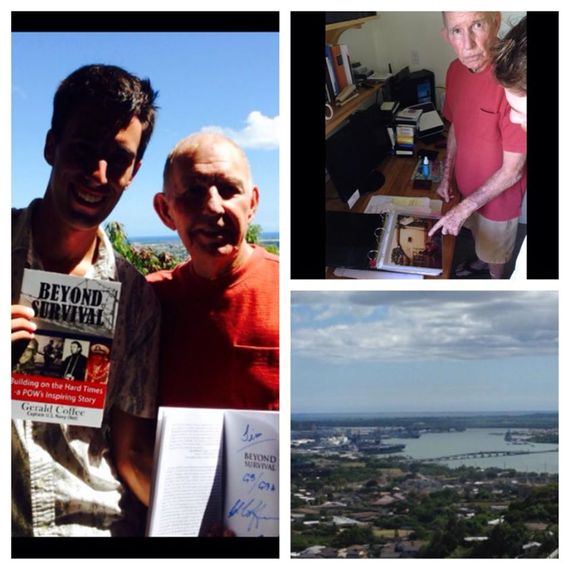 On that day, at his home, Jerry took the time to show me through his personal library and collection of all his medals, clippings and show me never before published artifacts. They are truly monumental pieces of history. I was stunned to learn how Jerry so casually and humbly told me how flying his Jet Fighter over Cuba he had inadvertently gotten photo reconnaissance of Russian weaponry hiding in Cuba. This literally changed the course of the Cold War and undoubtedly saved countless lives by giving the U.S. the most important intelligence during the infamous Cuban missile crisis. For the heroism he was awarded the Distinguished Flying Cross for these heroic low level reconnaissance missions over Cuba and helped stop the U.S. and Russia from going over the brink of Nuclear War. Jerry signed a copy of his book for me, which is now one of my most prized possessions. 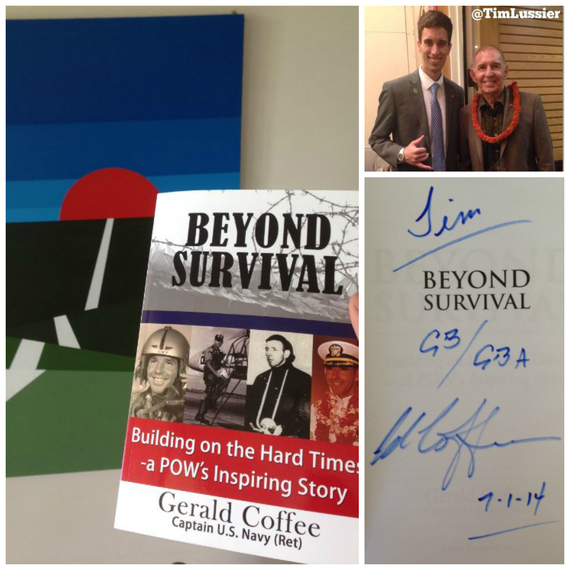 During his time as prisoner of war, Jerry had a tap-code, a Morse-code like system the prisoners used to communicate with each other. You must watch his YouTube videos as he explains this system. Every night for those seven long years he would tap on his brick wall in his jail cell "God Bless | God Bless America" and in every email and conversation with him I've ended my statement to him with this phrase.

Jerry deserves to spend his retirement in grace and comfort. He's spending his sunset years exactly where he wants to be: with the love of his life, overlooking the sunset and Pearl Harbor. His home is next to Camp Smith, where a giant American flag dedicated to America's POWs and MIAs waves 24 hours a day, seven days a week.

Jerry, today and every day, I salute you for your friendship, and for teaching all of us to be inspired. I thank you for your sacrifice for our country.

ABOUT THE AUTHOR:
Pursuing Happiness is a column Tim Lussier writes where he explores solutions with a conservative insight on political, business and community affairs in the very beautiful state of Hawaii. A public relations, digital and political professional, he has served on many local, state and national campaigns including the 2012 Romney for President campaign in Boston, Mass. Lussier holds a Master of Arts in Communication from Hawai'i Pacific University where he served as Student Body President. Originally from Oregon, Lussier has lived in Hawaii for most the last five years.