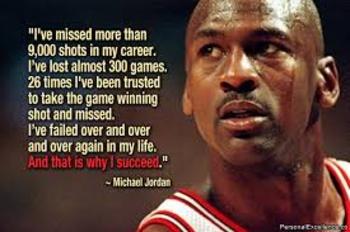 Despite being admired for his astonishing achievements in sport, one of the greatest NBA champions Michael Jordan often had to deal with failure. Speaking on the subject Michael Jordan once said

I've missed more than 9000 shots in my career. I've lost almost 300 games. 26 times, I've been trusted to take the game winning shot and missed. I've failed over and over and over again in my life. And that is why I succeed.(Brainy Quote)

In his statement Jordan demonstrates that failure is part of the journey to success. You do not need to give up if you fail at something. Keep on trying. That's what will make you successful in life. Do not be afraid to fail or make mistakes. Pick yourself up and move on. The more you fail the better your chances of succeeding. Each time you fail you will have learnt something that will move you closer to your success. 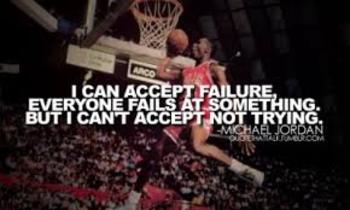 In life success comes with failure. This is a principle which teachers try to instill in students early in their academic journey. Students are asked to write corrections after failing an exercise. The teachers will be wanting to cultivate a culture of knowing that there are times when one will not be able to get things right. However the important thing would be to make corrections and move on to the next challenge. The idea of doing corrections is to ensure that a student learns from his/her mistakes such that next time they will not repeat something similar.

Likewise life is a journey that can be likened to that of a student. It is full of trials and challenges. You will never get all things right. Sometimes you will fail. However you need to make amends and correct your mistakes. This will make you a better person.

Failure is part of the success story. It is a stepping stone towards greater things. Allow yourself to learn from your mistakes.

You do not live in a perfect world. Thus life will not always flow perfectly. There are times when you will have to deal with failing at some point. It is how you react to failing that counts.

You will get something wrong at some point in life. However that does not mean you are a failure. You will only become a failure in life when you do not try again. Do not give up without a fight.

There is so much you can do in life. All you need is to be persistent and consistent in all you do. The more you try and miss the mark the nearer you are to your success. Most successful people in history have gone through terrible failures in their lives for example Henry Ford, Albert Einstein, Steve Jobs, Bill Gates and Abraham Lincoln. However they bounced back and became very great individuals in life.

You might have failed at something and lost what was important to you. Do not despair or lose heart. Learn from your failures and keep doing what you love.

Failure is never final. It just provides an opportunity to learn and start over again.

Adopted from my latest book More Than A Conqueror. Available for free download on www.peterchi.co.zw/#